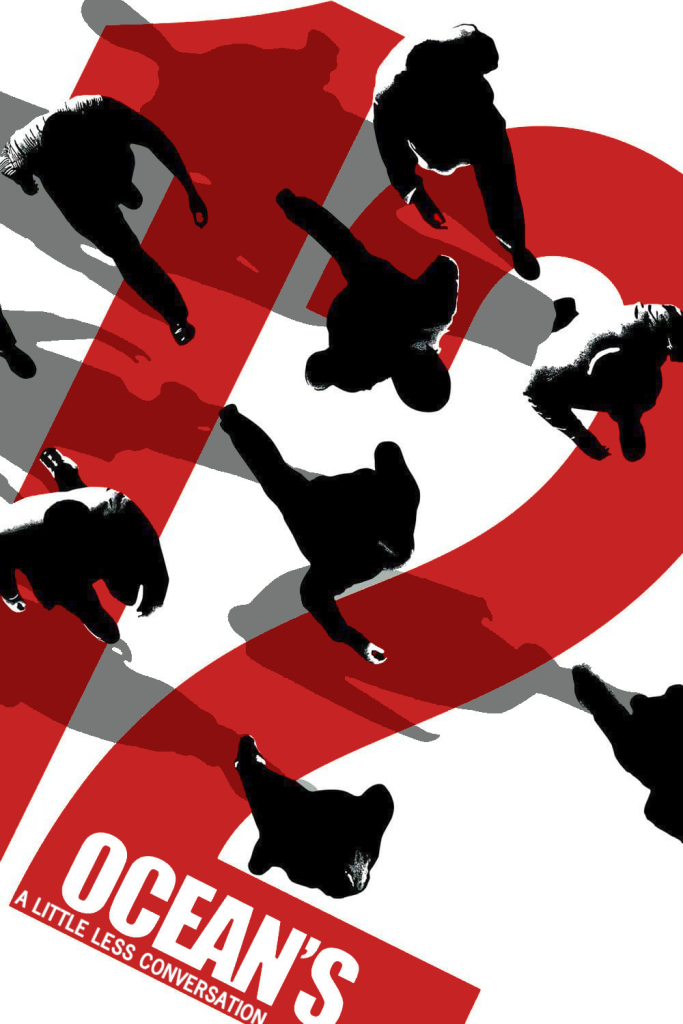 Brief Synopsis
Tony Benedict receives a tip from the Night Fox fueling his revenge on Danny Ocean and his team.

Intention
Ocean's 12 feels a bit off when compared to the magic that is the first and the good film that is the third installment. Much of this is due to extended scenes with awkward dialoguue that doens't add to the flow and a very non-linear approach to the narrative flow of the film. The main intention of this edit is to make Ocean's 12 feel more like Ocean's 11 & 13 by removing some of the scenes that go on too long, rearranging the out of sequence shots, removing the visual back story of Rusty and Isabel, removing Bruce Willis as a character and just tightening up the overall feel of the movie.

Other Sources
Stock footage of the Bellagio

Editing Details
The edit is pretty straightforward, two video channels (one for the logos at the beginning and the other for the main video track) and a straight 5.1 surround channel mix. Sources of the soundtrack are extended into and out of scenes to make the transitions smoother and give it that Ocean's feel.

Special Thanks
Anyone that is intereted in this edit

Current Edit List
+Add FE Logos
+Extend intro music
+Move Benedict receiving call from the Night Fox to the beginning of the film
-Removed Danny at the bank
-Removed Tess and the painter
-Removed the team's intros with Benedict
-Removed Linus talking to Rusty on the airplane
-Removed Linus talking to Reuben
-Removed meeting with Matsui (we don't really need to see it and it's just odd and we don't learn anything from it anyway, Danny and Rusty share the info after the meeting)
-Music replacement during Rusty and Danny's explaination of the Van Der Woude job
-Tightened up the group talking freaking out about the take on the Van Der Woude job
-Removed Linus's "freak" speech
-Rearranged scenes so the van der Woude job is continuous for the team
-Rearranged and trimmed scenes so Isabel's investigation of the van der Woude job is continuous
-Removed Reuben and Livingston's converstation waiting at the train station
-Color corrected teh scenes with Nagel to be less yellowish green
-Removed static "Rome" scene
-Edited audio of Isabel talking to Maricio about the 1077 to make the transition smoother as well as make the conversation move a bit faster
-Slight edits when Roman is showing the hologram
-Trimmed scenes when they enter the motel with Tess as Julia Roberts to remove all direct shots of Bruce Willis
-Reworked voice over scenes of the team freaking out while Danny and the team are in jail talking about odds of the rest of the team getting the egg
-Added stealing the Pinch music during the egg heist
-Trimmed all shots to remove direct shots of Bruce Willis
-Reworked and trimmed up Isabel approaching team to remove direct shots of Bruce Willis. He's now just a museum chauffeur
-Slight trims to Isabel and LeMarc reunion and Rueben and Benedict's final talk
-Cut "Monday Night" ending
-Movie ends with the Night Fox looking in the window after Reuben tells Benedict that they won't be involved with anyone trying to steal from him
+Added Fanedited by to credits
+Added Elvis' A Little Less Conversation to the ending credits
+Added Logos to end of credits
Last edited: Dec 21, 2021

The one thing that I feel like can never be fixed in this movie is having Bruce Willis think Tess is Julia Roberts. I HATE that type of meta stuff and it took me way out of the movie.
T

This sounds like a really neat idea. I haven't rewatched Ocean's 12 probably since it came out because it was so muddled and bloated compared to 11. It would be neat to see what a fixed version of the film is like, although I'll need to buy the source first to watch it.

How far along are you with the editing itself?

That One Guy said:
How far along are you with the editing itself?
Click to expand...

This one has sat in the mind palace for years, but I watched it the other day and thought I'd attack it. The first and second acts are pretty much done. I'm trying to find the best way to trim the Looky Lou con portion to get us through that section faster and make the actor playing themselves portion less or a distraction (it's not really a huge issue for me but as pointed out others don't care for it). I'd say editing is about 70% completed.

Elvis' original version or the Junkie XL remix? Consider adding a snippet of Elvis elsewhere in the movie to connect the end credits song more. Even if it's just on a radio inside the movie.

lapis molari said:
Elvis' original version or the Junkie XL remix? Consider adding a snippet of Elvis elsewhere in the movie to connect the end credits song more. Even if it's just on a radio inside the movie.
Click to expand...

Original all the way

I think I've got this one in the bag. Rendering the file this evening and will upload tomorrow. Look for this one on IFDB by the end of the week.

Showed some of the heavily edited clips to the Isabel to my Rusty and was told to call this "Ocean's 12: I Shaved This Movie" I think I'll stay with the Elvis reference, but it feels so great to have made something that we both can enjoy
You must log in or register to reply here.
Share:
Facebook Twitter Reddit Pinterest Tumblr WhatsApp Email Share Link
Top Bottom