A simple but efficient edit.

Not bad but I'd make it even shorter and cut to black after her gasp at 00:18

asterixsmeagol said:
A simple but efficient edit.
Click to expand...

Until the series is released in a buy-to-own format, please let's all stick to sharing ideas without showing/referring to actual clips that are already being made by people outside of FE.

Oh, you're right. It just popped up in my YouTube feed and I wasn't even thinking about how he got his source. Sorry about that.

This was a bad show: misconceived, badly written, badly directed, and, McGregor aside, badly acted. The character of Reva, in particular, is spectacularly incoherent: 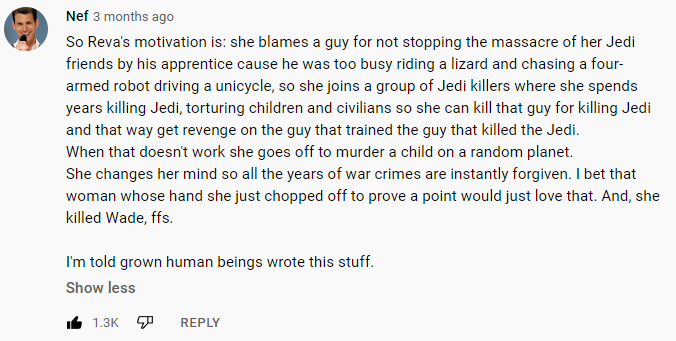 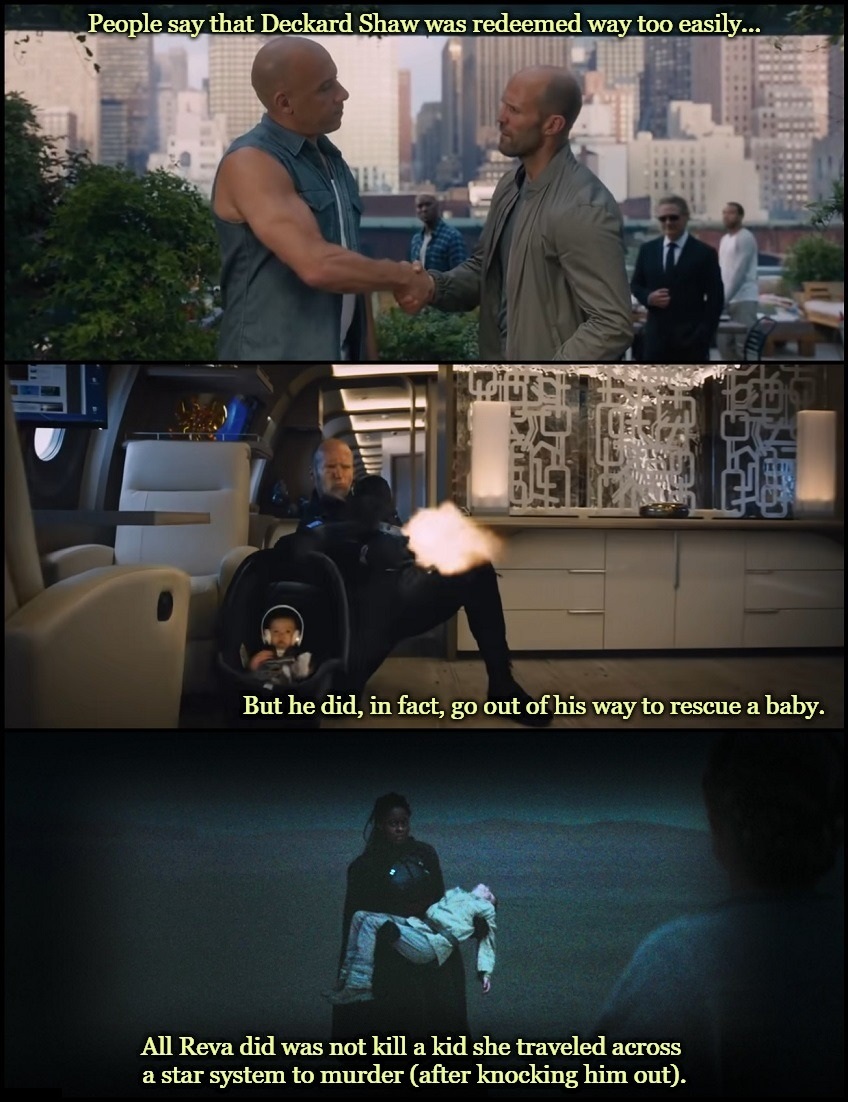 So, let's not hear from or see that character ever again, please.

The plotting is similarly arbitrary: on one day, Obi-Wan care barely use the Force anymore; a few days later, he's wielding Dr. Strange-level boulder throwing powers. Oh no, Obi-Wan got badly burned, and left his bacta recuperation early! Never mind, he can go on a big swim the next day, no problemo.

And did I mention the writing in general sucks balls? In ep.1, Reva randomly asks Owen if he's harboring any Jedi at his home. When he replies no, she asks why she should believe him. Um, because the odds of that are fairly astronomically small?! And don't get me started on how Obi-Wan and Reva agree to team up to take down Vader... by immediately splitting up. And why Vader leaves Reva alive for no reason whatsoever. (And why Vader didn't go down to that planet in the first place, sending Reva instead, even though he was right there on the same ship as her?)

(In fact, the whole concept of the Inquisitors is awful and canon-breaking. I've loathed the Rule of Two ever since it was introduced back in The Phantom Menace, because it meant the PT wouldn't have any cool massive Jedi-Sith battles. And it would be one thing, I guess, for Vader and the Emperor to be using Dark Side monks or underlings to help locate Jedi and Force-sensitive kids. But said underlings should under no circumstances be allowed to carry lightsabers; those should be reserved for Jedi/Sith only.)

In short, the whole thing is a deeply mediocre mess that only damages canon further.

And for Kathleen Kennedy to be saying earlier this year that Star Wars needs to move beyond the Skywalker saga, only to drag Vader, Leia, and Luke into a solo Obi-Wan series that in no way required them, sure seems like outright trollery.

Series grade: appropriately enough, I'll give it a D+.

Correction: Actually, I remembered in SW Ben does say the line about Owen thinking Anakin should've "stayed here and not gotten involved", so it's not TPM's fault for that one.
Click to expand...

Meh, it would have been far better to leave that line as an apparent continuity goof, or make viewers assume Owen was referring to a false history of Anakin he and Beru invented, and not return to Tatooine in the PT at all.

Thanks for the entertaining read. And yeah, this show was a mess.

But we can still expect Disney to come out with at least two shows out of that:
- Reva: A Star Wars Story
- The Adventures of the Kenobi Bros

I started watching this series.....after watching Andor, this looks and feels like a CW tv show. Angles are way too tight, the music is meh, lighting makes this look cheap, everything is way too clean, and so on. I don't mind the characters, I just don't care for the acting and storytelling of this series. A shame as Obi-Wan was the only thing I liked about the prequel era. I ended up fast forwarding through most of the show to find substance. Sadly there was little to find for me. This looks and feels like a high budget fan film.
You must log in or register to reply here.
Share:
Facebook Twitter Reddit Pinterest Tumblr WhatsApp Email Share Link
Top Bottom