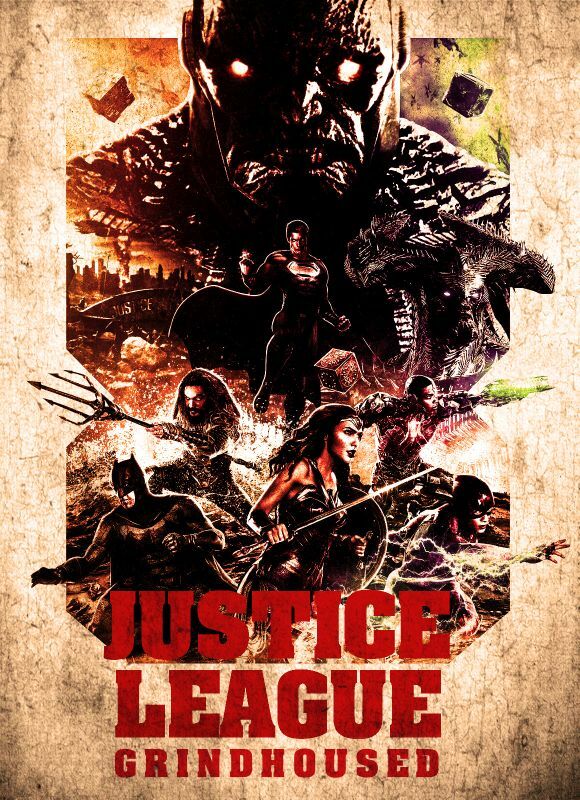 EDIT: The "Stage 2" edit is complete (at least I hope so), so this thread will now focus on "Stage 3 - Grindhoused" edit.

This time Europe is in luck, as we've got physical release earlier, so I'm finally able to start.
The goal is to use ZSJL as a foundation, reframe whole thing to 2.35:1, cut some fat, add some theatrical scenes here and there and get a running time around 3 hrs.

This project evolved through time, it will actually be three edits:

I intend to replace prologue with something shorter, here's first take on the opening sequence, unfortunately I wasn't able to find this clip in better quality.
Of course logos at the beginning will be replaced, and some more credits added (like Danny Elfman).

Some things which I will try:

- I'm toying with some ideas for a scene to put before opening credits, and there are two contenders - musem fight or Amazon fight with Steps.
- museum fight ends just like in theatrical cut, the whole sequence will be a mix of theatrical and ZSJL
- add some theatrical scenes like "save one person", "working with others" and some more
- [maybe] use Lois' narration at the end, but re-edit accompanying footage (especially shot with Silas still alive and kicking must go).
- I feel that Bruce searching for Arthur should take place after the history lesson, not before
- some Star labs stuff will be cut/shortened
- no knightmares or cyborg vision
- I will probably cut antilife equation and leave only cameo of Darkseid at the end

And maybe some re-scoring on top of that if audio track allow it.


PS. There's still no answer to my question for merging my old account (that was tied to old e-mail which I lost) and new one. It would be weird if that will be considered my debut, more than decade after my edits landed on this site for a first time
Last edited: Jul 18, 2021

Vilgefortz said:
- I feel that Bruce searching for Arthur should take place after the history lesson, not before
Click to expand...

All of the THIS.

That's exactly what I aimed for with my "New Studio Cut" draft. My titles come right after the history lesson and Diana asks Bruce where the others are, and the next thing after the titles is Bruce seeking out Arthur (and magically growing his beard, might want to add in a "few days later" caption before cutting to that)

The beard-continuity in ZSJL is debatable anyway. It looks like between the death of Superman, and Bruce meeting Arthur at least month passed by, so we must assume that much time passed between the moment Motherbox on Themyscira awakened, and the moment Steppenwolf acquired it? That's kinda weird (and doesn't really feel that way). So, moving Themyscira confrontation earlier, and Bruce's journey later seems like a good idea continuity-wise. When Bruce is searching for Arthur, Steppenwolf is still trying to locate second motherbox.
Last edited: Jun 4, 2021

- edit opens with Lois visiting Superman memorial place, some flashbacks to Superman's death occurs
- then Wonder Woman's introduction - bank scene (ZSJL version, with some few shots from theatrical added, and some little cuts, ends with similar fashion like theatrical cut), cuts to...
- Themyscira - motherbox awakens / Opening Credits
- after the credits Steppenwolf arrives / Amazon battle occurs (ZSJL version)
- Flash introduction - Iris scene, a little shortened
- Steppenwolf startinng to build his fortress, sends parademons to search for motherboxes
- Batman on the roof scene from Theatrical, but Bruce doesn't talk with the burglar at all. Alfred says "What the hell", Bruce responds "the scout", Alfred says "It's time then". No image of motherboxes on the wall.
- Silas leaving labs, janitor abducted as in ZSJL
- arrow scene
- Tomb Raider scene cut
- then Silas talking about the kidnapping, scene starts with "eight people never sign off", he comes back home
- Steppenwolf talk with De Saad.
- history leeson, no mention of anti-life equation
- after that, Bruce starts to search for Arthur...

One of my earliest edits had this opening too, though not without flashbacks, which is always better

Vilgefortz said:
Then, we have:

And it is 1h 33 min for prologue and chapters 1-3 (no chapter titles included though).
Click to expand...

Did you consider removing/trimming the Vulko meeting and perhaps using some of the TC for the fisher rescue due to the parademon blood?

Vulko stays intact at the moment. Maybe I'll look over it after I finish first series of cuts, if running time will be still too long.
And what's with the blood?

- beginning of chapter 4 replaced with Theatrical version up until the team reaches stairs and the bridge, because I prefer theatrical music, and it's a little shorter.
- from the stairs we're back to ZSJL, but I'm adding some theatrical bits here and there" "Save one person" dialogue (some patching with Elfman's score needed here), then actual saving by Flash, I'll probably use theatrical sword scene with the parademon chasing WW.
Last edited: Jun 8, 2021

Ok, so it;s time for a little trailer:

Did you regrade the Jo— sorry, theatrical footage to match that of the original director's?

Theatrical footage has been desaturated and some additional tweaks were made, but it still looks a little bit different. Nothing jarring I think.
Last edited: Jun 12, 2021

Gieferg said:
Theatrical footage has been desaturated and some additional tweaks were made, but it still looks a little bit different. Nothing jarring I think.
Click to expand...

Yes, I considered it (only the post credits scene needs it though), but I'm not able to use it yet, I'm going to see how it works, cause I was interested in deepfakes for some time.

As for the regrading - there are four theatrical shots in the trailer and one of the screenshots above is also TC.

When is the expected release window?

Beta version is 98% complete (just some finishing touches and a couple of cuts to add left to be done), but then some feedback would be appreciated before the final version.

I'm still considering creating additional audio track with some re-scores. But even if I do it, it ma be released later as an additional dlc

Gieferg said:
Beta version is 98% complete (just some finishing touches and a couple of cuts to add left to be done), but then some feedback would be appreciated before the final version.
Click to expand...