As is usual with videos from the Nostalgia Critic's network, the original, reviewer-centric content is stupid and painfully unfunny, but if you can tolerate or mute those bits, here's a fairly interesting look at the 1985 Indy knockoff King Solomon's Mines with Richard Burton.

Gaith said:
As is usual with videos from the Nostalgia Critic's network, the original, reviewer-centric content is stupid and painfully unfunny, but if you can tolerate or mute those bits, here's a fairly interesting look at the 1985 Indy knockoff King Solomon's Mines with Richard Burton.
Click to expand...

Burton? Was he in that? Never made it that far into the movie...or did you mean Richard Chamberlain?

A piece of Indy art from the Hero Complex Gallery: 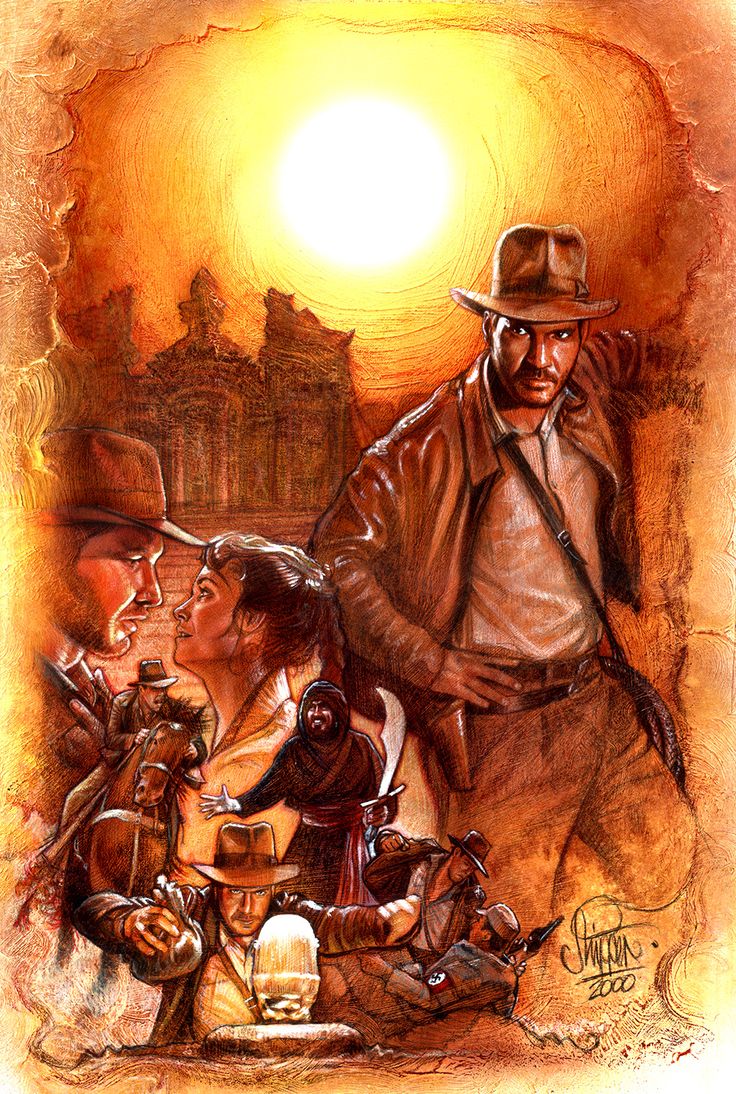 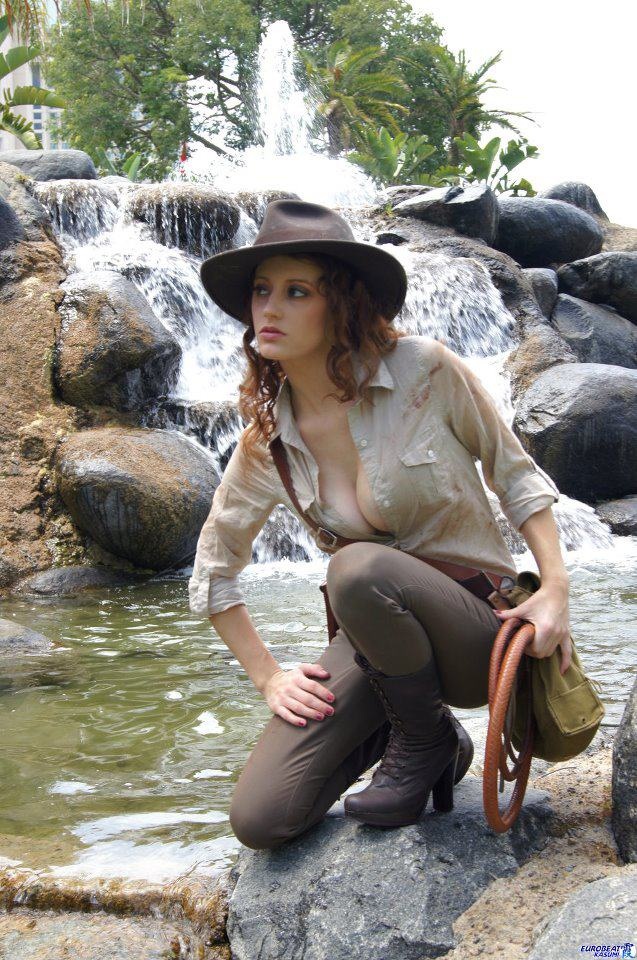 Nice! Thought I recognized Paul Shipper's work. If I remember right, he actually studied with Drew Struzan at one point. Here are a couple more of his from theraider.net: 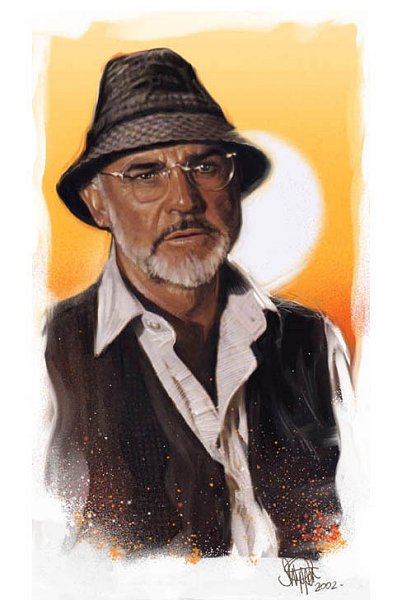 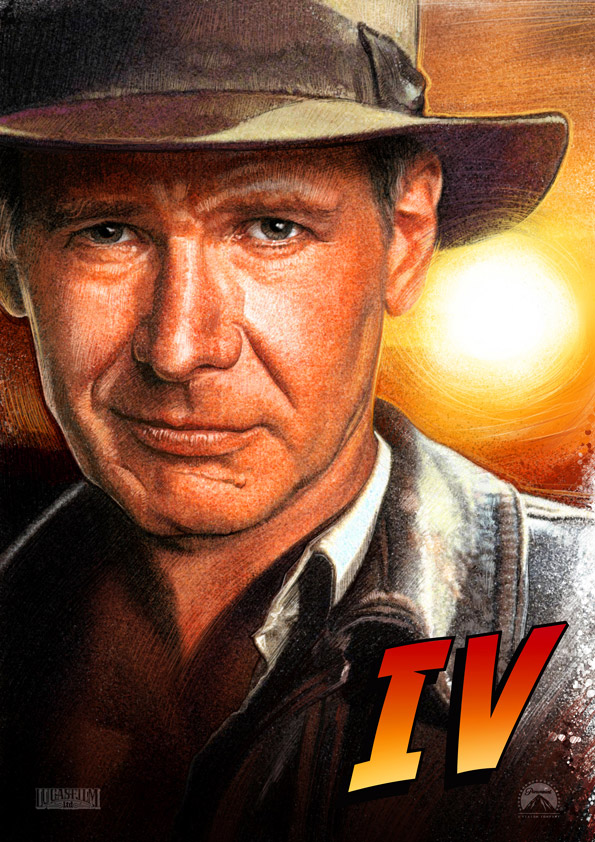 Oh, and I missed the second photo the first time I saw your post, but, um, wow.

Mrs. Heb and I watched the Mythbusters Indiana Jones special tonight. They've taken on some of the classic stunts before -- most notably the awning fall from ToD and the jousting with a flagpole from LC -- but for this one, they focused on ROTLA, including the booby traps from the beginning and the whip swing.

Fun stuff, and it included a demonstration of how to make a whip by Adam Savage (who has made several in the past) and whip technique by Anthony DeLongis (who coached HF for KOTCS -- his technique is somewhat different from HF's original whip master, which is why Indy looks different using the whip in KOTCS).

I know Mythbusters isn't for everyone -- it took me a while to warm up to it, though I have been a fan for a while now -- but I think this one would be a fun one to check out for any Indy fan. Even the fact that they called the whip swing Indy's "flight to freedom" (when he swung across successfully to get to the idol) and kept referring to the temple where the idol is located as "Mayan" (when it's in Peru, not Mesoamerica, and the idol is based on an Aztec one) didn't diminish it too much for this ex-archaeology major...

As much as I like Chris Pratt (and as much as I think they could easily make a better movie than Skull...) there are only two things that could get me excited with it:
- A damn awesome trailer
- Harrison Ford involved in the movie somehow (opening scene for example) or maybe even a cameo in the movie with him playing another role than Indy. I just want Harrison Ford connected somehow with a new Indy movie.

Of course I'll be even more happy if Anthony Ingruber was in talk for the role. But he's not known and I guess Disney and Lucasfilm wants someone who is at the same time capable of doing the job and with a name that can bring a younger audience in theater.
M

I'll never understand why anyone would want someone playing Han Solo or Indiana Jones just doing an impression of Ford. I think Pratt would be a great choice, but if I were him I wouldn't do it. It's a no win situation for him just when his career is breaking out. If he makes it his own, some people will complain that he's not enough like Harrison Ford. If he plays it close to Ford, people will complain he's bringing nothing new to it.

Moe_Syzlak said:
I'll never understand why anyone would want someone playing Han Solo or Indiana Jones just doing an impression of Ford. I think Pratt would be a great choice, but if I were him I wouldn't do it. It's a no win situation for him just when his career is breaking out. If he makes it his own, some people will complain that he's not enough like Harrison Ford. If he plays it close to Ford, people will complain he's bringing nothing new to it.
Click to expand...

As much as I understand your argument I just think Anthony Ingruber is too good as "making Harrison Ford" for me to not want to see what it could look like in a movie.
Sure I would not want him to make a parody of Ford, but damn, the guy is good (at least at doing this. Not sure of his actor's skill to bring emotions on screen).
Pratt is now the obvious choice for Disney and Lucasfilm and yes, I agree that if he gets the role it will be tricky for him. But it will be the same for any actor who will dare to accept the role. That's why I think an unkown who can look and act like Harrison Ford would be an interesting choice. But thinking twice, maybe keep Anthony Ingruber for a Han Solo movie: the visual match will more benefit the Star Wars universe than the Indy franchise.
(Side note: Ingruber is already playing a young version of Harrison Ford's character in his upcoming movie: The Age of Adaline. So he is on the radar somehow)

I was hoping they weren't going to reboot, but I guess why not?

I love adventure movies, and the Indy franchise has got that genre down pat. Every adventure film since has just paled in comparison. Why should a franchise that is over have a monopoly on a genre?

Bring on the soft reboot. No origin story, no pretension that this fits into the continuity of the last four films. New actor, back to the 1930s setting.

Chris Pratt is not Harrison Ford, but that doesn't mean he's not as good. He's just different. Bond has thrived on variation in the casting of their main star. So they should go with Pratt, because he's a fantastic actor. As long as they don't make him act like he's Ford, we should have a great new Indy.

Well, Pratt is playing an Alan Grant-ish part in Jurassic World, and Ford was offered Alan Grant, so... ;-)

HF will always be Indy to me. Others may play him, but HF has, as he himself has said, made Indy his life's work. Plus all the humanitarian stuff he does, including literally rescuing people who are stranded, makes him seem that much more like Indy. But I have to accept the possibility, indeed likelihood, that they will try. So...

I like Pratt as Star Lord. A lot, in fact, and I love the riff they did on the opening of Raiders in the opening of GOTG. But I have a tough time seeing him as Indy (the very good Photoshop Gaith posted notwithstanding). An adventurer? Yes, definitely. A Rick O'Connell type? Oh yeah. But Indy? I'm just not sure he can bring the full range of being very, very book smart and also good on his feet and in a fight.

I'm probably one of Ingruber's most vocal supporters on here, if not the most, and I have long thought that he would be a very interesting (and cheap, at least as an experiment) choice, particularly if he had the chance to talk and study with HF (which he has now had for the film TMBTM mentioned). I don't know what he is like in extended sequences, but he does have fantastic range physically and vocally; if it could be harnessed right, then he could be a worthy successor to (at least) River Phoenix and Sean Patrick Flanery (not counting Corey Carrier here, since his "Kid Indy" was a little too different and underdeveloped to compare). I do plan to see Age of Adaline, almost solely for Ingruber and HF, since (as easy as she is on the eyes) I usually can't stand Blake Lively.

Having said all that, there are two known actors I have considered as possible Indys. A number of years ago, before KOTCS, when it looked like they might try to recast, I realized that Dennis Quaid could probably do it. He has always had many HF-like qualities to his acting, and he has aged to look increasingly like him. But at this point, he too is probably older than they would want for a reboot.

The other actor is someone who is much younger -- not quite as young as HF was in ROTLA, but not much older, and he looks younger than he is, as HF always has. He has a similar voice, is in great shape, is incredibly smart in real life and can "play smart" on camera, and he also looks like he can handle himself in a fight. He also currently plays a guy who will stop at nothing once he has his eyes on a prize, and he's even got the Jewish background and features HF does (though in his case, both his parents are Jewish, not just one). He doesn't have a broken nose or a scar, but those are easily added, as the scar on Flanery proved.

Who is he? Gabriel Macht. I honestly never, ever thought of him as Indy before, but something about seeing him on Suits last season and (maybe more importantly) reading an interview with him where he talked in part about how he prepares for a role made me realize that he builds lots of subtle layers into his performances, much like HF does. And in this photo, at least, he even has a very young HF vibe:

Interesting new interview with Anthony Ingruber. (at about 30 minutes in)

Thanks for sharing the interview, TMBTM! I've listened to an audio interview with him before, but this is the first time I've had a chance to see him and hear him for an extended period (mostly) out of character. Seems like a very down-to-earth and genuinely grateful guy, which syncs up with his FB posts. I hope he does get to be on the red carpet with HF in April, and I would have loved to have seen that photo of the two of them close up.

Yes to a soft reboot, no to Chris Pratt (even though I like him).

Emphasis on the "soft" part of reboot. Echoing what I just said about Ghostbusters in another thread, Raiders of the Lost Ark is as near to perfect as any movie ever made, and I don't want some studio now announcing that the events of this movie never happened to that character.

Indy shouldn't see too many amazing things in his life before the events of Raiders, because it's unlikely he would still be so skeptical by that point if he did. Still, if the movie is set in the 1930's (or 1920's) before Raiders and it's entertaining overall, I can live without that particular character point lining up perfectly.

I like Pratt, but I tire of studios picking the currently most popular actor whether or not they're right for the role. Warner Bros. lucked out when they hired comedy actor Michael Keaton to play tortured soul Bruce Wayne, but it's the same mentality that led them to recast Harvey Dent a couple of films later, and to woefully miscast George Clooney and Alicia Silverstone.

All that being said, Pratt reminds me a lot more of Harrison Ford than some of the other names and roles I mentioned. I'll be willing to keep an open mind.

Just stumbled across this clever bit of digital art by an artist who goes by the name "Rabbittooth." It's an homage to Norman Rockwell's famous painting of a cop and a young runaway at a diner: 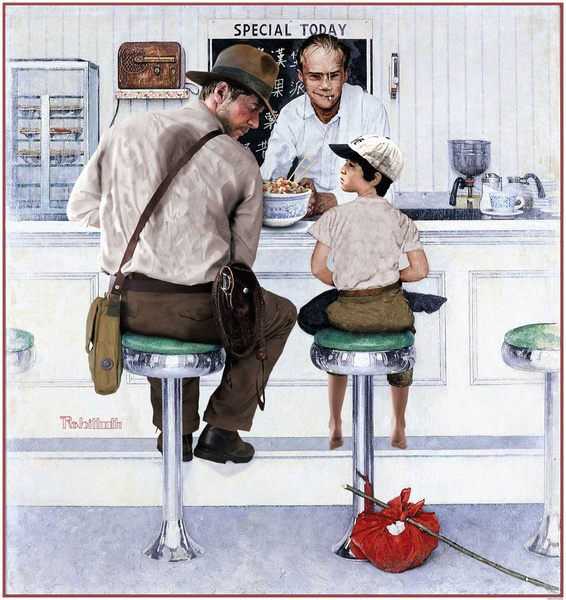 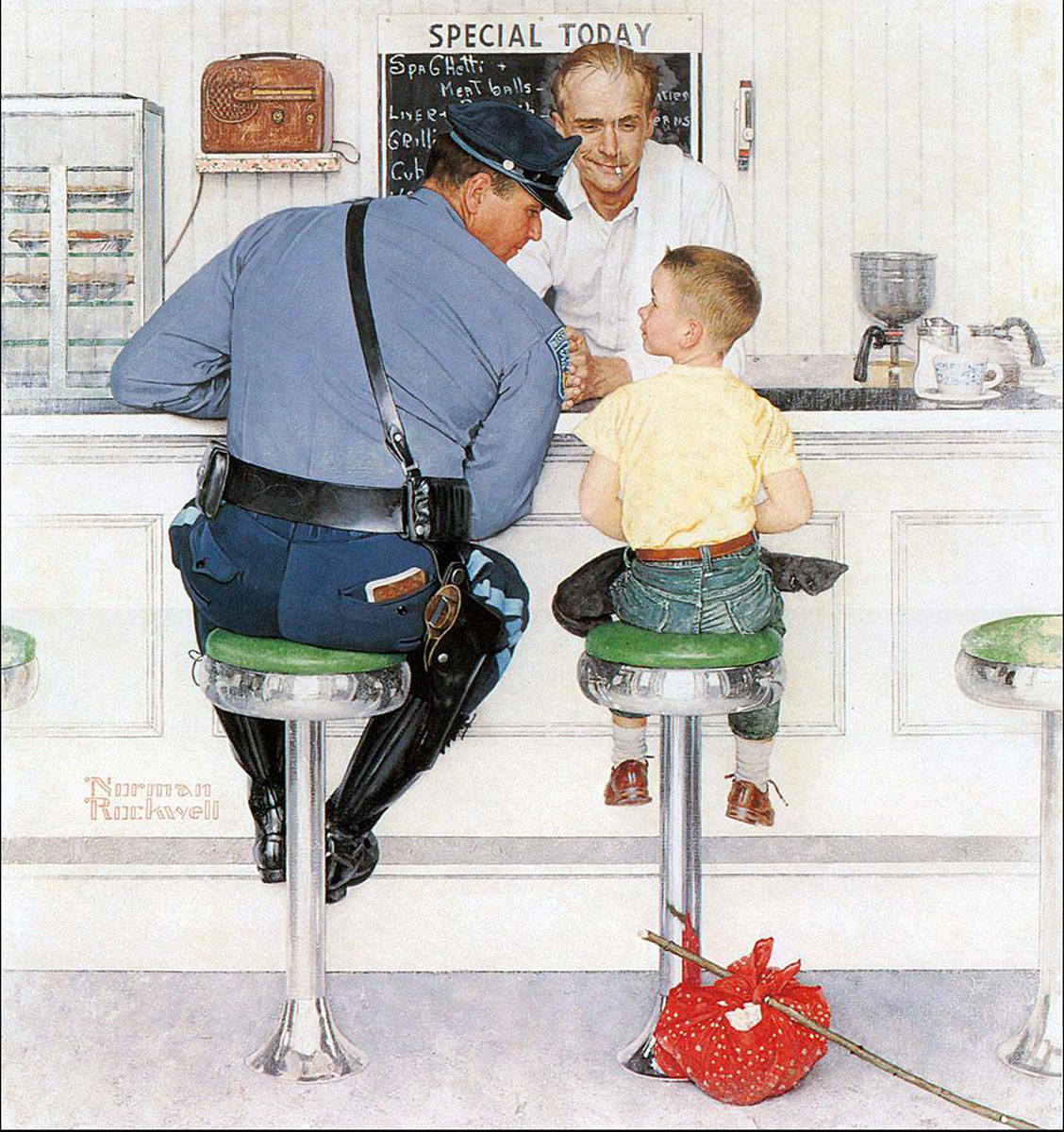 H/T to Indymag for the original link. He has also done a number of other works that feature Indy (more or less), including a Star Trek mashup featuring "Indiana Bones."