Halloween 5 - The Shape of Rage - A Last Survivor Fanedit 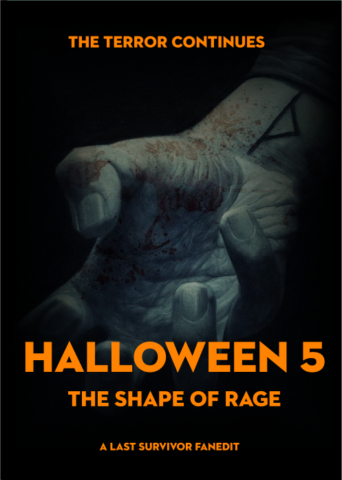 Halloween 5 was made just a year after the impressive Halloween 4, and the fact that the script was unfinished before filming began is just one contributing factor to the feeling that the whole film feels rushed and somewhat underdeveloped. Having said that, there are some good scenes in the film, particularly involving Dr Loomis and Jamie Lloyd, and it boasts a finale well worth sticking around for. This fanedit will attempt to streamline, and refocus the film to be about the three central characters - Loomis, Myers and Jamie - redundant scenes and characters will be heavily trimmed or totally excised.

I've always loved Halloween 5... well, to a degree. It's frustrated me that the pacing of the film, not to mention some annoying characters (comedy cops anyone?), does prevent it from reaching its full potential, and whilst I don't believe this edit can completely turn the film around, I do hope it's more enjoyable and much tighter. Happy Halloween!


- Recap of Halloween 4 cut
- Michael's escape from the well cut and his meeting with the old man at the shack... film now starts at the Children's clinic
- Cut jamie's scenes at the clinic which show her having a fit as she senses Michael killing the old man
- Trimmed some of Tina's annoying antics as she visits Jamie at the clinic, with Max and Rachel.
- Cut Rachel's line "Then why do I feel guilty", as she is leaving the clinic with Dr Loomis
- Cut Tina and Rachel talking whilst Michael looks on from the bushes
- Removed comedy noises as cops come out of Rachel's house
- Trimmed scene with Billy, Dr Loomis and Jamie so that scene now starts as if Loomis has just entered the room with only Jamie there
- cut down scene where Tina arrives at Rachel's house (intercut another Loomis' chat with Jamie with the scene)
- cut scene where Jamie has another episode as she senses Michael is near
- cut dialogue scene between Tina and Sam and Mikey's arrival
- cut Jamie seeing Michael outside the clinic and then her running to the basement
- cut Michael watching Tina and Sam as they meet Mikey
- Trim scene with Mikey, Tina, Sam and Spitz as they make plans for Tower Farm party
- Moved scene with Billy giving flowers to Jamie for pacing reasons
- slightly trimmed scene where Tina is getting ready and then goes outside to be picked up by who she thinks is Mikey
- Trimmed shot of man in black as Tina and Mikey drive off (he's still in the scene though)
- Cut man in black, after Jamie makes decision to follow Tina to Tower Farm
- Tower Farm sequence heavily edited, particulalry the "barn" sequence to tighten the pacing and move the story forward quicker.
- Spitz is no longer seen impersonating Michael Myers
- Trimmed the cops comedic dialogue
- As Tina is dying, removed one of her "go Jamie" lines
- Trimmed scene where one of the cops can hear one of his colleague being murdered on the walkie talkie
- When one of the cops shoots Michael, edited it so that he shoots quicker
- Removed Jamie's line "Please God", when she is stuck in the laundry chute
- Cut scene of Michael;
Special Features:

Congratulations on completing this. I'll have to check it out.

Neglify said:
Congratulations on completing this. I'll have to check it out.
Click to expand...

Thanks Neg... hope you enjoy it

This was an excellent fanfix by LastSurvivor. I finally enjoyed the awesome Halloween V finale without it feeling like a chore to sit through! As usual, LS provided me with an informative and thought-provoking Audio Commentary. Highly recommended.

Thank you LastSurvivor for your Hard work on another great Halloween fanedit! Hoping to view this baby soon!! I literally cannot wait to see this one!!

Biting my nails waiting on this!!!

Many thanks to @Ryantology for your kind review! Glad you enjoyed it - although, yes, you're totally right about the continuity error with Spitz... I just felt it was a compromise worth making at the time... in hindsight, maybe not such a good idea
R