nOmArch said:
although im really waiting for 'The Invisibles' not that its that likely to be picked up
Click to expand...

Uuh! yes. Totally with you. Maybe they deserve a tv show as well. I?m with you on most of the DC Vertigo stuff back then. They had some remarkable one-shots that would be suitable for movies as well. anybody remember ?The eaters??

or what about a real Hellblazer movie??? Is it too much to ask to take an englishman for the main part and not an american? and please let him wear a trenchcoat and let him smoke silk cut (and don?t let him stop smoking cos he learned his lesson :-? stupid keanu movie that!)
V

indeed, in fact that remins me that i really need to DL Jorge's Hellblazer edit,

apparently Grant did write some scripts for an Invisibles TV show circa 95 - 98 for broadcast on BBC. shame it never got anywhere

btw Stardust is worth the price of admission just for Robert Deniros character alone. did i mention you should go see it? you really should you know.
M

I've now read the first 14 issues of Y - The Last Man. Now, unlike you may think from the title, this comic doesn't deal with a world where only one human survives. But instead in the first issue every single creature with a dick dies. Aside from the main character and his pet monkey. The artwork is magnifico, and the writing is highly original despite the relatively cliched set-up. The whole comic is just incredibly intriguing, and the dialogue is some of the best I've ever read in a GN.
V 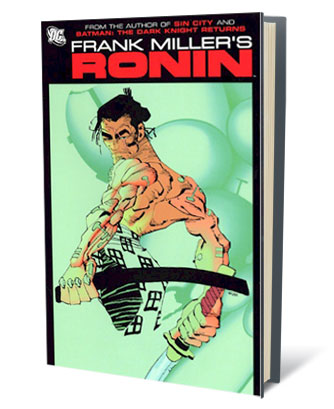 great comic book. frank did some great work there.

my favorite will always be this one:

my favorite sin city episode is "that yellow bastard"..... perfect use of light and shadow.

when i saw sin city the movie for the first time i said to my wife that if sheÃâÃÂ´ll ever leave me and runs away with clive Owen i would have to understand the decision...

lol. you donÃâÃÂ´t like the great miller batman? unbelievable.

as for moving pictures: i guess you are more into the adam west batman than into this weird new age batman stuff...?
V

I never really got into comic books as a youth, but after recently seeing some Frank Miller stuff, I am very interested. I just got a copy of the Batman stuff, and I'm looking to grab the Sin City books also. I'll have to check out Ronin.

...have you guys seen the Batman Censecution fanedit project? you should check it out when its done. my little short might interest you

ThrowgnCpr said:
I never really got into comic books as a youth, but after recently seeing some Frank Miller stuff, I am very interested. I just got a copy of the Batman stuff, and I'm looking to grab the Sin City books also. I'll have to check out Ronin.
Click to expand...

that is a good idea and you are a wise man.

voodl: havent seen the flick yet but will. but tired of batman? never ever! heÃâÃÂ´s the one! like neo only cooler and judging from my point of view it seems like he was always there. which is good. the only superman comic book i have is this paperback which is called ÃâÃÂ´the death of supermanÃâÃÂ´ (ÃâÃÂ´...for that was the day that a superman diedÃâÃÂ´ oh and return of the dark knight where he gets the beating of his lifetime!- hehehe)

dont get me wrong heinrich.....I just thought that guy like you will choose something unconventional for favorite comic book....batman story is older than Grimm's Fairy Tales.....

donÃâÃÂ´t get me wrong i like original and i even like grimmÃâÃÂ´s fairy tales but batman is better than both!

I was an avid comic book collector back in my youth and havent been too interested for many years. I'd buy a book here or there but nothing you could even call a real hobby. Untill the other day... I want to my local comic store to grab one of the Amazing Spidermans that feature Obama on the cover and picked up a few others to read.

I enjoyed it and dug out my box-o-comics from years ago and decided to start filling in the gaps on issues I was missing etc and its been an experience I haven't felt in a long time.

It's probably just a passing phase but I have been really into reading comics again! I spent $20 on ebay and $50 at the shop yesterday on Predator and Batman books and am probably going to swing by the shop on my way home from work again tonight
J

i've been a frank miller fanboy since high school (so like... 10 years, yikes!) and i've really liked ronin and his daredevil stuff (among the obvious like sin city and TDK).

i'm more of a trade comic reader. i like the stories and the medium, but don't care about collecting.

I find that I am much more into film adaptations and spinoffs/alternate universe stories than I am about Superheroes and traditional comics. I have lots of aliens, predator, terminator, robocop comics along with random issues of batman, spawn, xmen all from the late 80's early 90's. Thankfully no one is really reading that shit anymore and most of what I need can be found on the cheap.

I intended to spend $15 and I dropped $50 at the comic shop and another $30 on ebay last night. I dont know whats gotten into me but its starting to tax my wallet. I feel like a 13 year old who cant responsibly manage his $ anymore.
J

that's been me lately with screamo/post-hardcore CDs, too!

joebshmoe said:
i've been a frank miller fanboy since high school (so like... 10 years, yikes!) and i've really liked ronin and his daredevil stuff (among the obvious like sin city and TDK).

i'm more of a trade comic reader. i like the stories and the medium, but don't care about collecting.
Click to expand...

I used to buy comics every wednesday.. filled up about 6 longboxes.. And then when I quit my job and became a college student I found that I couldn't afford it anymore, so now I'm more of a trade person. It's nice being caught up with what's going on in the DC and Marvel universes, but it's simply not affordable any more. It's easier for me to just order the trade on Amazon when I can afford it.
You must log in or register to reply here.
Share:
Facebook Twitter Reddit Pinterest Tumblr WhatsApp Email Share Link
Top Bottom