Mr. Pancakes (I hope it's ok if I call you that. Because I really wanted to!)

Thanks for watching my edit and your kind words. I'm glad you enjoyed the edit, especially since you weren't able to get into the miniseries.

I didn't cut the Reverend Mother scene at the beginning short, but you are right that I cut the reference you mentioned. The Reverend Mother that tells him this is actually the Fremen one. She appears to him in a dream and it's one of my least favorite scenes in the entire mini-series. I sacrificed that moment to get rid of a terrible scene.

There actually aren't any other moments to add in when Paul is being accepted by the Fremen. I think because I trimmed a lot of other moments out it feels like that moves quickly. I was hoping the montage of him learning, and then participating would help. I'd like to note that Paul doesn't actually lead until toward the end of the film, but he becomes trusted by Stil and the rest of the Fremen, and they let him advise.

There is actually a voice over from Jessica over the ending that I cut. This does explain the Paul/Irulan situation, but it also deflates the ending and makes it about Jessica and Irulan instead of Paul. Since Irulan says exactly what ends up happening before the fight with Feyd, I had hoped it would be clear enough. I did have some concern about the clarity of that plot point, but at the end of the day I'm happy with the decision I made.

I do not mean to argue with any of your feedback, which is very valid. I just like to point out why I did the things I did. All of the criticisms you had were very specific choices I had to make. Such is the struggle of removing almost two hours out of a story and hoping it all makes sense!

I'm considering Children of Dune, but I honestly don't have as much experience with that one, I've only seen it twice. It'll take a few more viewings to see if it's something I'd like to work on.
E

All of that makes perfect sense, and it's pretty much what I thought while watching the edit - the material just isn't there in the source (or, if it is, said material sucks/doesn't fit the tone of the edit). None of these are deal-breaking by any means - everything absolutely makes sense.

And I just want to say again that this is by far the best Dune edit (miniseries or Lynch) that I've ever seen. Something about the scope aspect ratio and your toning down of the colors (and bad acting) helps to diminish the problems I've always had with the cheap sets and stage-like lighting. I've finally got a version I can force my brother to sit through with a high degree of confidence that he'll enjoy it (he saw a bit of the Lynch version on TV and now refuses to give the book or miniseries a try), and I have you to thank for that!

The only real problem with doing Children that I can see is the fact that the second book, Dune Messiah, is covered in the first episode, and the actual Children of Dune novel is the other two episodes. I'm not sure how well you could condense that down into one coherent film without reducing Messiah to 15-30 minutes. I really wish there was a way to stretch that one out to 90 minutes at least, to make Messiah its own film, but I don't think the Children miniseries supports it.

The only way of making that work is making Dune Messiah take less time, like more of a prologue. But that's a discussion for another thread.
E

I did want to point out a couple technical issues I noticed:

At 01:03:53, when it cuts to the shot of the worm crawling back into the sand, there's a jump cut - it looks like a couple frames of a different shot of the worm were left in accidentally before the shot you used appears.

There was also a compression issue (I assume that's what it was) somewhere, but I can't remember where. I'll come back to that one after I watch it again (I'm going to try to get my brother to watch it with me later tonight).

Other than that (and the John Hurt thing), I didn't notice any technical problems.

Oh, and I posted my review to IFDb just now, too!

I'll take a look at those loose frames when I get a chance. Thanks so much for your review!
E

I know we decided this doesn't really belong in this thread, but I just watched episode 1 of Children of Dune last night, and realized A) I'd actually never seen it before (and it was pretty damn good), and B) it's 90 minutes long!

I think you could absolutely add opening credits in the same style as your Dune edit, reframe everything to 2.35:1, and trim a couple bits here and there (most of Paul's second vision in the "cabinet meeting," and roll credits when the sandworm pops out of the desert in front of Paul, removing the very last bit of narration - I'd like to add more damage to Paul's eyes in the last half, but I don't know how feasible that is), and you've got a lean, mean, hour-and-a-half Dune Messiah movie edit - then you could focus on trimming the 3 hours of Children of Dune down to a ~2 hour movie to cap off the trilogy.

Hell, other than the reframing, Dune Messiah would require such minor work (particularly if you want to keep it feature-length) that I'd be willing to tackle it myself if you were interested in doing your version of Children from the last two episodes. It would be a short #2 in the trilogy, but the book is about half the length of the first one anyway, so it's kind of fitting, really.

Go ahead and give Messiah s shot if you'd like! I'll give Children a go after I finish Man of Steel.
E

Sounds great! I'll see if I can get hold of the French Blu-Ray (or a good copy of it). The US DVD will have to be a source to cover up the burnt-in French subs on the BR, too.

Or crop them out. You should probably make an in the works thread or restrict this to PM though.
E

Of course. Once I get the source I need and start actually working on it I'll make an in-the-works thread for it. I'm done derailing this thread now, promise!

No worries! Let me know if you need any consulting.
A

I am a huge Dune fan. I love the Lynch version despite all its flaws, played through the Dune PC games of the 90s (Dune 1, 2, 2000 and Emperor), but I could never bring myself to sit through the miniseries. The bad acting, the cheap sets, the tempo just put me off every time I gave it a shot. But this edit changed that for me.
From early on I was drawn into the film and with much of the bad acting removed, this edit moved briskly and was engaging and fun. Brain Tyler's score certainly helped as well.
This is as close to a good Dune movie we'll get anytime soon.

This edit is the reason I'm now getting the Children of Dune miniseries, though I am tempted to not watch them until I've seen your edit of them first and then watching the original series like one would watch an extended edit or deleted scenes.

Thank you very much for your efforts, this is a fantastic fan edit that dramatically improves upon the original!

I'm glad you enjoyed it! Would you mind posting this review on fanedit.org/ifdb just so it gets officially recorded? When you have a chance of course.
T

Hi Spence and thanks for this great edit! I also noticed the opening with John Hurt ;-) If you are going to look into the opening again, could you also center the opening texts over Arrakis? Looks a little funny now, like thev'e moved to the left. For instance, the first text 'Universal Pictures Presents' has the letter U over the left horizon, while the last letter s is clearly inside the globe of Arrakis. The same applies for the rest of the texts. Hope that my description makes sense...

Just so everyone is aware, I'm going to rework the opening credits of this soon and release a V2. No other changes will be made.

spence said:
Just so everyone is aware, I'm going to rework the opening credits of this soon and release a V2. No other changes will be made.

Made a blu-ray cover for this edit on my shelf. The font on the back was really tricky, nothing worked great but I really love the image underneath so I made it work well enough for me, anyway. Thought I'd post it here in case anyone else wanted to download it: 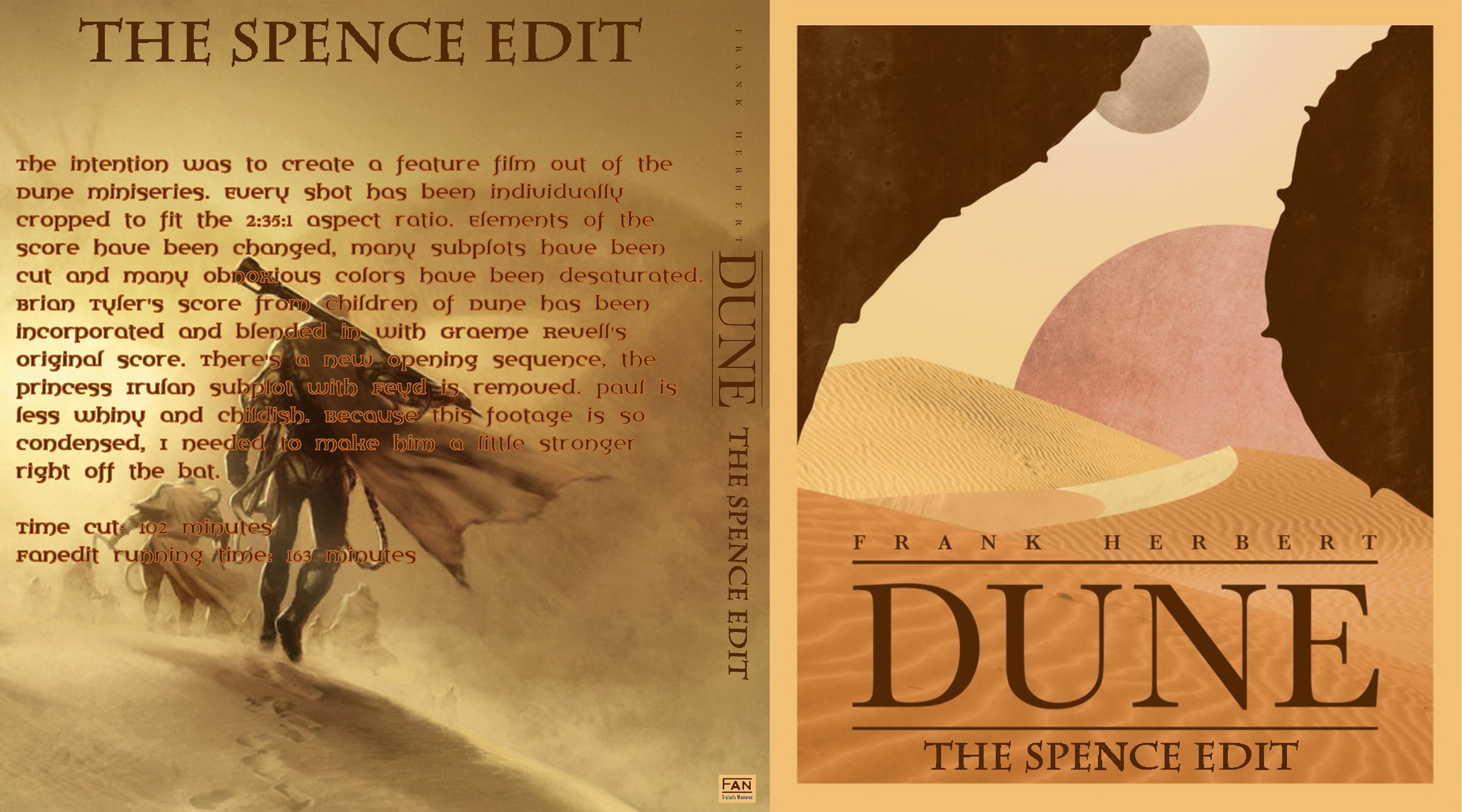 based on art by deviantart users closerInternal and FanaticPassion
P

Thanks! Hopefully it looks ok on my large 4k tv because of the the small file size.

pinballman said:
Thanks! Hopefully it looks ok on my large 4k tv because of the the small file size.
Click to expand...

May I please get a pm with a link to this. One of my all time favorites?