tagline: Put your leg down

-Cut "Bad to the Bone". Almost a dead giveaway that Arnie is good this time. Without it, the T-800 still seems dangerous, at least until he tells John to duck.

-Cut Sarah getting force fed her medication. A pacing cut if anything.

-Trimmed Sarah's first nightmare. Dissolve to white just as she exits the corridor so that we don't actually see the playground. I feel that should be reserved for the second nightmare. Description still afterwards.

-Cut T-1000 getting another police car. He drove to the mall in one, he doesn't need to swipe another one.

-Cut "Why?" exchange. John now realizes the pointlessness of arguing with a robot, especially one that will do everything you say.

-Cut Raging Waters. Focus stays on the Conners, as it should.

-Cut Terminator staying under the speed limit. John gave him an order to speed up, shouldn't he speed up?

Your intention for this fanedit: To make a hybrid of the heavily cut theatrical version and the bloated Special Edition, as well as cut some of the badly placed humor to make T2 closer to the original Terminator film.

Additional Comment: DVD on the way with some extras.
The .mp4 works on PS3. Hasn't been tested on 360 or any other systems.

Time needed for the edition: A week.

i knocked up a quick cover for this 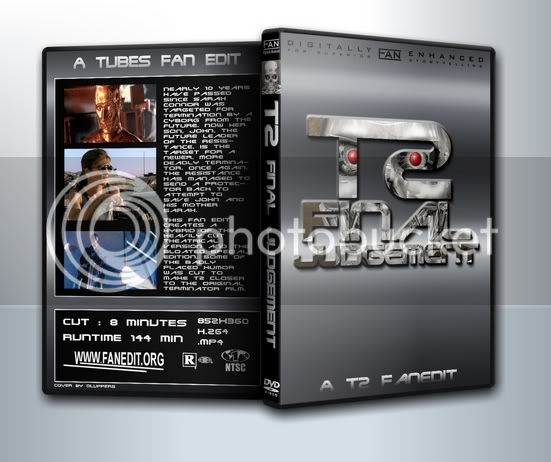 I have a question. If you remove "Bad to the Bone", how do you explain that Arnie got his shotgun (and the cool Harley Davidson)?

There's really no need to explain them.

The "Terminator arrives and steals what it needs" routine is self-explanatory.
J

Is a DVD version forthcoming?

So am I to understand you cut the scene right after the biker tosses his keys to Terminator? I was thinking you just took the music out of the scene...

That would be too bad, because my favorite moment in the movie is Terminator's quick grab of the shotgun from the bar owner's hands.

yeah, its a good scene, but the music is teh suck. I am probably going to take a stab at a light edit of T2 sometime in the not-so-distant future. I'm going to try to rescore that scene with something that isnt completely ridiculous

Yes, that whole scene is great. Real shame to lose it.

If you do an edit, may I suggest using some of Brad Fiedel's mechanical "heartbeat" stuff? I bet that would work nicely.

How come there are no reviews or votes for this fan edit?

Its been around for a long time already ....

Does this edit also cut the cheesy stuff such as "i need a vacation" or the "thumbs up" moment?

jelio said:
How come there are no reviews or votes for this fan edit?

Its been around for a long time already ....

Does this edit also cut the cheesy stuff such as "i need a vacation" or the "thumbs up" moment?

Both moments are still in it. I could never figure out how to cut "I need a vacation" out seamlessly. The Thumbs Up fits in context with the end, as the Terminator fully evolved beyond his programming to adopt human traits.

As far as why it's never reviewed, I didn't promote it very well and described it as more of an experiment with other editing techniques than a full fledged project. People probably didn't think it was worth their time or bandwidth.

Hmm thats too bad that it was presented as experimental only,

you must realize that even now you come across as still not promoting your work, oh well.

I personally feel that there isnt a T2 fanedit out there yet that meets my own vision.
Specifically removing just the cheesy moments and leaving everything else as it was.

jelio said:
I personally feel that there isnt a T2 fanedit out there yet that meets my own vision.
Specifically removing just the cheesy moments and leaving everything else as it was.
Click to expand...

Maybe you should make one then

Maybe i will when my skills improve