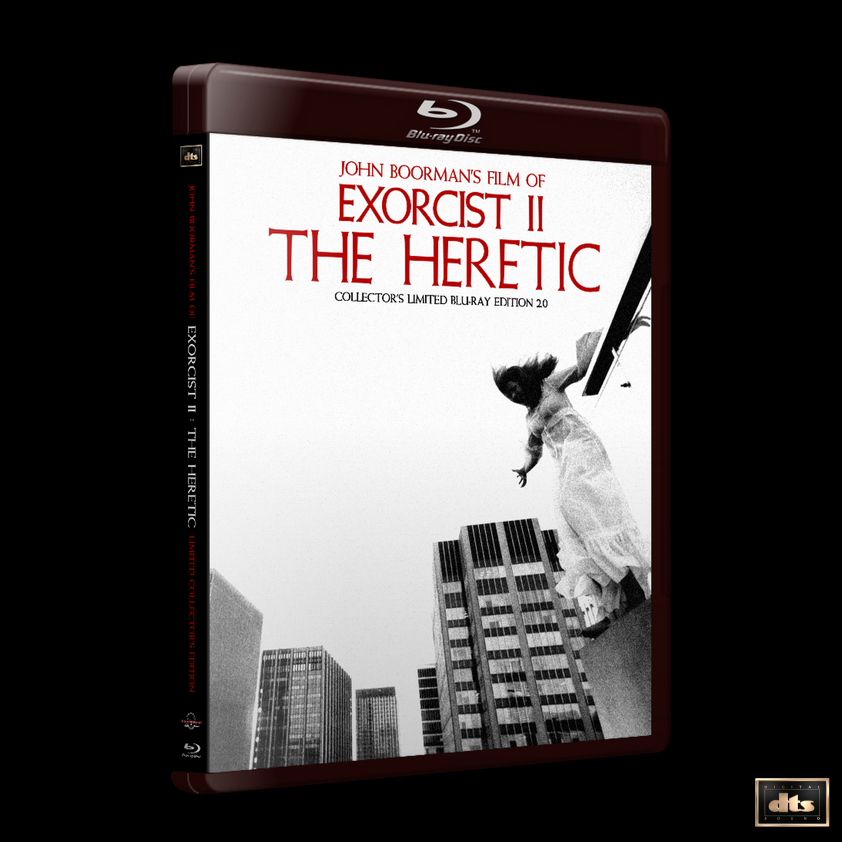 THEATRICAL CUT [HD 1080p][/FONT]
[FONT=&amp]This version runs 15 minutes shorter than the original director's cut. It was recut by John Boorman the day after the premiere of the film, and was released in theaters worldwide, then on VHS. This was the only version of The Heretic available for more than 15 years. It then completely vanished when the film was released in a different cut, first on the VHS re-edition in 1993, then on DVD in 2002. Although this rare theatrical cut misses many scenes, it also features some additional footage exclusive to this version. Some scenes are ordered differently. It includes an added flashback scene, stock footage of Regan as the demon, extra gore, and a different ending. Some of the music and sound effects are also noticably different.
Runtime : 01:43:05
Video : AVC1 | 1920x1080 | 1.85:1 original A.R. | 23.97fps | 28.000 kb/s.
Audio 1 : English | original mono mix 1977 | LPCM 1.0 | 768 kb/s.
Audio 2 : French | original dub 1977 | LPCM 1.0 | 768 kb/s.

[FONT=&amp]"I liked the first Exorcist, but The Heretic surpasses it. Maybe Boorman failed to execute the material, but the movie still deserved much better than it got." - Martin Scorsese [/FONT][FONT=&amp]
[/FONT] 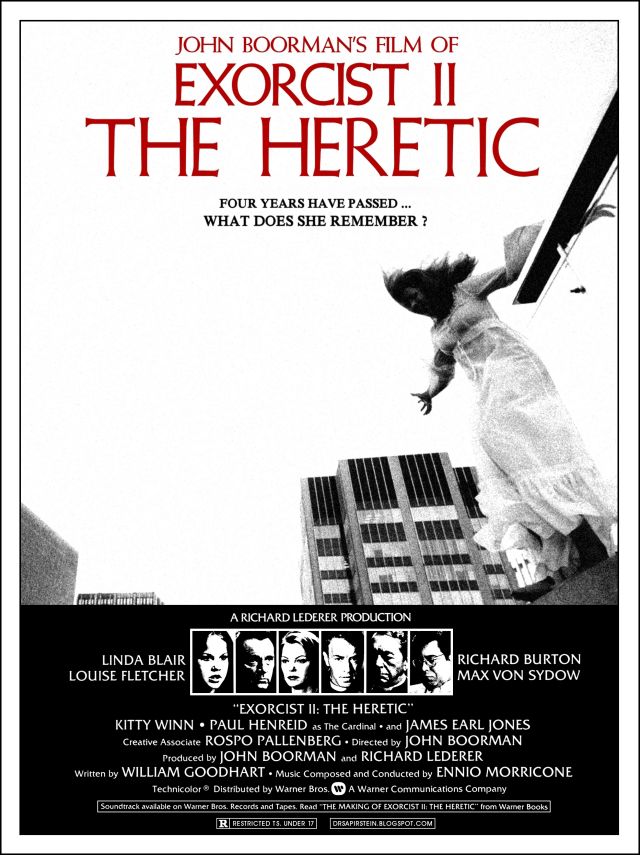 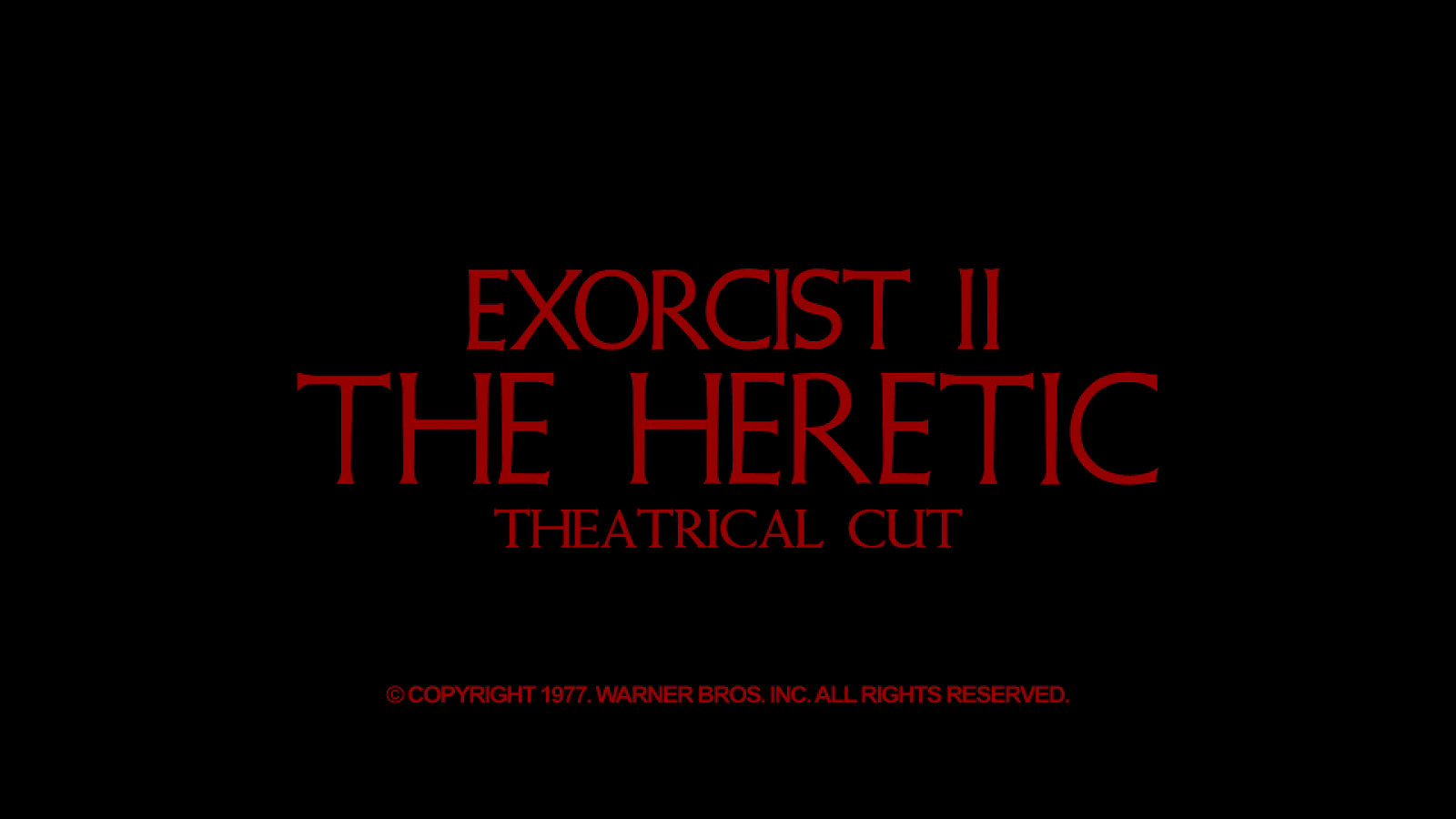 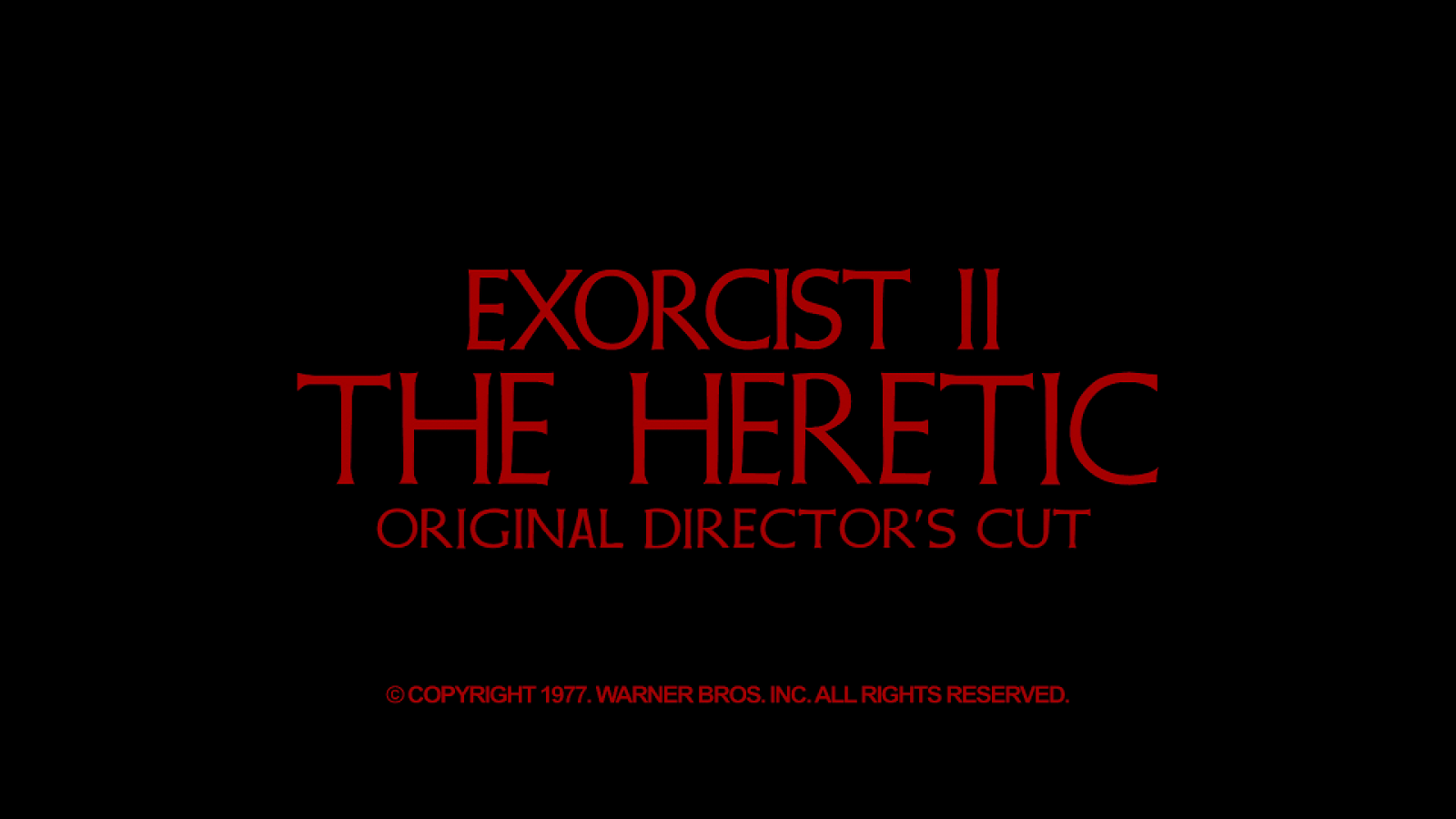 I've always liked Exorcist II. I'm excited to see the directors cut and watch it on blu-ray since it will probably never get an official blu-ray release, or at least not a very good one.
T

But be patient, I've currently been downloading for 4 days and it's not done yet. But it is a full BD-50 so I kind of expected that.
C

I can't wait to see this. I talked to the writer of a Boorman bio and he was really talking up E2.
C

Is there a good thread somewhere about burning/converting these kinds of files? I've never seen such things. Trying to be vague.

cashiers said:
Trying to be vague.
Click to expand...

Done as I have the same problem. Also have the issue bluray disc space.
http://www.fanedit.org/forums/showt...anedits-Assistance-Thread&p=219308#post219308
M

Has anyone got this on Blu-Ray?
B

I don't have a blu-ray burner, so would anyone be willing to make a copy of this for me? I would be happy to trade for it. Please PM me if you can help.
M

I'm now pretty sure it is impossible to get this on to a blu-ray disc. The standard capacity of a BD50 disc is 46.6GB and this "special edition disc" is 49GB. I've tried different brands of disc just to be sure there isn't variation but it appears nothing will take a BDMV folder of this size.
M

I didn't have the time or inclination to start remuxing and rebuilding this disc to make it standard size so found an easier fix if anyone is interested in getting this on to a blu-ray disc.

Load up the BDMV and CERTIFICATE folders to your burn list, then go into BDMV and then into STREAM and delete file 0002.m2ts from the list. This file is the photo gallery, losing it brings the total size down to a burnable level. The photos are very small and low-res anyway, and play in a little frame in the centre of the screen. The whole 20 minute segment is also accompanied by two irritating American voices yakking the whole time, don't know who they were because I couldn't listen to more than a few seconds at a time! Losing this item is no problem for me because I doubt I would ever have watched it anyway.

So with that file excluded, the disc burns fine. I watched the movie to make sure the disc structure wasn't screwed up in some way by the deletion and it played without any problem. Obviously if you select "Photo Gallery" from the menu nothing plays, it just stays on the menu.

The menu would be my main criticism of this project [apart from not making it the standard BD size of course!]. Each item is presented separately on a sort of carousel and every time you move to the next item the menu background video stops and restarts, meaning it is impossible to quickly skip through items. Every step means a wait of a few seconds while the menu reloads, it is infuriating.

The movie is the main thing though, and it looks fine. I've previously seen the restoration of The Exorcist which was ok but a bit blocky and only 720p. Exorcist II doesn't have those issues. The movie itself is not good of course, but no amount of restoration is going to change that! ;-)

American voices for the win.
T

Amazing work Dr Sapirstein. Thank you. I especially liked the Billy Friedkin, "the guys responsible for this movie are in this room!" clip.
N

I realize this is an old thread - but I'm very curious about this project. From everything I've seen, this is near-Industry level work, complete with a Bluray menu, numerous audio-video options and bonus materials.

But I wonder - how does the presence of bonus materials here fit the 'own the source' policy exactly? I mean, these elements are not part of the Preservation edit itself - and I assume they haven't been re-edited in any way, shape or form, though I assume they were altered. Also, what sources did Dr. Sapirstein use in the (re)construction of the two cuts? Especially, as the Director's Cut "never released on VHS, LD or DVD or BD"? Are there extensive notes available detailing the differences?
You must log in or register to reply here.
Share:
Facebook Twitter Reddit Pinterest Tumblr WhatsApp Email Share Link
Top Bottom