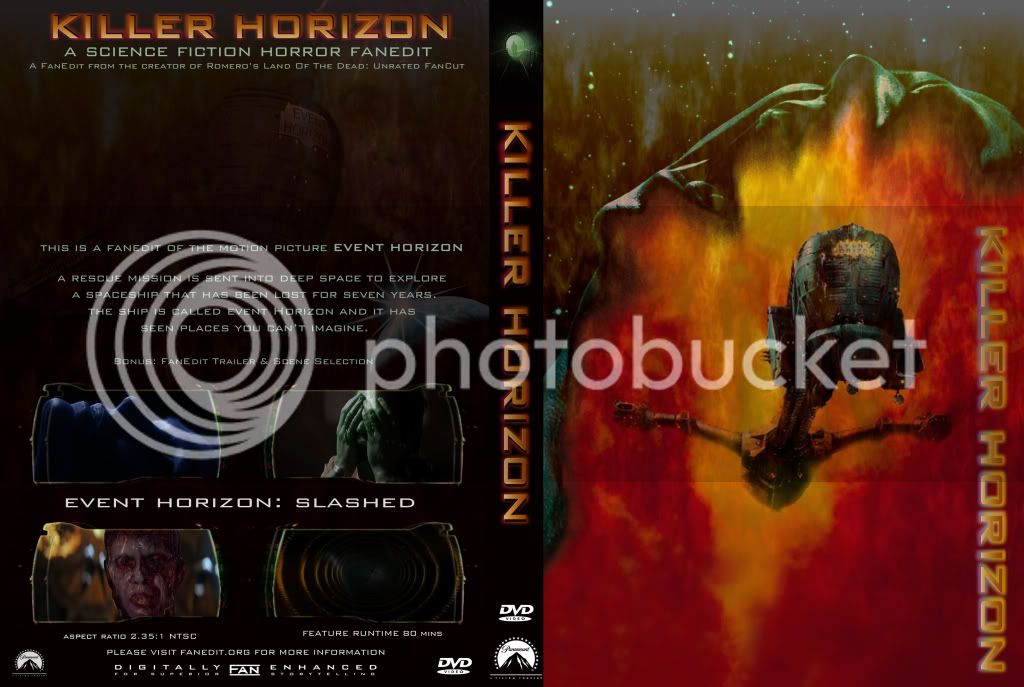 What is it about? This turns Event Horizon from a clichÃÆÃÂ©d horror flick into a twisted depiction of possession and evil.

Tagline - Human Will Be Forgot. Their History Dust.

*Note: To make sure that the Single Layer DVD is of the best quality, most extra features were removed. A short called "Slashed", which has scenes cut from Event Horizon, is available to download as a separate avi. and a few other extra features.

Conceptual Improvements/Advancements Of Edit Over Original

The idea is to tell a bleak and bloody science fiction horror story using Event Horizon. The narrative has been considerably altered and I hope I have added a few more scares. I will let you judge if this works or not.

Many cuts and additions have not been listed.

Thank you to boon23, AVP and ThrowgnCpr for your constant support and help. I would also like thank Transor, Akitsu, FatherMerrin and Ocarina654 (who I miss very much) for your encouragement. 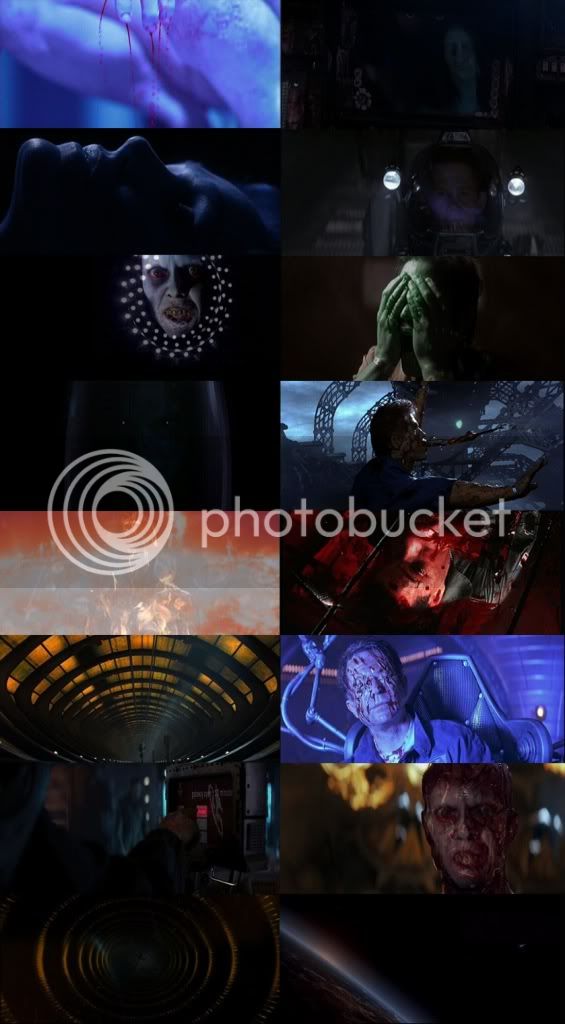 I know what I am doing today!
Z

Looks awesome! I enjoyed the original a lot, but thought it could be tightened up a bit. Looks like this will do the trick! As soon as I get some free time, I'll be sure to check it out.

(Nice choice of Prodigy in the trailer, btw)

I'll watch it this week I think.
Liked the original, but I did not see it for a long time.
A

Really solid work Mollo. Tightened up the plot, made things a lot scarier, and best of all... gave me a new ending that creeped the hell out of me.
A

Well, just when you think Mollo has come up with a project that reaches too high... he shocks the hell out of you with a rather brilliant piece of editing.

Enter Killer Horizon, which takes Event Horizon... a decently scary movie... and turns the horror volume up to 11.

Mollo wastes no time in exposition that isn't necessary... getting us to the ship a lot faster, and in much better style than the original. There's a nice tension that builds up the entire time, culminating in an ending that is truly disturbing and spectacular at the same time.

There's a few repeated scenes that are there... but they're intentional to rack up the tension and expand certain scenes and dialogue. This works well within the framework of the film though, as it illustrates Weir's descent into madness.

What really struck me about this is the change of focus... the original movie stars with Sam Neil, then changes to Lawrence Fishburn, then for some reason ends up focusing on the blonde girl. In this, the focus tends to remain on Neil... even when giving time to the other actors. You can tell there's things going on in his mind even when he fades into the background of the narrative... and that the others are living on borrowed time.

The most interesting part of the movie has to be the new ending, which is utterly flawless in it's execution. It leaps beyond the cliche and offers something truly new... and vastly more interesting.

"Human will be forgot. Their history dust." Indeed.

I just got done watching this, and I highly enjoyed it. This was an awesome fanedit to take a movie and provide a new spin. Perfect timing with Halloween right around the corner. I think people will really enjoy this. The combination of sci-fi and horror was nicely mixed here.

VIDEO QUALITY: 5/5. It was fairly crisp. I noticed some pixelation around stars at times, but other than that it was good.

AUDIO QUALITY: 5/5 nice. the additions were seamless. The only thing that stood out to me was the end credits: the music seemed a bit loud, but overall for the edit, very nicely done.

Really I can give this nothing but a 5-star rating with a couple minor quibbles (see below). It was a great fanedit, and I recommend this to anyone who liked the original, or wanted a different experience from it. The extra scenes were integrated well. There were only a couple times where edits felt a bit awkward. When Justin first enters the core, the new scenes seemed a bit odd and out of place. See spoiler for other spot:

[spoiler:3rtskelp]Also, the ending was awesome, but jumped a bit for me. All of a sudden the ship is exploding, and everything is being sucked out, and then we transition back to the core. I loved this ending, but I think the transition from the ship going crazy to this was a little jarring.[/spoiler:3rtskelp]

Thanks for the cool movie Mollo

Thank you for the reviews , I had seen this version so many times, I sort of lost sight if it worked.

Funny, but Justin now being tempted to explore the core is the sequence I was most happy with in this entire FanEdit!
A

Indeed. In the original version, Justin just kind of stupidly puts his hand in... and gets just deserts for curiosity. In this version you get the impression that something inside the darkness actually tempts him into doing it, thus freeing it's power to influence the rest of the ship.

As for the other part, I agree that it's a bit jarring... but it adds nicely to the feeling Mollo seems to have been going for.

Nice to see I wasn't the only person to be blown away by this... I was beginning to think I was a bit biased. ^_^

Overall I enjoyed this edit very much.

I am a big fan of the original and felt this was a great companion peice and had a much better ending.

I agree w/ ThrowgnCpr that the 'Justin being tempted' scene was a little wonky but that could be because I am so used to the original. However, I really like what the scene intended to do/show (Justin being tempted to enter the dark rather than Justin the curious little baby bear) its more plausible, more creepy and establishes the ship as more of a malevolent force earlier on.

The new ending and the presentation of more gore scenes was so much more satisfying than the original IMO despite its 'jumpyness'. (everything happens quickly at the end, Capt Miller is on the bridge then he is in the core, etc.)

Despite what I say, I cant criticize Mollo's editing because in all honesty I cant edit this well. Could it be better? I suppose it could but what cant be improved? Overall it was highly enjoyable new take on an old favorite and for the most part was seamless.

Keep up the inspiring work Mollo!

Right, now I know the sequence you mean. Captain Miller is on the bridge and then is transported to the core. This is intentional. I wanted to show the sick playfulness of the Evil. From the point Dr. Weir pressess the red button on the bridge, everything after it is an evil game.

As for the "a little wonky" scene with Justin being tempted, It is the sequence I am most happy with in the whole of Killer Horizon. Weird!

Mollo said:
Right, now I know the sequence you mean. Captain Miller is on the bridge and then is transported to the core. This is intentional. I wanted to show the sick playfulness of the Evil. From the point Dr. Weir pressess the red button on the bridge, everything after it is an evil game.
Click to expand...

Ahh!, That makes more sense, I think my memory of the original is what messed me up there.
I assumed that Miller got there of his own accord like in the original, But if your intent was to have him transported there by the ship, that explains it. he did have a WTF? look on his face so I probably just misinterpreted it.

I have to quote the Phantom Editor "that is sometime hard to forget the original while watching a fanedit".

In the original Justin "Baby Bear" simply puts his hand into an unknown substance with no attempt by the filmmakers to give him a logical reason for doing so. If this is a highly trained rescue crew as depicted in the original, he simply would not have done such a stupid thing. With Killer Horizon there is a reason for this action and it is character driven. Justin is obviously sexually inexperienced and the core plays on that by tempting him to probe it. I think, embarto1 your "a little wonky" comment needs clarification.

Let me try to clarify,

The premise of your scene is great, it makes much more sense than in the original film but I wasnt expecting it and the new scenes kind of feel out of place compared to the EH scenes.

I love what you are trying to do with that scene by giving Justin a more plausible reason for entering the dark, I just didnt love the scenes you chose to illustrate it.

I dont mean you any disrespect Mollo, I just dont know any other way to clarify my "wonky" comment. the 'sexy girls' just felt out of place.

Theres nothing 'wonky' about your editing techniques though.

Suggestion - I'd try to superimpose some sexy 'come-hither' imagery (or whatever lures Justin in) over the dark portal.

That's great embarto1, I just needed to know in more detail. Thank You.

I have not seen the original for a while now, but this version is much more "in your face". I liked that!
I did not remember the Justin scene, but this new one worked really well to me.
I my opinion the pace is maybe a little too fast to create a real growing tension, but in the meantime it is
satisfaying to go straight to the point without too many useless sub plots.
I myself maybe only need a little more expositions scenes to really take care about the caracters.
The new ending is definetely killer! GREAT JOB.

Since it's my first (little) review on a fanedit I don't know if my rate worth something,
but to me it's a 4.5/5 too, easily!

Thank you for the review. I think you are right about the Fanedit being fast. Some more character development would have added to it, you are right there too. Good Review and Thanks you. Mollo
D

I watched this earlier today and i thought this fan edit was an incredible bit of work! The best one i've seen yet, and i've downloaded loads of them. Event Horizon is a very good film in it's own right, but you've improved on it and made it a lot creepier. The sound quality and picture quality is near perfect. The new ending has to be one of my favourite film endings now, even though it was created just for this fan edit. I'd recommend this fan edit to anyone on these forums
You must log in or register to reply here.
Share:
Facebook Twitter Reddit Pinterest Tumblr WhatsApp Email Share Link
Top Bottom