I am very pleased to announce the approval of my first fanedit by the Academy:


Brief synopsis: After viewing an initial cut of director Tod Browning's Dracula in late 1930, Universal Pictures president Carl Laemmle, Sr complained that the film gave him the "heebie-jeebies" and ordered that it be re-edited. Several minutes of film were cut and a number of scenes were rearranged, resulting in numerous continuity errors and giving the third act a glacial pace. Although the missing footage remains lost, this edit restores the continuity established in the original shooting script (and Melford's simultaneously shot Spanish-language version of DrÃ¡cula) eliminating most of the continuity errors and quickening the film's pace in the third act.


Two versions of my fanedit are available. One using film elements taken solely from the release version of Browning's film (the "purist" edition), and a second incorporating additional cut scenes and alternate footage taken from the Spanish-language version of the film directed by George Melford and shot on Browning's sets at night.


Change list: The shooting script for Dracula is broken up into seven parts, labeled A through H, with each part broken down by scene number, such as A-1, A-2, B-1, B-2, etc. This table compares the continuity of the release version of the film, Melford's Spanish-language version, and my fanedit. Under each sequence is the range of scene numbers covered, and the begin and end time in the respective versions. In general, I've ignored scenes that were omitted from the shooting script for both the release version of the film and in Melford's version, though I've included a note where I felt it necessary. Where a number of scenes run consecutively in a particular sequence, I've included both a beginning and ending scene for clarity.


I apologize for the poor quality of the screencaps. As we're unable to post using html, the table has been converted to a jpg. The table is a bit long, so I'll break it up into two posts. Here's the first: 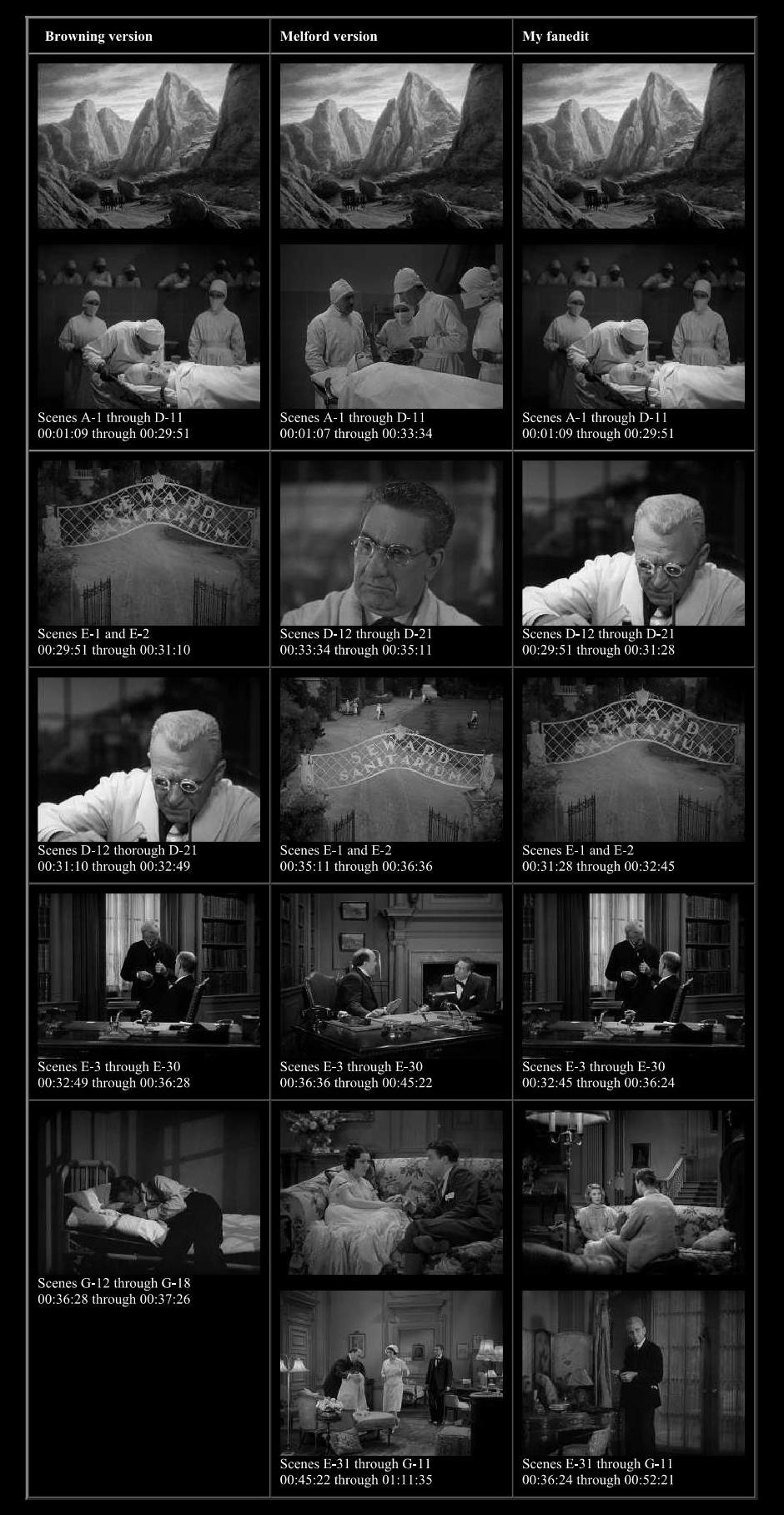 Billy, I must say there are aspects of each film I enjoy.
The style, inspired effects, and overall sexiness of the Mexican version make it great alternative.
Mr Lugosi really scores over Villarias, however, as does Van Sloane over Arozamena.
Lupita Tovar has it all over the brittle Helen Chandler, though.

I appreciate the screen shots.
What about the sound mix?
Are you sticking with the 1931, or did you incorporate the Glass score?

I'm sticking with the 1931 soundtrack. I think the Glass score has it's own merits, but I prefer the sparse use of music in the original.

I'm watching FE.DB for this.
As well as that other site.

Vultural said:
I'm watching FE.DB for this.
Click to expand...

I know what you mean, but that's not what it's called.

Oh, I see.
It's actually IFDB, which is interesting.
Does that mean IFDB is not necessarily exclusive to FE, but will include fanedits from all over?

Don't mean to jack your thread, Billy.
Any notion of when this will be available?

Vultural said:
Oh, I see.
It's actually IFDB, which is interesting.
Does that mean IFDB is not necessarily exclusive to FE, but will include fanedits from all over?
Click to expand...

From the front page of IFDb:

The Internet Fanedit Database (IFDB) is a database of fanedits vetted by the Fanedit.org Academy*. IFDB is intended to provide information about what edits have been made, and allow fans of fanediting a means to review edits that they have seen. Neither IFDB nor its parent site, Fanedit.org, host links or files for fanedits.

*Older edits which pre-date Academy approval may not meet the same quality expectations as newer fanedits, but are grandfathered in as they are part of the fanediting history, and in addition to their own entertainment value, help provide context for the evolution of fanediting as an art and educational exercise.
Click to expand...

So to answer your question, it only lists edits by faneditors approved by FE. This is done for quality control purposes. We do of course reach out to non-FE editors from time to time when something interesting pops up, to see if they want to submit their work for review.

But yes, back to topic.

I'm not sure when it will be added. I haven't received a submission form as yet.

You haven't gotten a report back or you haven't received the submission form?
If the former, that can take awhile.
If the latter, you submit it yourself from here -
http://www.fanedit.org/forums/forms.php?do=form&fid=3
Good luck. I am interested in this.

This has already been approved by the academy, he does not need a firstling submission form. It's being handled.

congrats on finishing and on the approval, billy son of bat!
sorry i couldn't help out more with feedbackâreal life got crazy busy.

it might take a while, but i am looking forward to viewing the finished edit.
B

I can't wait to see it... Checking info daily until I can find it... Any chance of uploading it to MySpleen as torrent?

binyaqzan said:
I can't wait to see it... Checking info daily until I can find it... Any chance of uploading it to MySpleen as torrent?

6. Discussing The Availability of Fanedits. NEVER post a link in the forums to any website where you can download fanedits. And when saying where something has been uploaded, DO NOT use full URLs. Generic names are acceptable (rapidshare, mediafire, info, etc.) but please DO NOT get into discussions of download sites.

Is the bluray ISO the combination of Melford and Browning, or just Browning? Sitting down to watch and the file doesn't indicate which one it is... Thanks...

The Blu ray has both versions on it.
B

What's so divine about this edit is that Kristen Stewart has been removed almost entirely. Unfortunately, all the Kate Beckinsale scenes were excised, which should make the People for the Ethical Treatment of Werewolves rather happy, I guess. The scenes were reordered so that Van Helsing comes off as an even greater know-it-all badass, in that he clearly foresees the production of Blacula.