(DONE. PM ME IF INTERESTED) The Adventures of Superman - The Kryptonite Saga Vol. 2

the feedback I've been getting so far has been pretty good, so I thought I'd continue making at least a few more of these audio only edits. Since nobody's going to listen to the original episodes anyway, I felt the need to give you an impression of what it is I'm actually doing though.

The second part of THE KRYPTONITE SAGA spans 19 episodes with an original runtime of 224 minutes, that I edited down to 87 minutes, using a bigger variety of musical cues and sound FX than in the first one. This edit was all about the pacing. I didn't only cut intros, outros, commercial breaks and recaps by the narrator, but also everything repetitive or unnecessary within the dialogue. (Of which there was A LOT.) I didn't cut anything story related though. If I kept some of the repetitive stuff it was, because I thought the bits surrounding it were either funny or interesting. I also rearranged certain bits of dialogue and the order of some of the episodes to make it flow more smoothly.

Here's a before/after sample to give you an impression of how much I cut and what rearranging the dialogue (hopefully) accomplishes. The videos itself look like shit, I know, but by uploading the sound samples to VIMEO instead of SOUNDCLOUD, I can embed them here.


(I just realized that the volume of the SFX is a little loud and uneven at times. I'll fix that. THIS IS STILL A WORK IN PROGRESS. Feedback is always welcomed.)

Sounded nice.
And you are correct in that you can never remove too much needless exposition.
S

Okay. I honestly hope I'm not boring everybody to death with all this Superman On The Radio stuff, but I just can't help it. This evening I was listening to the audiobook of Larry Tye's SUPERMAN -THE HIGH-FLYING HISTORY OF AMERICA'S MOST ENDURING HERO. It's a great book if you like Superman.


Chapter IV tells the story of The Adventures of Superman, its influence at the time and on Superman canon in general. This is a revised excerpt I rearranged and cut from 35 min. to 20 min. I think I'll add it to one of my next edits as bonus material.

If you're a Superman fan and you're still not sure whether you should listen to my stuff or not, try this. It's essential information. (Or so I claim.)


A BRIEF HISTORY OF SUPERMAN ON THE RADIO

I made a visual trailer for my next edit. Since I didn't have any other video editing software than MOVIEMAKER I decided to try WONDERSHARE. It's freeware. It's also a nightmare to work with. It's worse than MOVIEMAKER. One video track, one audio track and a couple of shitty drag & drop effects. If you move one video bit you automatically move the ones following it, because they're attached to each other. More than three hours in I was so frustrated, that I finished the trailer just out of spite. Fuck you, WONDERSHARE!

I used unrelated images from the Fleischer Cartoons. And, yes, this is me (kinda?) apologizing for the trailer.


Anyway. I think this trailer gives you an idea, what I was talking about when I said, the story get's more interesting if you look at it within its historical context. (Released in October 1945)

It's also fun to listen to if you don't care about things like that. The German accents are hilarious, it's Superman's first encounter with Kryptonite ever and I love Perry White in this serial. If you ever wanted to hear Clark Kent get dragged away to a rest farm, this is definately for you.

This time I used a bigger variety of musical cues (bits from all Superman soundtracks, Wagner, Mahler, etc.) and more sound FX. In this trailer i.e. you can hear Christoph Waltz' laughter from Inglourious Basterds.
S

I enjoyed your first release Siebener, so I'm looking forward to hearing this one when it's out!
S

If anybody wants to listen, send me a PM.
S

Congratulations on the release, Siebener! I'll be listening as soon as I can, and I look forward to doing so!

I've got it queued in my to-listen-to pile, Siebener.
I'll scribble a review once I sit down one night.
S

Vultural said:
I'll scribble a review once I sit down one night.
Click to expand...

Thanks for listening and taking the time to write a review!

About the hiccup at 72:21: I actually did that on purpose. I thought it was kind of ... funny, to just cut away, right when the action starts.

About the cover: I want all four covers of The Kryptonite Saga to look alike except for the title, the number up left and the colour of the SUPERMAN logo. Also, there is no decent sized version of the cover of the Smithsonian CD online. Plus, the image of the Atom Man they used doesn't even look like he's described in the radio serial, but like he looked in the 1950's movie version. 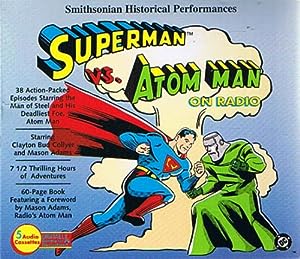 One more thing: I cut 140 minutes from the original versions, for crying out loud! If you think this is still too slow, I'm not sure you'll enjoy the next two parts.

(Can I move this thread myself, since the edit is not in the works anymore?)

Siebener said:
(Can I move this thread myself, since the edit is not in the works anymore?)
Click to expand...

No, only staff can move threads. But someone else already did it.
D