Doctor Who-Twice Upon A Time: A Fanedit 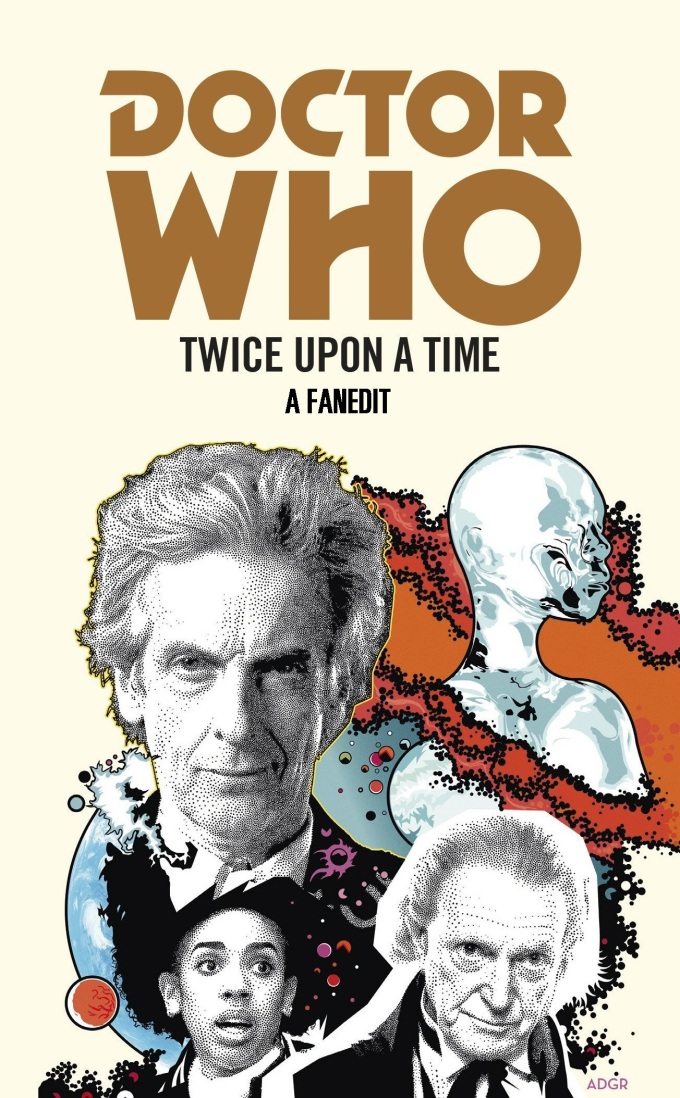 This episode could do with a nice spring clean.

There really isn’t a hell of a lot of point to the sexism deflection that this episode pads itself out with. Within the context of current history, I suppose there’s some fleeting relevancy, but Doctor Who ought to be timeless, and it’s characters should not be dragged down into political soap boxing, however subtle or unsubtle. This is what has killed the show for many a true fan, and as much as I still love the show, it does make me cringe a little too. It’s like attending a council meeting with your parents on a Sunday, reminding you of the real world awaiting you in the week ahead. What happened to weekend/holiday escapism?

The sexism need not exist at all, as you’ll find here…pretty minimal edit all the same, nothing too radical, just keeping it tightly focused on the adventure and not the agenda.

-Ben and Polly cut. On top of their “Nu Who” versions contributing little to the story , I never was a fan of the weird aspect ratio fidgeting.

-“I am younger” exchange removed

– References to Twelve as a nurse removed, also the exchange about the brandy and guitar are omitted as well as the sexist remarks about Polly

-Classic Doctor no longer says “sunglasses? Indoors?”, I found the initial reaction when he sees them better than anything spoken afterwards and it informs the audience of how he feels anyway

-Cut Bill’s initial reveal as a member of Testimony. I hold it back a bit longer just for more of a shock reveal.

-First Doctor’s regeneration to Patrick Troughton cut in an attempt to, for one, avoid the aspect ratio fidgeting, and “fix” the continuity error of the Doctor collapsing before he opens the TARDIS door to let Ben and Polly back in.

Shortened Capaldi’s exit speech considerably. Decides to regenerate after he realises the universe will get it all wrong without him.

Also, I chose to omit Jodie getting booted out of the TARDIS, end credits skipped
Update: Since releasing the original version, I have since watched a few other edits of this episode and I feel further improvements can be made, some inspired by the other cuts I saw, but I gave the edits my own twist


-Capaldi and Bradley's banter greatly reduced, time freezes directly after Twelve says First's face is all over the place due to holding back regeneration

-Testimony ship now abducts the TARDIS before the 'male nurses' dialogue can kick in, this allows us to skip other unnecessary conversations about The Doctor's guitar and One dismaying that Polly isn't around to do the cleaning up

-Twelve's "cut out all the jokes" line is cut

-One's remarks regarding Bill giving the TARDIS a spring cleaning is cut, helping bridge the transistion between One's missing lines and Twelve interupting him is the line "I kind of miss it" in regards to Bill missing her travels with The Doctor.

-One's reactions to having the sonic sunglasses placed on his eyes cut, as is the line "what's browser history"

-The infamous "made of glass/fairer sex experiance" exchange cut.

-Bill and Twelve's argument minimised as Bill finds The Doctor's doubts about her amusing. One's threat of a spanked bottom cut

-Regeneration occurs, but we cut away to a "TO BE CONTINUED" before we see anything from Thirteen.

Nice cover! And it's nice to see a Doctor Who fan editor talk about sexism without descending into paragraphs of cringe.

Just thought I'd pop in to announce I've taken another stab at this after viewing an edit of the episode on MySpleen. I took some pointers in how the editor approached things, though I was careful not to outright rip him off and added my own touch to the scenes I've trimmed. I'll be updating the IFDB article to reflect the changes in this version. The original version will still be available as it's a different kind of cut. I might do a third version also, with a special tease for Jodie at the end (I'll keep how I approach this a surprise)