TMBTM said:
Yeah, why they don't just call him "Liam Neeson" in the movie anyway (Zeus is so overrated).
:drum:
Click to expand... 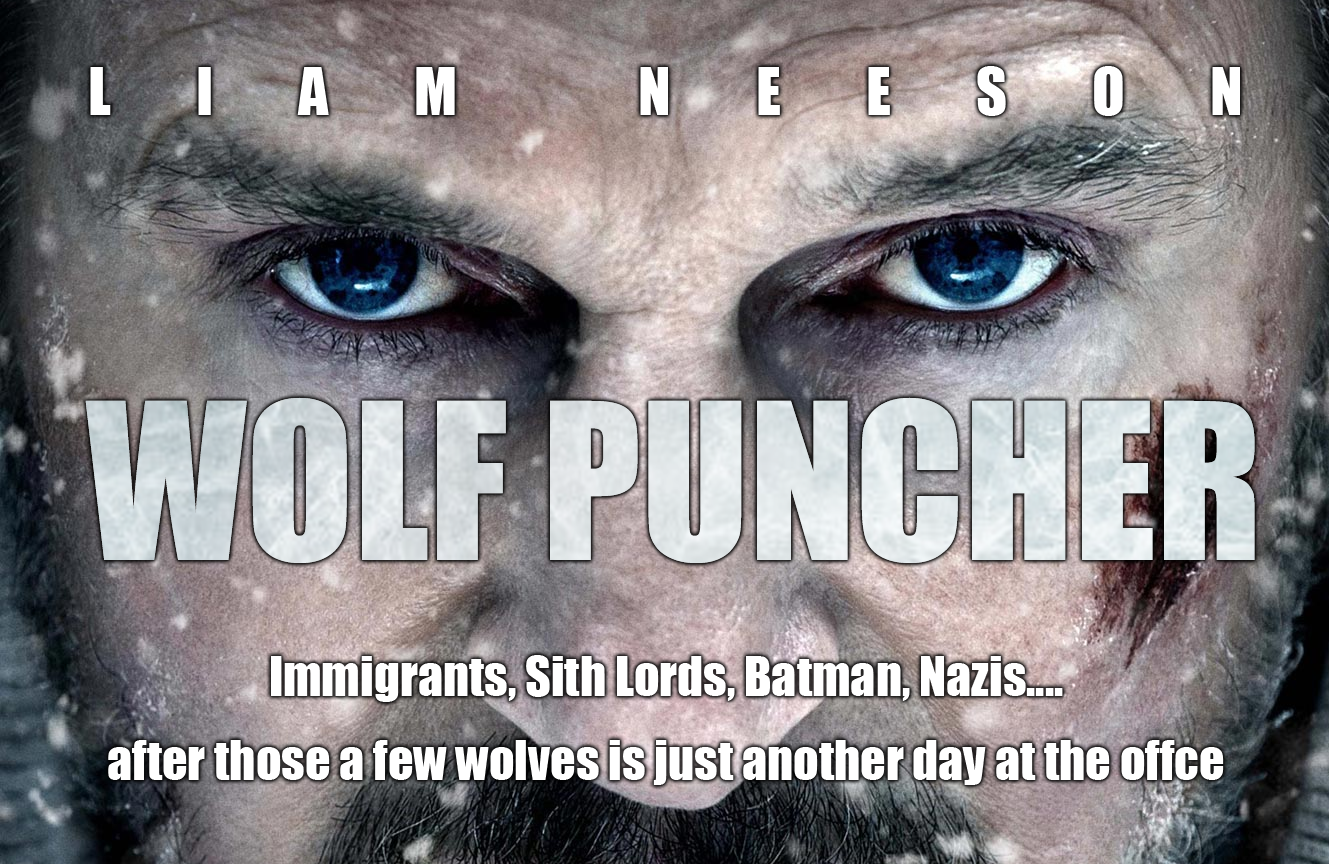 Holy crapping balls, ths following started out as a review and ended up as an epic. I will post it so that it wasn't a complete waste of time but I totally understand if nobody reads it.


Ok. sequel watched. Sigh. I'm probably going against the grain here as it seems everyone thought it was an imnprovement, but in my eyes it is a letdown.

The pro's:
The pacing is better, at least in the first half. Persius's setting is introduced, not *all* of the dialogue is entirely expositional, there is an attempt at some character development. The special effects are, on the whole, an improvement, especially the final battle against Chronos. The labyrinth is impressive to look at and reminds me of Hellraiser 2. Also the film manages to create a good atmosphere visually, the ancient temple and the island of the cyclopses reminded me a little of Jason and the Argonauts. We get more scenes with the gods this time, Zeus and Hades get more lines. Finally, Sam Worthington is a little less wooden.

The cons:
One of the things I like about Clash is its grittiness. A platoon of soldiers are sent on a dangerous mission they don't want to go on, every enemy they encounter is truly ferotious usually killing men many and only being overcome through a team effort, and in the end they follow Persius into hell because he has inspired them, where they subsequently (spoiler for clash)
all meet gruesome fates. Only Persius emerges as the blood-splattered victor.
. While the 1981 movie isn't as good as Jason and the Argonauts (a pretty undesputed classic) it does succeed it in being darker and edgier, which is something Leterrier's remake stayed faithful to.

Wrath, however, follows the example of Conan the Destroyer and other fantasy sequels by making the film more family friendly. The whole film has a lighter tone, with much of the dialogue being horribly 'funny'. For example, in one scene the film's comedy sidekick known as The Navigator is being held upside down by a cyclopse. 'Are you done HANGING around?' Persius asks, 'just giving him an EYE full' the navigator retorts. Dreadfull, truly dreadfull. Puns like that have one audience in mind: the under-tens and are reminiscant of Threepio's 'I feel quite besides meself, this is such a drag' from Attack of the Clones.

Clash had a cast of underdeveloped but still identifiable characters. You don't know much about these characters but you do get to know them a little - especially when watching multiple times, whereby you tend to pick up individual quirks and mannerisms - and ultimately care about them when they die. Wrath has only three mortal characters and non are particularly interesting. Persius gets the most development, some which makes sense (his developing a new family which is his main motivation) and some which directly contradicts the original (he now feels inadequate as only half a god, while before he hated the gods and his pride came from his humanity alone). Perhaps he's coming to accept himself and his father, but it is poorly handled and the dialogue suggests the film makers only paid the most superficial attention to the original. Of the other characters, the Navigator starts out with potential but is used purely as a comedy sidekick and even gets the same conclusion as Jar Jar Binks in Phantom Menace!
(He is made a general for no reason whatsoever in a completely pointless battle inserted only because all films have to end with a CGI battle)
Finally we have Andromeda who is generic warrior-queen with a worringly manly growl. There is nothing interesting or unique about her whatsoever, she is simply the requisite love interest.

Unlike the original, this film has no consequences. The only mortal to die is the
generic 'old man who has nothing left to live for so sacrifices himself so the journiers may continue'. Admittedly he is played by Bill Nighy who gives a brilliant and funny performance (he plays the role as a Yorkshireman for no particular reason, eeh by gum, blooody 'ell, down t'mines b'fore supper n all that. excellent stuff ).
The fact that the film is of no consequence is demonstrated by the ending, in which
Persius proudly passes on his sword to his son so that he too can become a Greek Hero. In the previous film, life as a Hero was a burdeon, it involved being courageous and noble, but it came at a price and you can understand Persius's reluctance. A hero will live well and die young. Now one *can* understand him coming to accept this life, and even passing it on to his son, but the film shows a complete disregard for the issues of such a thing. Its a childish take and I think suffers for it. Consider when Batman encourages his young ward to become Robin: in the earlier, simpler comics this is acceptable, but in the later, more complex and better comics, such a lifestyle is recognised for what it is. When Batman takes in a young Jason Todd and trains him up as a new Robin, he ends up being murdered and Batman has to live with that. Either the Persius of Wrath is an idiot or painfully naive or completely reckless with his own son. Of course the truth is that its the film/film-makers who are the first two of these, and it trickles down to the character).
This review had rambled on longer than intended so I will begin to wrap it up. Wrath fails in three more key areas. Firstly, the plot is almost a complete rehash of the first film: the gods are going to unleash a deadly force, Persius must stop it by finding the only weapon that can kill it, he meets a creature involved-with-the-gods in a distant cave who gives him the directions to hell where he fights a monster collects the weapon then uses it while flying on the Pegasus to destroy a 200 foot beastie.

Secondly, the use of the Gods in this film is very poor. The motivation for the villain
Ares, the god of war this time
is that he is jealous of Persius because he thinks Zeus loves him more. I know jealousy is a theme with the Olympians, but this is still poorly handled in my opinion. The original related to genuine feelings of love hate betrayal and mans relations with god. Man has turned away from the Gods, this induces their rage. Simultaniously the gods are losing their powers and turn to Hades, but Hades was betrayed by Zeus long ago and uses this opportunity to take power. That is a plot worthy of the actions of gods... in Wrath, the story plays out like a cheap melodrama. Hades' motivation is good (he fears death, understandable for a god suddenly having to face mortality) but this is inconsistent with the first film: Hades was the only god who remained powerful because humans stopped loving the gods but they would never stop fearing death, the source of his power. But the biggest problem with the gods story is the inclusion of many Christian references. Zeus is turned into Christ and his whole story is that of Christs. It is poorly done, doesn't fit the character, and doesn't have any place in a film about the Greek pre-christian gods! I don't mind that these films diverge from the original mythology but for me this is a step too far. The Kraken isn't a greek myth but its an incredible beastie to watch. Reducing Zeus to a character of love and redemption, and Hades to a simpering Judas character/repentent Lucifer, it simply a kick in the face.

My final criticism in the Illiadian review is might seem like a minor one, but it really held the film back. The score is one of the dullest I have heard, and sharply contrasts with the incredible soundtrack of the first film. Visually the film is impressive, but it is always held back by 'generic action music', 'generic mystery music', 'generic love music'. It completely detracts from both the settings and the monsters: two of the clear highlights of such a genre film, which the visuals of the film actually capture rather well.

To sum up, my rewatching of Clash of the Titans (2010) made me realise that it was actually a pretty good film, which only lacked characterisation and needed to slow down. The sequel does slow down (in the first half at least) but the characterisation it gives us is dreadful and we'd be better without it, the dialogue is even worse than the original, the film has a childish and light-hearted tone which drags it down, and the score is horrible. The special effects are an improvement, but the action scenes are completely lacking in tension due to 1) the fact that Persius has now developed superpowers (he can now headbutt sandstone pillars and be completely unharmed) and 2) the fight scenes that take place are completely pointless (most of the guards die fighting a God - why would they even attempt this when they know the gods are immoirtal, then the film ends with about 150 men being led into a battle against a man the size of a volcano made entirely of fire). I don't understand why people think this film is better than the original: perhaps they like bad puns and warrior queens, maybe its because the visuals were prettier and we saw more Liam Neeson this time around. Whatever the reasons, I am forced to disagree on almost every level.