CAPTAIN MARVEL is the name of several superheroes. A Superman look-alike in the 1940s. A Kree alien in the 1960s, named Mar-Vell, who died of cancer but not before passing on his powers to Carol Danvers, a fighter pilot from Earth, who went by Ms Marvel before taking over the title of Captain Marvel. In between there was Monica Rambeau, who can turn into pure energy, but she changed her hero name. Marvel Studios used many elements from the comics that, mostly, make sense in the space of a single movie. Excelsior!

The CAPTAIN MARVEL movie has a tough mission: introduce a powerful hero late in the narrative, in a way that audiences will accept. Is it a cheat to introduce a game-changing hero at this point in the Infinity War story? If Marvel hadn't made this movie, they'd have Stark invent an ultra-powerful widget or Dr Strange conjure up celestial support. Better this way, where we get a fun hero to enjoy rather than a one-off invention or incantation.

CAPTAIN MARVEL - IT’S 1995 ... edition is a light edit. There weren't many frustrating moments, they were just distracting. Now YonRogg appears a good guy longer, so we're not yelling at Carol for half the movie that “He's lying to you!". Their rescue mission is clarified. The Skrull memory-machine is more straightforward because you can't make memories on the fly. That’s not how remembering works! No AT&T joke. An extra moment of Coulson and Fury. The mid-credit scene is cut and offered as a separate clip, so you can watch this movie before Avengers 1 and not yell "Oh come on! I didn’t want to see that yet! I first want to enjoy Avengers 1 through 3.".

Extra: The mid-credit scene, separately, so you can watch it between Avengers 3 and 4.

1) Add 4 seconds of deleted scene showing the monorail in the city. Insert before existing monorail shot.

2) End YonRogg talking to Carol on the monorail with "Control your impulses", to cut some condescending text and him poking her forehead. At this point it needn't be so obvious that he's a bad guy: Carol finds this out over the course of the movie, we can too.

3) Trim 5 seconds of YonRogg's exposition dump for the rescue mission, to improve clarity.

4) Small trim of YonRogg telling the natives he doesn't want to hurt them.

6) Small trims to Carol's flashback while hooked up to the Skrull machine. To minimize the appearance that the Skrulls can make Carol create memories (if she didn't read Lawson's name tag in her past, she shouldn't be able to bring that into focus in her memory).

7) Cut AT&T joke. The gag breaks my suspension of disbelief that Carol can MacGyver an interplanetary phonecall out of a pay-phone and a gameboy. Now Carol gets cut off by YonRogg instead of Ma Bell.

8) Add 15 seconds of deleted scene of Fury walking into Coulson in the corridor. Cut before Coulson sees Keller. The music leading into the next shot (Carol on motor bike) plays beautifully over Coulson walking away in the corridor.

9) Cut mid-credit scene of pager at Avengers building. Now you can watch Captain Marvel at any point you wish in the Marvel movie line-up, you don't have to stick to the original cinema release schedule. You can watch the scene as a stand-alone, though I recommend you add it as post-credit scene in Avengers 3, and it's scene of Fury & Hill is shifted to mid-credit scene.

With thanks to @stferguson78 for convincing me to share this edit. 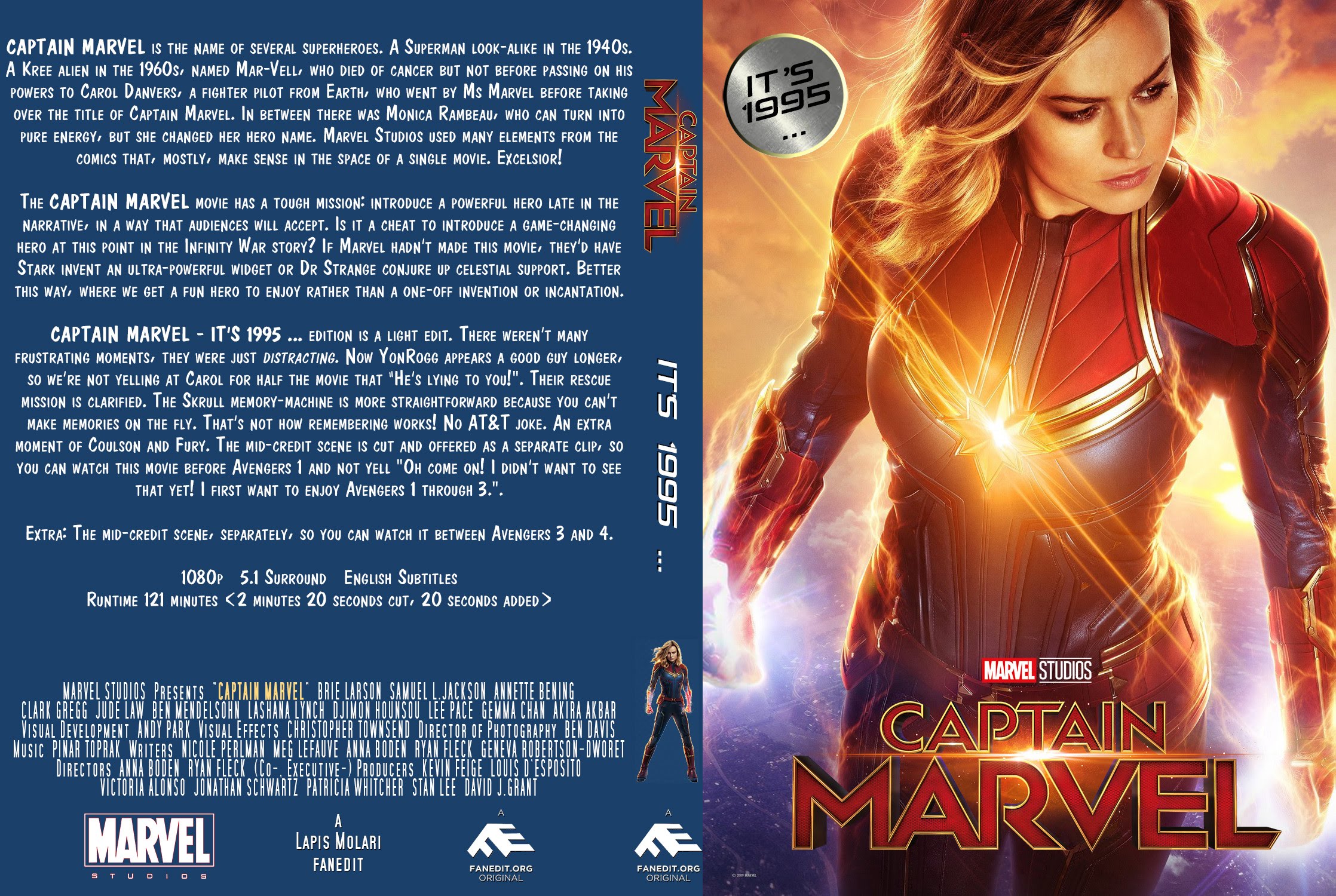 Excited to see this!