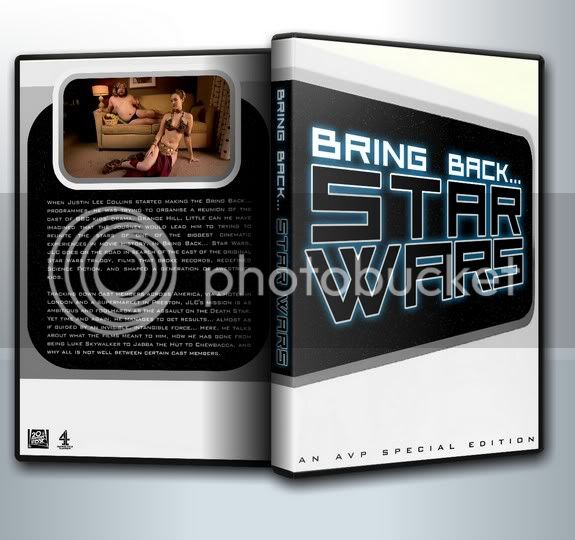 by AvP
What is it about? Justin Lee Collins is on a quest to track down and reunite the cast of one of the most celebrated film franchises in history: Star Wars.

Description:
Bring Back&#8230;Star Wars aired on Sunday 14th of September 2008. Collins attempted to reunite the stars of the original Star Wars trilogy. He was unable to secure any kind of meeting with Harrison Ford (Han Solo). He was offered an interview with Mark Hamill (Luke Skywalker), albeit for the price of $50,000; after raising several thousand dollars, Collins was unable to negotiate the price any lower, and was forced to abandon any hopes of meeting Hamill. Collins did, however, succeed in securing interviews, through a combination of deception and surprise attacks.Only Bulloch, Davis, Baker and Prowse were able to attend the reunion in London. Daniels called to say he could not attend. Fisher recorded a humourous video message to be played as a holographic message, akin to the one in the original Star Wars film. Mayhew and Williams also made short video clips to be played similarly, albeit without audio. Justin also had a lightsaber battle with Davis in which Davis was the victor.

Time needed for the edition: 2 Days

I'd never heard of Justin Collins before this, but I'm glad I have, especially since he did follow-ups in this "Bring Back..." series. He's sophomoric at times (and crude with poor Billy Dee at one point), but he's a likeable guy despite some of the antics. He was able to talk to a nice group and you really see some of the personalities come out, for good or bad (Daniels, the master thespian...). Definitely a fun watch for any Star Wars fan.
You must log in or register to reply here.
Share:
Facebook Twitter Reddit Pinterest Tumblr WhatsApp Email Share Link
Top Bottom