This new version entirely replaces the old one. Several plot flaws were corrected, new scenes created and the image and audio quality were drastically improved. 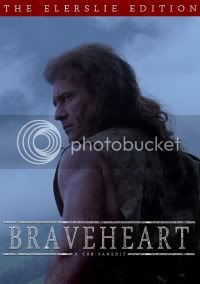 Fanedit synopsis:
This edit of Mel Gibson&#8217;s Braveheart deals with the constant growing sadness of the original movie and turns into a true, historically more accurate hero tale. Less romance, true to the brave heart.

Intention:
The intention was to create a version of Braveheart that I would want to watch more often by addressing issues with the original and by making it shorter.

Editing Details:
Mel Gibson created an epic masterpiece, which still ranks among the best movies ever made. It received 5 Oscars and was a huge success, yet the length and also the mood kept a lot of people from watching it again and again, which is a pity for a movie of this tremendous strength and quality. I moved the torture ending to the beginning to completely change the mood of the movie and turn the focus rather on victory than on defeat. The new beginning reveals the cruelty of the suppressing English kingdom and William Wallace&#8217;s desperate wish for Scotland&#8217;s freedom. In the original movie things start sinister, turn to good, turn to even better and then take the road down and even more down to defeat. The fanedit starts sinister and does not get that depressing in the end. Moving, yes. Disappointed by the defeat and the betrayal, yes. But still open for a good ending.
The removal of Princess Isabelle worked really well and made William Wallace an actually more believable character, because his romance with the Princess always felt like cheating.
William&#8217;s childhood was really well filmed, but had to be removed for pacing reasons.

Cuts removed/added/extended :
# The torture ending was moved to the beginning:
This was done to completely change the mood of the movie. The audience will know how and that William Wallace dies from the very beginning. It takes the sore feeling off the original ending and replaces it with the hopeful atmosphere of Wallace&#8217;s impact on Scotland.
# Robert the Bruce and Longshanks were removed from the torture ending: All major characters are shown in the original, when William Wallace dies, but since this scene is now the beginning of the movie, which also means that the characters are introduced, less was more. Too many people would have been confusing.
# Removed William Wallace&#8217;s youth: Although these scenes are really good and give the audience a nice picture of how it was to live in Scotland in the 13th century as a commoner, they slowed the movie down. Historically the youth of William Wallace is a myth anyway. Some scenes are referred to later on, like William&#8217;s first contact with Murron, but that could be corrected. Also the youth scenes give a first impression of the cruelty and incredibility of Edward the Longshanks, but he has plenty of room to prove that later on, so it wasn&#8217;t really needed.
# All scenes involving the King and Robert The Bruce were removed from the first half of the movie. They are introduced later and stronger.
# Princess Isabelle is gone entirely.
# Phillip, the homosexual lover of Prince Edward, is reduced to being a friendly servant. The homosexuality aspect is entirely gone.
# William&#8217;s dream of his wife is gone. Although a reference to their metaphysical bond, this scene was actually really empty and rather cold. There was no space in the fanedit, where it would have fitted.
# The assassin attack on William Wallace: removed, because Isabelle could not be part of it. The scene was rather good, but it was not possible to include it. 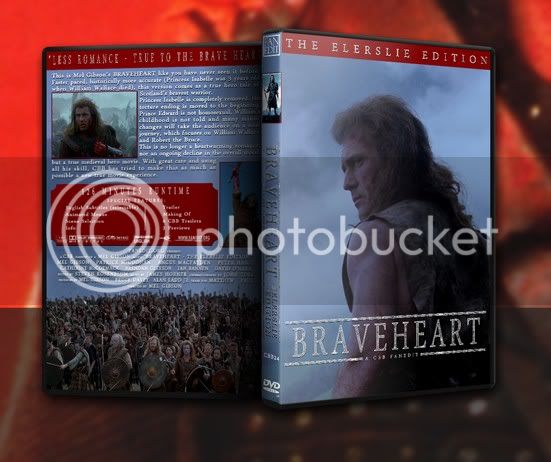 Cool Boon. I've always been meaning to get around to watching your version of this and now you've released your new version - could be on the cards for tonight!

I will have to check it out

I have this on disc now and plan to watch it soon.
H

Just finished watching this. I must say that the changes made in this edit absolutely achieved the desired effect. This movie is now about a group of men who fought for and won their freedom. The huge letdown that followed the betrayal of Wallace is gone due to the torture scene being moved. The princess and Philip subplots are not missed. This edit proves that with the right edits even very good movies can be made into something different (perhaps better) than the original.
D

Amazing. I liked Braveheart very much, but this edit makes me see it in a whole new light. The annoying subplot of the princess never rang true with me, and I'm glad it's cut out entirely. Phillip was fun, and I don't know how much is gained by his removal. Masterful cropping to achieve that, by the way. I did enjoy his line "We would stop them!" now seeming to come from the prince right before getting slapped. Moving the torture scene to the beginning does wonders, as does the cutting of the childhood parts.

I think I will find someone who's never seen the original and show them this version. I'm curious to see what they would say.

Nice to see your reviews, TC. I hope you're adding them to the actual edit pages and rating them too! (I used to be bad for doing only one or the other for some reason [boon remembers my forgetful days, I'm sure], so I thought I'd mention it to you early. )
D

Hi Ripplin,
I will leave my reviews and rate on fanedit.org as soon as my account is set up. Thanks for the heads-up.

Infamous TC said:
I think I will find someone who's never seen the original and show them this version. I'm curious to see what they would say.
Click to expand...

My wife is one of these people. According to her, she catched some bits on TV here and there, but did never sit down to watch it from beggining to end, altough we have it in our collection. Maybe this edit presents an opportunity to correct that

I'd love to watch this version. Am I being blonde or has the fanedit film download page gone?

Things have changed. Please read The Rules and Using This Site.

I see the MPAA have "changed things". No wonder I can't find the film.
L

Any hint how to get this fanedit, please?
Any help appreciated.

@"lastsaves" If this is your first time here please read our FAQ and Rules pages. They have some useful information that will get us all off on the right foot. More details on our policies, especially our Own the Source rule are available here. If you do not understand any of these rules send a private message to one of our staff for further details.
L