Book of the Dead

The Book of the dead is done


Looking back on the review and the edit i could have done more about the cropping of the original.
The center of cropping to 2.35.1 is not always right in some scenes but if you put every scene in the right center it's a tremendous work to get that right.
Years ago i worked on a edit of Triumph of the Will from Leni Riefenstahl named Hitler: The Rise and Fall and it was with other music like Pink Floyd , Eric Serra and many others, but the only thing that bothers me was the ratio: 4.3
Man i hate that ratio, so for me was it a challenge to crop that to 2.35.1 my favorite ratio.
So i put every scene in the right center but the editing gives me a damn headache,:-o it didn't work.
so the edit is still on a 4.3 ratio
Im still waiting to get my hands on a bluray 1.85.1 colorized version to get the perfect horror/music documentary


Back to Book of the dead.
It was a nice thing to put the old car of Campell in front of the cabin but the cabin was totally different
in the remake.
That was for me a moment to put the whole project in the trashcan because of the past and present idea but what the hell, maybe the owner rebuild the cabin, in my edit it's 30 years later so i give it a shot.


Well, if you wanna see it, i hope you like it, it was a lot of work to get this like i wanted, but if you don't, stick to the originals.;-)

This thread was accidentally moved to the wrong place by persons unknown.


Me.
Anyway, it's back to ITW where it belongs. Sorry for any confusion caused.

There's been quite a few Evil Dead combo's over the years normally using the first two or three movies......This one sounds great, it is an original idea and has a interesting angle. Looking forward to seeing how it progresses and ultimately if it works.

I'm curious to see how this turns out. 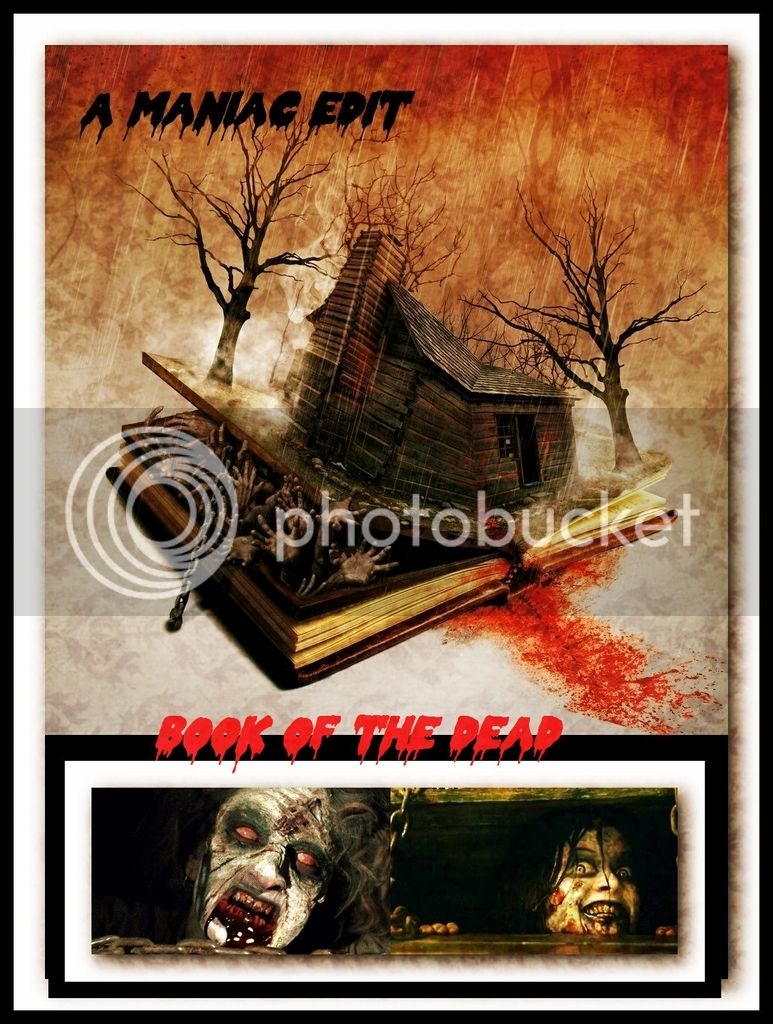 By both films, I'm guessing the original evil dead and evil dead 2? I've got an older trilogy edit I did. The film quality between 1 and 2 is very distinct and I was curious about how you were going to (or if you were going to) use some sort of process to bring the two together? I haven't seen your other films yet, but I have all of these so count me in to watch either way.

No. The original and the remake.
K

Ok! Interesting concept. That should be interesting. The original has a happy go lucky, almost comedic tone and the new one is so much more modern horror. I look forward to seeing a sample!

Years ago i saw some edit that brings Evil Dead and Evil Dead 2 (1987) together.
Well, it was a good edit, but the problem is this: Evil dead 2 is a funny movie, it has no serious story like the original.
Ash become a fucking comedian in Evil Dead 2 and 3 and both films are very enjoyable but it doesn't work for me to edit
that to the original.
So i came up with the remake and i think it worked.
The remake has also a few things of Evil Dead 2 like that "i swallow your soul" crap, well there is nothing to swallow
because i cut it out.
I have a lot of ideas to bring originals and sequels or remakes together so this is not the last one

So I take it that this is complete now. Would you like to start a new thread or have this one moved?

Well, the job is done, when it's on the database you can remove the thread of it, because i can't see the way to do it.

You can't remove the thread and there's no reason to. Either you start a new thread in the Fix/Mix forum and I archive this working thread, or I move this one to the Fix/Mix forum. Your choice.

Well, move it to the fix/mix forum;-)

Done. Please update the first post with additional info if you can.

Starting today on some editing of the remake of Book of the Dead
I have some new ideas and this one must be better than the first
Shorter, faster, and the Book have some past in this edit.
At the moment i recut the remake segment and i hope that everthing what's on my mind works in the new edit.
Update is coming up.

Today i finished a rough workprint of Book of the Dead


The cut is 1 hour and 47 minutes, and this is much shorter than the first one and i am very pleased with this one.
This cut is gonna be faster and with a lot more cuts.


I have to clean it up a bit and then start working on the music.


Like the first cut i use the music of the remake.

I've decided to put this remake in a 1.85.1 ratio
So there is no cropping in the original.
The first one was cropped to 2.35.1 but it did not work, and for this remake i don't like it
Blowing up the remake of 2013 to 1.85.1 is a better idea and this test is so much better as i see the workprint for now
if nothing goes wrong it will be ready next week.
You must log in or register to reply here.
Share:
Facebook Twitter Reddit Pinterest Tumblr WhatsApp Email Share Link
Top Bottom