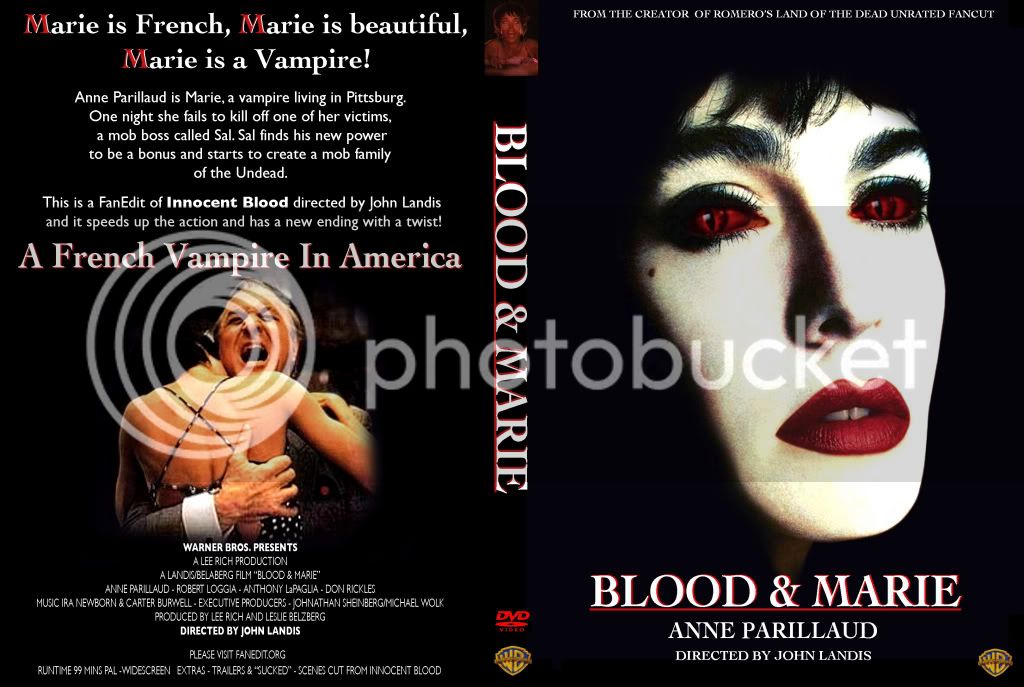 What is it about? This is a FanEdit of Innocent Blood directed by John Landis. A Beautiful French Vampire takes on the Pittsburgh Italian mob in this Gory Horror Comedy!

Tagline: She Will Suck You Dry!

Conceptual Improvements/Advancements Of Edit Over Original

What I have tried to do with this FanEdit is make a less sprawling and more focused version of Innocent blood. The film drags in places and there is some odd continuity. Also there are some harsh cuts that have been ironed out. The beginning has been changed and the ending has a new cold-blooded twist! I hope I have made a more succinct film but I will let you be the judge of that.

With the cuts and additions listed below, I have tried to make the character of Marie more mysterious, cold and manipulatory. Gennaro as less of an idiot.

1. New: Opening Title Music and partial credits
2. Cut: Opening scene of Marie naked in her apartment
3. Cut: Removed Marie's Narration completely
4. Cut: Tony's line "Somebody ain't getting up!"
5. Cut: Marie's line "Gee I'm sorry, don't hurt me! Ok?" after she is nearly his by Tony's Car
6. Cut: Marie's line "You can really move for someone so big!"
7. Cut: U.S. Attorney Sinclair line "No, you are not in trouble, Gennaro!"
8. Cut: Scene with Marie at Newspaper stand
9. Cut: Gennaro's line "After a while my wife thought I was a freak too!" and "She left you didn't she?"
10. Cut: Some of Marie's POV as she flies around inside the church
11. Cut: Gennaro using the dog to chase Marie
12. Cut: The scene where Marie attacks and threatens Gennaro on the roof
13. Cut: All reaction shots by the forensic Officer as Sallie once dead now alive runs by the press
14. Cut: The the lame gag "That's my car!"
15. Cut: Sallie's line "It must have healed!"
16. Cut: Expository scene with Marie and Gennaro inside wreaked car driving
17. Cut: Gennaro's expository explanation to his police buddies
18. Cut: Music when the mob try to put Gennaro in a dumpster and some shots and dialogue
19. Cut: Pistol flying to Gennaro's side at the right moment
20. Cut: Gennaro calling out "I want him alive!" as Marie shoots at Sallie
21. Cut: Some bloke watching the action so he can later say "Son of a bitch!"
22. Cut: "Ohhh...Ahhh...He shot me in the fucking foot....ahhhh...ohhhhh!"
23. Cut: Scene inside the car during chase when Marie explains that Sallie is a cold blooded killer and she is not. (Really bad scene ....egh!)
24. Cut: U.S. Attorney Sinclair talking to Manny as if he is coherent when he appears barely alive
25. Cut: Gennaro's line "Having a problem with that deep down clean?"
26. Cut: Gennaro semi fondling of Marie while she is asleep
27. Cut: Face touching and finger kissing in the car between Gennaro and Marie while they look for Sallie
28. Cut: The two cops doing a "Three Stooges" number before they bust in on Sallie at the strip club
29. Cut: Gennaro's mugging reaction at Marie breaking open a strip club door
30. Cut: Gennaro's mugging and line "Some Girl!" after Marie hits a guy with a baseball bat
31. Cut: Some shots of Marie with glowing eyes as they appear cross-eyed
32. Cut: Gennaro's "NO!" before he blows away his cop friend
33. Cut: Gennaro chasing after Marie and booking into a hotel with her
34. Cut: Credit Picture Montage
35. New: Ending with a twist!
36. New: End Credit Music and Partial Credits

Some scenes were moved to different locations for improved narrative flow and many more small cuts were made that are not listed.

New Opening Theme by Carter Burwell (I was aiming at a nod to The Blues Brothers).

The first issue to deal with was eradicating Marie's narration, which at some points was over dialogue, score and sound effects.

With the first meeting of Marie and Gennaro in the street; I tried to show that Marie can hear Gennaro's blood moving around inside his body.

The main sound changes were made during the car chases and action sequences as I felt the existing score needed to be removed. It was impossible to use any of the original sound as it is plain stereo with the score firmly embedded with the sound effects and mickey-mousing the action . So from 56 mins to 61 mins approx. the sound design is entirely new; gunshots, car tire screeches, footsteps, car doors opening & closing, engine noise, neck breaks, bodies being hit by car, ricochet hits, breathing, body falls, freeway sounds, car horns, Sallie's laugh and Sallie's skin burning. I tied this together by using a score by Carter Burwell, which I hope adds to the drama of those sequences.

All the neck breaks have been newly replaced to make them sound more brutal, sickening and bone snapping.

The syncing of Marie hitting a man in the face with a baseball bat has been corrected and some bone breaking has been added.

The final scene has a new score by Carter Burwell with new ambient sound and newspaper sound effects etc.

Thank you to boon23, AVP and ThrowgnCpr for your constant support and help. Also thank you to Akitsu for the advice and JokersMailBag for the keen eye. 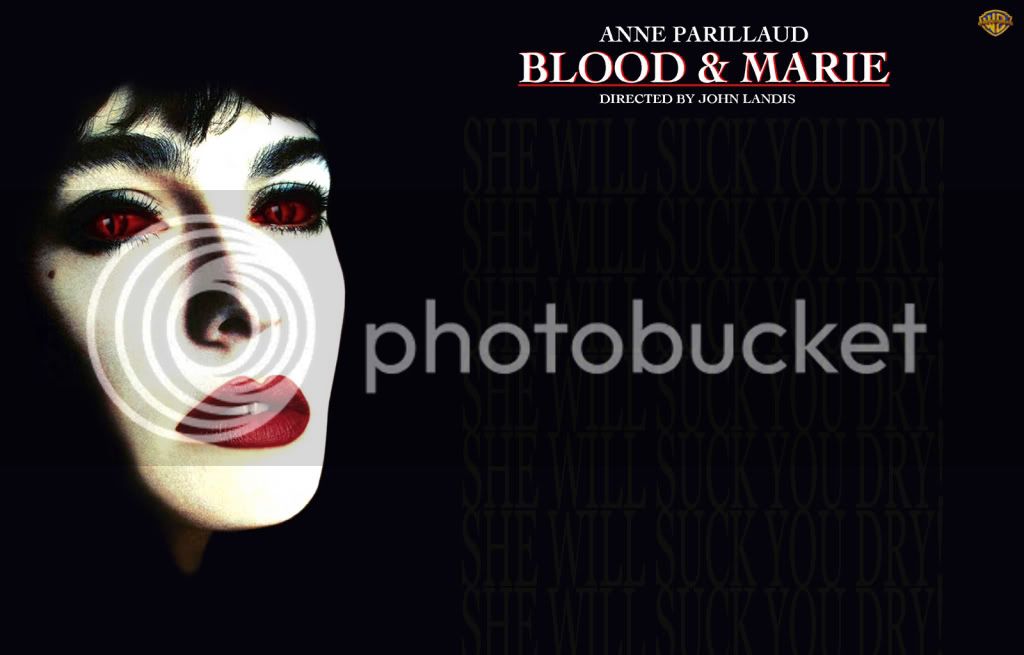 Great to see Rapidshare links right off the bat Nick. Sounds like a cool edit.

Actually, I enjoyed this edit and "Killer Horizon" both very much!!!
What's your next project slated to be?

Glad you enjoyed these FanEdits Jamie.

As for my next project?

Ludwig Van Beethoven, which is my dream project.

BTW, I absolutely LOVE how these last two releases have included a supplemental section with all of the cut scenes. You can more easily tell what has been altered without having to watch the entire original version again to try to figure out what's different. I recommend this for just about any true fan edit out there, as sometimes it's not easy to spot all the visual changes right away.

Thanks for your comment on Blood & Marie. I sort of cornered myself by stating I would do a FanEdit of this movie without having seen it! :shock:

I thought the movie was a great disappointment and you are right my version is one too. Most of the work was new sound design and of course the new ending with the twist.
A

As for my next project?

Ludwig Van Beethoven, which is my dream project.

I get a "requested topic does not exist" with this link.

yes, it hasn't been updated or viewed in months and has as that expired.

does that mean it was deleted? I was actually looking for a topic I started a long time ago but couldn't locate it. Does a forum topic get deleted after so long if it hasnt been posted in?

yes, fanedit ideas and fanedits in the works are set to auto-prune if a post has not been viewed in 90 days.

well, this was in the music section, but I assume its the same...

indeed, the music section is set to auto prune after 90 days without a read or post.