^ Indeed! The Holden VK scene is complete (and the intro leading to it), so here it is matched very closely (IMO) to the 1999 DVD:

It's great to have this scene in HD, back to the way I remember it. Smoky and atmospheric and not green and drastically over brightened. Again here is the Final Cut grade for comparison:

This really is one of the highlights of my year. ..congratulations

^ @"Last Impressions", as a general reminder please try not to quote the entire post if it's only a few posts away and the main source of attention. It's a lot to scroll through.

To get back on topic, impressive job! I haven't seen Blade Runner, but I'll probably take a look at this sometime in the future.

Love the creepy way Krennic says that line.. and thanks all.

Noodle bar scene is done and so is the Spinner ride from the bar to Bryant's office:

Some shots are pretty darn different:

On to Leon apartment scene now, with Rachel VK all done (regrade on RHS):

This is the furthest I've ever got.

TM2YC, I've been following your progress on this excellent project for a while now.  As someone who was lucky enough to catch BLADE RUNNER during it's original theatrical run, I look forward to your efforts on this.

I've rewatched the likes of the DC DVD over the years, and it's warmer, more naturalistic colourisation is so seared into my head, that I find the look of the FC strangely unwatchable in comparison.  I've tried adjusting to it, but it just grinds my gears every time.

The colour regrade won't bother future generations who see it of course, as that will likely be their first exposure to the movie.  But I recall looking forward to the Final Cut being released years ago, only to be sorely disappointed with it's totally 'stylised' re-colouration.

I'd much prefer to see it look closer to the previous DC's look, as your comparisons show.  As an example, the colours of the neon pop much more in the previous DC release than they do in the FC version, and so I'm hoping you can work a little magic to brighten up the new 'Zhora' FC shots somewhat too.

Either way, I really dislike the trend of re-colouring what were already great-looking movies for their HD releases, and wish Ridley hadn't been one of the worst perpetrators of that.  So if you can also get around to undoing his ALIEN regrade one day too, then I'd be doubly obliged!

ImperialFighter said:
I'm hoping you can work a little magic to brighten up the new 'Zhora' FC shots somewhat too.
Click to expand...

Yep, my intention is to regrade the DC blu-ray and then add in shots (or parts of shots) from the 'Final Cut' to make a FC synced version. I'll use it to mask in wire-removals and stuff like Zhora's face.

Apart from growing up with the DC VHS and DVD, I also sunk a lot of hours into the superb 90s PC game and that featured lovingly recreated FX shots with the warmer grade, which further fixed it in my mind: 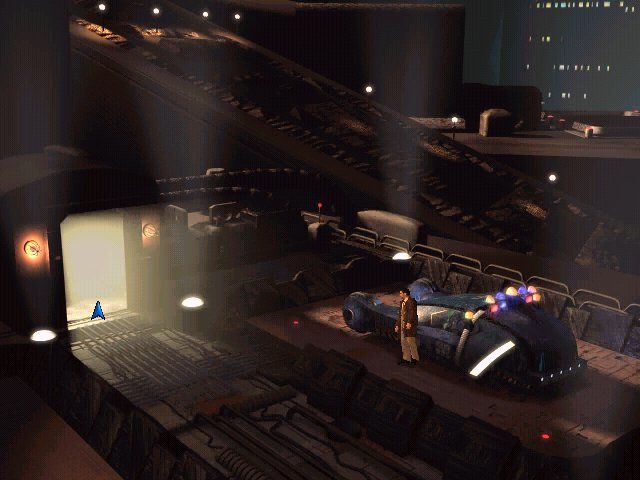 Having said that, in some parts (like the Rachel VK) I'm having to make them cooler.

Leon's apartment is shockingly over-brightened and blue on the DC blu-ray (nevermind the Final Cut):

So will your version use father or will it use f*cker? I'm hoping for the latter.

skyled said:
So will your version use father or will it use f*cker? I'm hoping for the latter.
Click to expand...

The Final Cut uses "Father" right? I much prefer that, it's got a tone of barely suppressed anger, the other just has anger. Googled it:

I mentioned this in another thread, but I actually prefer the broadcast version. Fucker seems over the top and father seems like something froma script.

I prefer the f*cker one best because the audio actually seems like a blend of him saying father and f*cker at once. At least it does to me.

Chew's Eye-World is taking some time. As it's a "cold" scene, perhaps predictably, the blues have been taken to crazy levels. With some heavy manipulation the original colours are still in there, including the red of the gross looking eyeball. A frame comparison:

The Chew scene is now done. It was quite tricky to get right as beneath the uniform blue tint there are were many subtle levels of shadow, smoke and different coloured light sources to reproduce for each shot. I'm very pleased with the result.

A not very high quality upload of the scene from youtube for comparison: