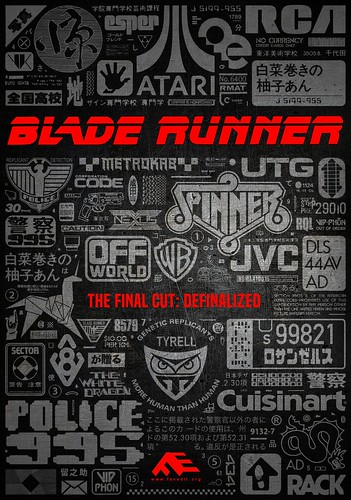 'Blade Runner' is one of my favourite films ever since I got the 'Director's Cut' VHS in 1992 (I think it might have been the first "widescreen" film I owned?). But I just can't bring myself to watch it anymore because the colours on 'The Final Cut' are so messed up that it's unbearable for me and knowing it's available in HD means I can't enjoy it in any resolution below that from the older "correct" releases. Also I primarily want to watch the superior FC version with all the subtle fixes, not the various older cuts.

So for the past year or more I've been experimenting with 'Regrading' the FC. At first I thought it might be impossible to fix as the colours are just so crazy. But I kept going back to it every few days and trying new things, sometimes getting closer, sometimes getting further away. I bought a copy of the 'Director's Cut' on DVD, the original DVD, not the current DVD that also has the FC colours. I used that to compare and also brought in the workprint as a comparison.

Finally last week I think I hit on a preset that fixes all the problems for most of the film. Of course it will need adjust scene-by-scene and then shot-by-shot but for most shots it's pretty close. Here is a few minutes from the start of 'Blade Runner' with the new grade...

I'll post some comparison screenshots soon. In the meantime here is a teaser poster (With a nod to the source novel)...

Right now I'm intending to release this as a high-quality Blu-Ray compatible MKV, including all the audio tracks from the official disc. But I may also try to sync up the other commentaries and audio tracks including the voiceover to make an ultimate package.

(Mega thanks to Captain Khajiit for helping me get a lossless source file together from the annoying VC-1 encoded Blu-Ray).

Looks fantastic! I can't wait for this to be completed!
N

I think this fan edit reflects how much color timing has become foregrounded in the age of multiple editions/transfers.

There have been numerous debates, as to which color timing for Blade Runner is the "proper" or "best" since the release of the Final Cut set. (This thread is a good one for that discussion:http://originaltrilogy.com/topic/Blade-Runner-color-timing/id/14095)

What seems to be consistent is that many people find the Final Cut digital coloring to be too modern or retro and view the 1990s DVD edition to have more proper 80s colors. But then, there is also the view that the transfer on the DC DVD is pretty awful.

Honestly, I have no idea, as to which color grade for BR is the original one, as I have never seen the original cut in theaters, nor did I pay attention to the coloring of the various releases until the Final Cut came out.

Does anybody know for sure that Ridley supervised the grading on the Final Cut version?

Looking forward to this! The Final Cut is my go-to version, but the modern colour grading does irk.
N

That's been the official word in pretty much every major press release of the Final Cut, so I think it's safe to say yes.

It wouldn't be the first time a director decided to recolorize his movie - the original Matrix was overhauled when it was re-released on DVD in the trilogy box set.

I think he did, if I recall correctly.

Here is a comparison as promissed. I'm really pleased wth this shot, as you'll notice on left that the glowing computer text now actually glows and stands out from the foggy light in the room as it should and not just teal text, on a teal background as in the Blu-Ray original...

Forgive me, I'm a bit color blind, which is which? Is the top Blu Ray and the bottom color regraded?

The top one has been regraded. The bottom is what the Final Cut looks like.

As Beezo said. Whoops I should have mentioned that (Post updated).

Here is another shot from the start of Gaffe's first scene. Regrade on left. Blu-Ray on right:

It's over a year since I archived this thread to concentrate on other projects but I've been tinkering with the grade from time to time all that time. Whenever I thought I'd got a little better at grading, I'd have another go and then give up when I realised I still wasn't there yet. But recently I've started again from scratch I think I'm finally getting it the way I want.

The goal isn't to exactly match the 'Director's Cut' grade but to use it as inspiration and reference for how this movie should look. The first twenty minutes are almost complete and here is a sample from Deckard's first meeting with Rachel...


...and somebody kindly uploaded the DC DVD graded scene (I think mine is pretty close)...

Wonderful, I can’t wait to see it!

A few shots still a bit off, but the Final Cut regrade is really dodgy and inconsistent in places. Nice work

I very much like your result of Leon interrogation scene. It has a kind of North by Northwest Technicolor flavor. This will look even better than Criterion laserdisc regrade of FC that's been circling around.

Blade Runner is one of my favourite films of all time, looking forward to this regrade ^_^

I felt the Leon scene looked lightyears better and the Deckard comparison shot looks great too.

ThrowgnCpr said:
A few shots still a bit off, but the Final Cut regrade is really dodgy and inconsistent in places. Nice work
Click to expand...

Yep. I plan on going back and tweaking here an there at a future date.

Here is the next portion of the VK scene...

I've discovered that there is nothing better than listening to Kraftwerk real loud, when regrading Blade Runner .

Is that a slight aspect change/zoom at 41-42 second mark?

No. Not really sure what you are referring to?

No. Not really sure what you are referring to?
Click to expand...

Weird, I re-watched it several times before I posted and each time at that timestamp the picture did a little aspect adjustment/zoom, but I just watched again and it's not there. Maybe a Vimeo playback issue or something.