Batman vs Superman (BD5 AND DVD-R) 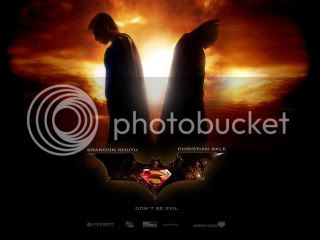 This is a short clip from a new fan-edit I'm doing called Batman vs Superman. It combines Batman Begins and Superman Returns into a 30-45 minute mash-up ass-kicking contest.

After long absences, both Bruce Wayne and Clark Kent have returned to their home of...Gothtropolis (Metrotham City?), and attempt to put their lives back together. Most everyone is excited to see them home again, except their former girlfriends. The less than warm home-coming from their lost loves forces both the Man of Steel and the Dark Knight into a deadly spiral that threatens to destroy the two heroes, and plunge the world into chaos.

When eventually completed, the film will be in 720p high definition resolution, with a new 5.1 soundtrack. This 4-5 minutes took about a week to get together properly, so don't expect the finished product anytime soon, but it definitely has been a real joy to play around with. You might notice the lack of music. I hope to change that :smile: , if anyone would like to contribute in some way to a new score, I'd like to open discussion for it in this thread. I know we've got some aspiring musicians out there, and one or two electronic composers. I suppose this'll be a chance to strut some stuff

This looks great...look forward to this!
T

Interesting. Would love to see where you can take this.
S

Suggestion for the ending:


this looks superb so far - and its almost a fanedit making an unmade film!!!! this should be good

i am actually downloading year one as i type at home so that should be good. is there any chance of a 'the dark knight' torrent please?

Hey thanks. I was surprised today to find my Dark Knight torrent is still well seeded at demonoid (just as surprised to find out that demonoid is officially back). Search "Dark Knight (Forever Re-edit). I should still have an invite code if you need one.

Wow, this project has massive potential. Could be one of the greats. Hope everything goes smoothly for you, Paul.

This was just a quick update to let people know this project is still going strong. I ran into a bit of a hole when my speakers blew out and audio editing was stalled for some time. A few weeks ago, I bought a brand new 5.1 sound system for my computer, and was able to continue work on the edit. I've all but completed the second of three "difficult sequences", in which a foiled bank robbery threatens to destroy the city. The third sequence is a showdown at the Fortress of Solitude, which still needs extensive work in audio, video, and simple editing, but it is planned out and almost ready to rock.

Though, due to a recent breakthrough in the work I've been doing on Star Wars, this edit has gone on the back burner for a little bit. What's completed so far is great, and the rest is a bit far off in coming, but it'll all kickass in the end.

Pretty good news all around, then. Too bad about the old speakers, but nice you were able to get new ones. How do you like them?

I've been following your Vintage Edition thread as well, and I haven't seen anything about a breakthrough. (last post there was by me, actually, on May 20th) If it's not something you want to keep a surprise or whatever, can you elaborate a bit?
S

How's this going? Looking forward to it, finally a fan edit done in HD!

SwordStone said:
How's this going? Looking forward to it, finally a fan edit done in HD!
Click to expand...

There was already one done on HD-DVD. If that's what you're getting at.
J

Wow, looks great. I cannot wait to see the end result of this.

Interesting.. About how long will it run?

The .mkv I just encoded runs at about 35 minutes. I can definitely say the edit is completed, but I really should take another look at it to make sure I like everything. The release specs will now consist of a standard definition DVD release on one disc, and the main BD-5 release in 720p on the second. Both will contain the main brand new 5.1 surround track, as well as an isolated FX track for selected scenes, to showcase some of the new sound track building that was required. I will release them simultaneously so only one torrent needs to be seeded. I'll check out the .mkv tomorrow and see how everything went.

One issue that set the edit back a little bit came up during the test discs I made. There was a particular scene where nobody really got what I was "going for" with one of the edits. I've fleshed it out a bit more, so it should convey what I was trying to show now. Whatever, we'll see I suppose. I would definitely say I'm happy with what I've done so far. It's not too hard to suspend your disbelief and treat it like a real story by itself. Hope you all enjoy it when it is finally released.

PaulisDead2221 said:
Hope you all enjoy it when it is finally released.
Click to expand...

I have no doubts in that regard. Congrats, Paul!
J

How is this coming along Paul? I am psyched and have been ever since I found out about a month back ago.

I believe this edit is officially completed. I figured out a little audio sync issue which pushed it back a little. Right now I'm burning what I believe to be a BD5 of Batman vs Superman. This is the first blu-ray I've ever authored, and I don't have a blu-ray player or PS3 to test it on, so I'm taking it in to a couple retail stores tomorrow to see if I've done everything right. The DVD version is already encoded, and just needs to be compiled. I'm pretty sure this bad boy is gonna be out tomorrow. :-D I hope it was worth the wait.

Oh yeah, and there's no official cover art yet, so if anyone is interested, these are the BD/DVD specs:

Can't wait to check out the finished product!