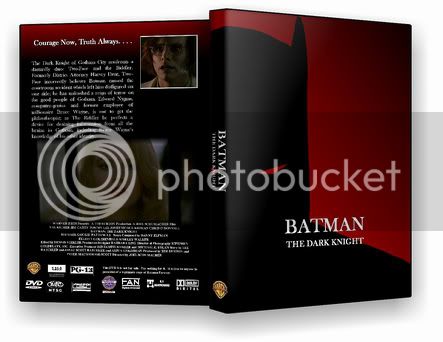 
This was an edit I'd been meaning to give a try for a long time now. Inspiration came from the elusive Batman Forever (Dark Knight Edition) which has proven quite difficult to attain by the forums. I spent two or three sleepless nights working on the film. The goal of this edit was to strip away the over-the-top approach Schumacher took to his two installments in the franchise. The story has been tightened to burn off the omens throughout the film foreshadowing the fast approach of the asinine Batman and Robin.

Stylistically, the color has been greatly desaturated, the shadows have been emphasized, and high tones diminished. The entire film has been darkened just a little bit, and the aspect ratio has been cropped to appear wider.

The beginning of the film is reassembled to open up at Wayne Enterprises, where Bruce Wayne meets Edward Nigma. In the midst of the conversation, Bruce notices the Bat signal outside, dismisses himself, and visits Two-Face at the bank heist. After the Statue of Liberty sequence, the film continues with the Murder of Stickly, and the film progresses as normal, with over 40 minutes of cuts along the way. There is no longer a love triangle between Bruce Wayne, Chase Meridian, and Batman. Edward Nigma's character, though not as calm and calculating as he is portrayed in every other manifestation throughout the franchise (except the Adam West version of course), has been trimmed to kill the more "Jim Carey" moments. The city of Gotham has been toned down greatly, with the black light sequences cut, and generally just being greatly pushed out of sight whenever possible.

The musical score has been completely revamped. Though not the intention to completely abrogate Goldenthal's score, Mostly cut out is the revamped Batman Forever Bat Theme, replacing it with Elfman's theme. Goldenthal's score has been left alone in the development sections, as it mostly isn't bothersome or cheesy. Action sequences have been sourced mostly from Danny Elfman's themes from the original Batman, and Shirley Walker's score from Batman: Mask of the Phantasm. A Khachaturian Ballet Suite is utilized as a theme throughout the film. A Prince song also enjoys a short cameo, a nod to the original film.

Generally I'm proud of the end result. I've taken quite a shine to the Dark Knight recently, and this was a real interesting project to work with. The disc is assembled and uploaded to demonoid. I would have liked to put some extras on the disc--including an animated menu, but I kept running into errors with encoding the trailer and proposed menu, so though bare bones, this is a pretty neat disc. Includes two audio mixes, surround and stereo, with a pretty high bit-rate due to the greatly shortened length of the video.

sounds like a cool edit. will give this a look
L

when it's ready, give me a sign and I will download it. I actually enjoyed Batman Forever in theatres, but now with the DVD, I'm still doubting.

congratulations on finishing, PID. I am on it.
M

Is there possibly a .avi version coming at some point?
C

How do you download from Demonoid? Do you have to register? I really want this one.
B

PaulisDead2221, I look forward to seeing it. I also have planned a re-edit of the film, myself, so I'm quite eagerly awaiting to do it.

man, this looks really cool, is there a avi version coming though? 4gb is a bit to big for me.
R

Hopefully somebody can seed this..

it is well seeded.

anybody done some cover art for this?

EDIT: This is well seeded indeed. Lots of people grabbing this. I am seeding it at 1200kb/s. cool!!
R

Yes I can see that it is being seeded now. I'm excited cannot wait to watch it.

ThrowgnCpr said:
anybody done some cover art for this?

EDIT: This is well seeded indeed. Lots of people grabbing this. I am seeding it at 1200kb/s. cool!!
Click to expand...

none yet I'm afraid. Problem is there's like...one poster for it, a teaser poster with the bat signal and a big question mark, some cheesy character posters, and a comic book adaptation cover. That's it. To get together something real unique, you have to get pretty creative.
S

Sounds interesting, last time i watched Forever it left me disappointed since i remembered really liking it. I'm looking forward to checking this out.
J

it does feel a tad rushed in the scene with bruce and chase at wayne manor (the kiss), but i think that is due to the love triangle being cut (when she kisses him and does her lois lane impression).

^ that was really the only time i was taken out of the movie by something feeling strange and it is EASILY an improvement on the original.

well, for me this was not really much of an improvement over from what I remembered from the original movie. The fanedit may be a lot better, but I still didn't get entertainment from it. I hate Jim Carrey in this movie and I don't like Val Kilmer as Batman and that Robin dude... jeez... The entire movie is infected with a terrible score, overacting and lame jokes and dialogues. Sorry.
my list of best batman movies:
Batman Begins
Batman Returns
Batman
(and all the rest is still not worth being mentioned)

Hey don't forget Mask of the Phantasm. That's gotta go somewhere on the worth mentioning list .

Actually I really like Val Kilmer in the movie. He's got the quiet cold sensitivity that Bruce Wayne needs, and in a better movie surrounding I really think he could have flourished. Maybe I'm still swooning over his portrayal of Jim Morrison, maybe I'm still distraught over George Clooney's mess of a performance, I dunno. Two-Face's performance is the mess that kills me. I remember when I was seven thinking he was the fucking shit, then I actually look back on the movie and he is the Riddler's bitch! It's especially apparent with his cutaway shots during the showdown, just kinda laughing or chuckling along with the Riddler's schemes (that's one reason I re-assigned top billing for Jim Carey to go above Jones').

When it comes to the Riddler, yes Jim Carey is annoying, but I tried a new perspective. When you try to make the film more serious, and in a more serious surrounding, and with the parts that make it feel REALLY like Jim Carey gone, does maybe his performance come off...a little gay? Like seriously gay? Yes! In my edit The Riddler is clearly gay, and not because Jim Carey was allowed to make a bunch of puns who have their place in the movie Liar Liar, but because Edward Nigma had some clear homo-erotic issues he was dealing with, just look at the chair he was sitting in during the showdown.

Well, seriously I was happy with the ways I could stretch my editing muscle with this film. Anybody know how hard it is to replace a score? I enjoyed syncing up various pieces from quality sources (Batman: Animated Series, and the better films), and I enjoyed making characters do things they weren't normally doing (notice Chase turns off the added Prince music when she's talking to Bruce in that second she's off screen?). I watched a beta edit with a friend, and all we did (we watch a lot of fan-edits) was talk about better stuff we could be watching.

So I agree, kinda. I intentionally released no specific edit-lists because I wanted people to go in fresh, figured the trailer and a brief overview would do most of the hooking. Give it another look in its original form, I think you'll be sadly surprised at exactly how much was changed.