Back to the Future -The Hill Valley Chronicles Miniseries 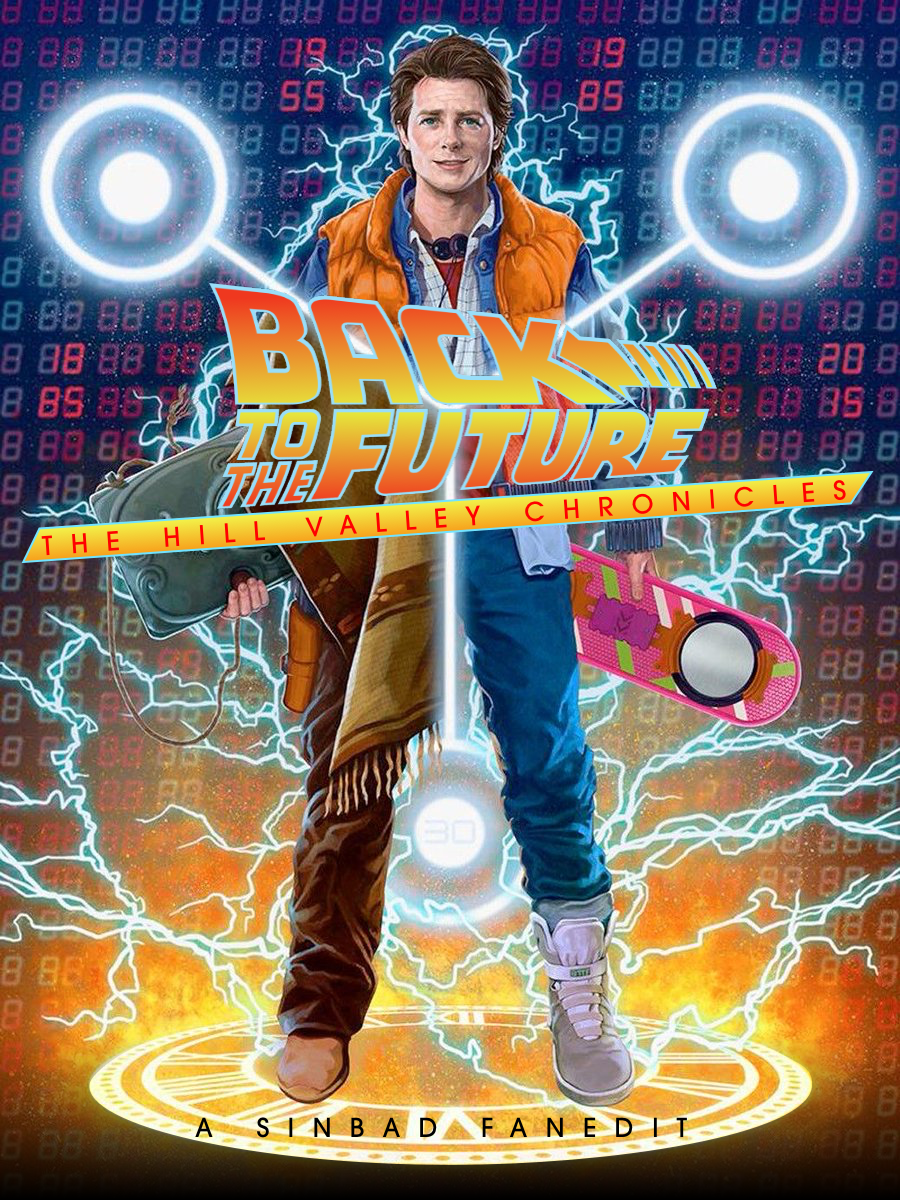 Synopsis:
The Hill Valley Chronicles takes the enormously popular Back To The Future Trilogy and adapts it to a 'Quantum Leap' style 30 minute teatime TV show comprising of ten episodes. This new adaptation puts a fresh spin on the trilogy by reshaping the narrative so that all the parallel events of November 12 1955 in the trilogy collide with each other.

Intention:
The primary purpose of the edit was to manipulate the events of BTTF1 to allow the 1955 scenes in BTTF1 to run chronologically parallel to the 1955 scenes in BTTF2 seeing how November 12 1955 played out the second time round with two Marty’s and two Doc Browns inhabiting Hill Valley.
I also think the movies fit the ‘teatime sci-fi tvshow’ format well so a lot of work went into creating the previously, intro titles, end titles and ‘next time’ teaser for each episode ending on a cliff hanger where possible.

Alternate Episodes
Episode 01 Pilot Style Opening
Episode 10 Back To Reality?
A homage to Back To The Future:The Reality Cut

Other Sources:
Back To the Future 1 and 3 OST
Trivia for Mary Steenburgen fans some audio effects used in her 1979 time travel movie with Malcolm Mcdowell 'Time After Time' were used in one of the episodes.

Good luck. My edit that combines parts 2 and 3 clocks in at 2 hours and 40 minutes.

Well, you could play the original movie and then when Marty is being chased after Doc is shot, flash all the possibilities in fast forward and have the Lybian's blow up the Delorean. That would clock in much lower than 3 hours.

Put a very rough experimental cut together last night, of the 1955 parts and decided just to use parts 1 and 2, I am planning to edit so Doc Brown is sent back to 1985 instead of 1885 when the lightning hits the delorean in part 2 and it will conclude with Marty 1 going back to 1985's original timeline and MArty 2 being trapped in 1955 with young Doc Brown. It's actually highlighted the fact that had everything gone to plan in BTTF2, Marty 2 would have been unable to go back to the 1985 Marty 1 went back to. Assuming the timeline wasn't altered by Marty 2's actions in BTTF2 there would have been two Marty Mcflys in 1985 if he had simply gone back with Doc after retrieving the almanac.

This all sounds very intriguing!

I'm not sure how you can cut all the 1955 scenes and still have everything make sense, though. In the second movie, I can see you cutting around that, but the bulk of the first movie (and some of the best scenes in the trilogy) happened there.

It looks like you tried to explain it more in your second post, but I'm still confused. Maybe it's my own fault for being a bit tired today.  Maybe once you show us some preview clips, I'll have a better idea of what you're going for.

Yes I've run into a few issues with the 1955 scenes, theres a lot to juggle when george punchs biff, marty 2 attempting to pinch the almanac from Strickland, marty 1 being locked in the trunk of the bands car, the band threatening Biff cohorts , Ive managed to cut it without any scene feeling too much like its on pause till we return. I have for instance had to use the george biff knockout punch from BTTF2 rather than the more dramatic one in BTTF1 so it would lose something for a first time viewer. Narratively I feel its working but it definitely plays better to someone already familiar with the original films which lets face it is just about everyone...

This now belongs in ITW since you're actively working on it.  However, as an unapproved editor you are only allowed two active projects at a time and this is your third.  Please pick one of the three to be archived until you get an edit approved.

This now belongs in ITW since you're actively working on it.  However, as an unapproved editor you are only allowed two active projects at a time and this is your third.  Please pick one of the three to be archived until you get an edit approved.
Click to expand...

Can you archive the terminator one please, that finished but I took a look at Maniac's Judgment Day and don't think my version really offers anything new that he hadn't already achieved.

A first draft of the edit is done now a little refining still needed here and there (titles etc), if anyone wants to take a look they can send me a PM, I'm open to constructive crticism and ideas for changes.

Update on the narrative stucture of the edit

Follows the events of Back to the future up to the point Marty goes back in the delorean to 1955
instead of him crashing into the barn he awakes believing the events of BTTF1 in 1955 to be a dream
Marty then see his family life has completly changed as a result of George knocking out Biff 30 years ago
It then follows the events of BTTF2 as Marty goes with doc to the future to sort his kids as he realises his 1955 time travel was not a dream
At the point Marty returns with doc to 1955 to solve the almanac problem both 1955 sequences play out chronologically
The under the sea dance scenes intercuts between the events of 1955 in both movies
The delorean/lightning finale from BTTF1 and Hoverboard Finale from BTTF2 playout intercut as though taking place at the same time also.
Marty returns to the new 1985 timeline with Biff under George Mcfly's thumb and how Doc survived the Libiyans attack is revealed
Current Running time 183 mins

This edit is finished now, could I possibly get it moved to the pending approval section?

This edit is finished now, could I possibly get it moved to the pending approval section?
Click to expand...

Have you sent a PM to DominicCobb?

Why a couple and not just one succinct message?

addiesin said:
Why a couple and not just one succinct message?
Click to expand...

Because I sent one and never got a reply did give it a couple of days between each one.

addiesin said:
Why a couple and not just one succinct message?
Click to expand...

Because I sent one and never got a reply did give it a couple of days between each one.
Click to expand...

How many did you send? In no case is it more helpful to send more than one.

2 (two days apart) I would hardly call that spamming

Oh. I wouldn't recommend sending more. So you know, one PM already gives someone a minimum of 3 notifications, 1 is an email, 1 is an "Alert" on the site, and 1 is a big red bar that shows up at the top of the site telling you that you have a PM. You've given him 6 different notifications about one edit in two days. I never said the word spam, you did.
You must log in or register to reply here.
Share:
Facebook Twitter Reddit Pinterest Tumblr WhatsApp Email Share Link
Top Bottom