Babylon 5: The Lost Tales - To Live and Die in Starlight

Here is G'Kar's last tale. His performance is thoroughly enjoyable. As always. Originally much in Legend of the Rangers detracted from G'Kar's adventure. Not anymore. Now you can enjoy your favorite Narn in a solid story of exploration, intrigue, and humor.

Legend of the Rangers: To Live and Die in Starlight is a TV movie intended as the pilot for a new TV series, which was never made. The characters that would've been the regulars in the series get lots of screen time, lots of opportunity for the viewer to become emotionally invested. Not only in the Rangers as a group, but in these specific individuals.
Both G'Kar and the organization of the Rangers connect this new storyline and the new characters to the established Babylon 5 universe.
The series was never made, making this movie an orphan in the B5 universe. The investment in the new characters does not get a pay-off because there are no later episodes.

GOAL
To Live and Die in Starlight is refocused as an episode in the Lost Tales series. G'Kar takes on a mission to help the Rangers investigate an agressive unknown race. They are the main protagonists, while the new Rangers are mostly relegated from "individuals" to "crew".

CUT
- Opening scene where Martell keeps the crew alive.
- Kendo practice. No more bickering between Martell and Tannier.
- The naming of names ceremony. Fun idea, but it took too long, sounded like an opening session of D&D newbies, and we're just not that interested in the individual crew members anymore.
- Inside the weapons control chamber. All of it.
- The mines attack on the Liandra. It's an interesting new weapon but it made the battle drag on too long, and after cutting the weapons chamber shots there weren't enough cutaway shots left to keep this flowing seamlessly.
- Lots and lots of small trims for pacing.
- Shifted G'Kar with imposter G'Kar to later in the story, where it fits more logically.

DVD (PAL 16:9 anamorphic)
Stereo
English subtitles
Run time: probably 57 minutes (29 cut). That doesn't match anything else in the B5 universe, but neither does the Lost Tales runtime (neither as one nor as two parts). Ultimately this makes for the best story.

Lots of audio transitions still to clean up. This movie was only released in stereo, making it harder to separate dialog from SFX and music. Sigh.

Count me in on this one!

Sounds like a great one to me! I think Legend of the Rangers might have had something going for it (if it did, indeed, involve the Thirdspace aliens) but the execution was very, very poor. Curious to see this play out more as a Lost Tale! Will you be using the introduction from Lost Tales too?
D

I am looking forward to this too!   When this pilot movie came out, being a huge B5 fan, I tried to convince myself I really liked it.   But I couldn't stay in that mindset.   To me it was a missed opportunity with some really cringe worth moments.   And so glad to hear you cutting the weapons chamber, which if I remember was all that awkward floating, yelling and fist shooting.   I get and can like the concept, but the whole thing gave me second hand embarrassment.     And again, I say that as a person that loved B5!

Here's draft #1 for the cover art. What do you think?

The front shows the three key components of the story: G'Kar, spaceship Liandra, and baddies The Hand.
The back shows Beta Durani 7 (an unused painting by Chris Wren, conceptual artist on Legend of the Rangers) with The Hand ships in the foreground.

The "floating" pyramid ends rather abruptly at the bottom. I didn't see a smooth way out of that. Suggestions for improvement are welcome! 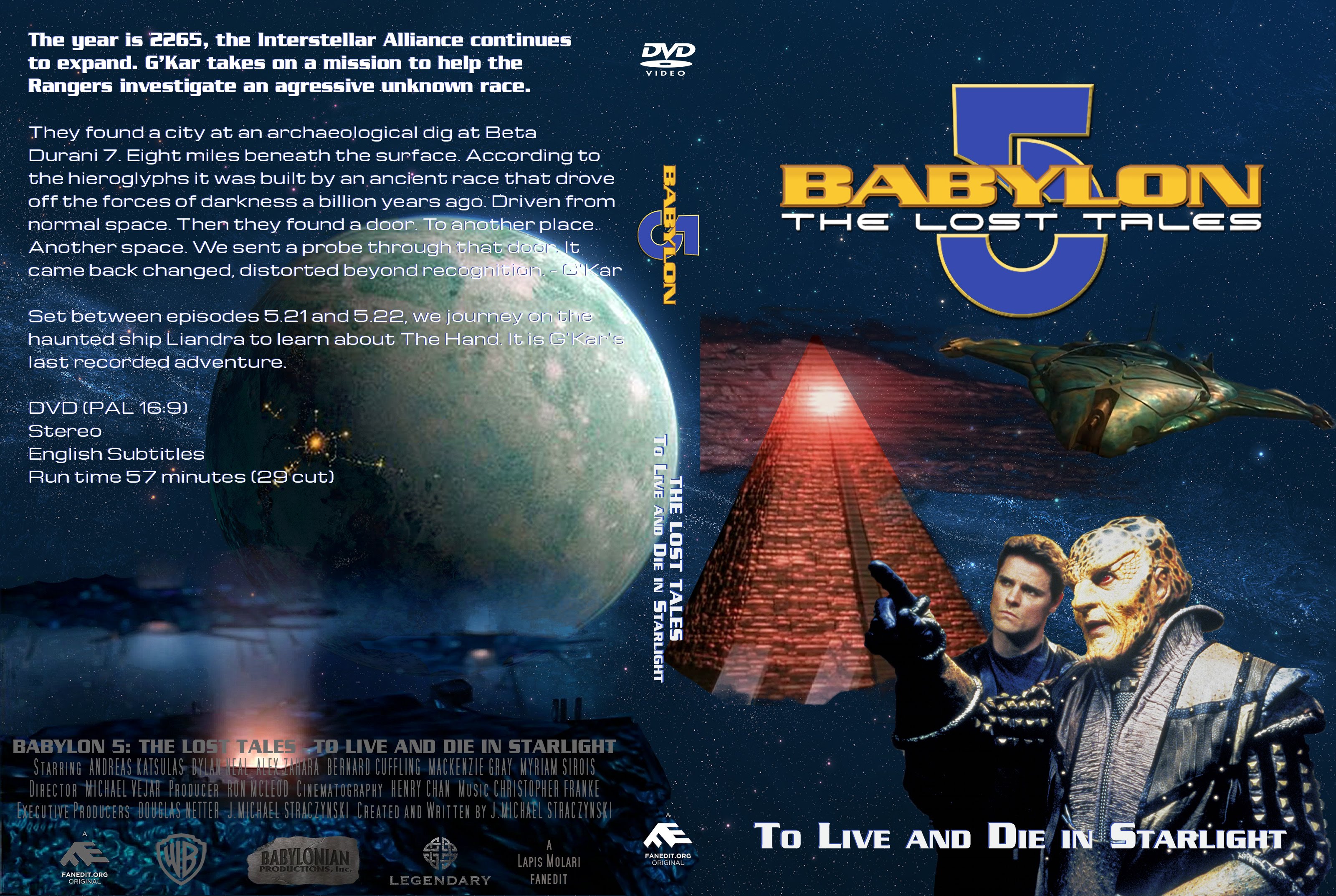 Version 2 for the cover. The floating objects on the previous cover kept bugging me. This looks calmer and more coherent. And the back cover is easier to read now.
Below that Version 3, for those B5 fans who own the German superbox. My son wears my Psi Corps baseball cap! 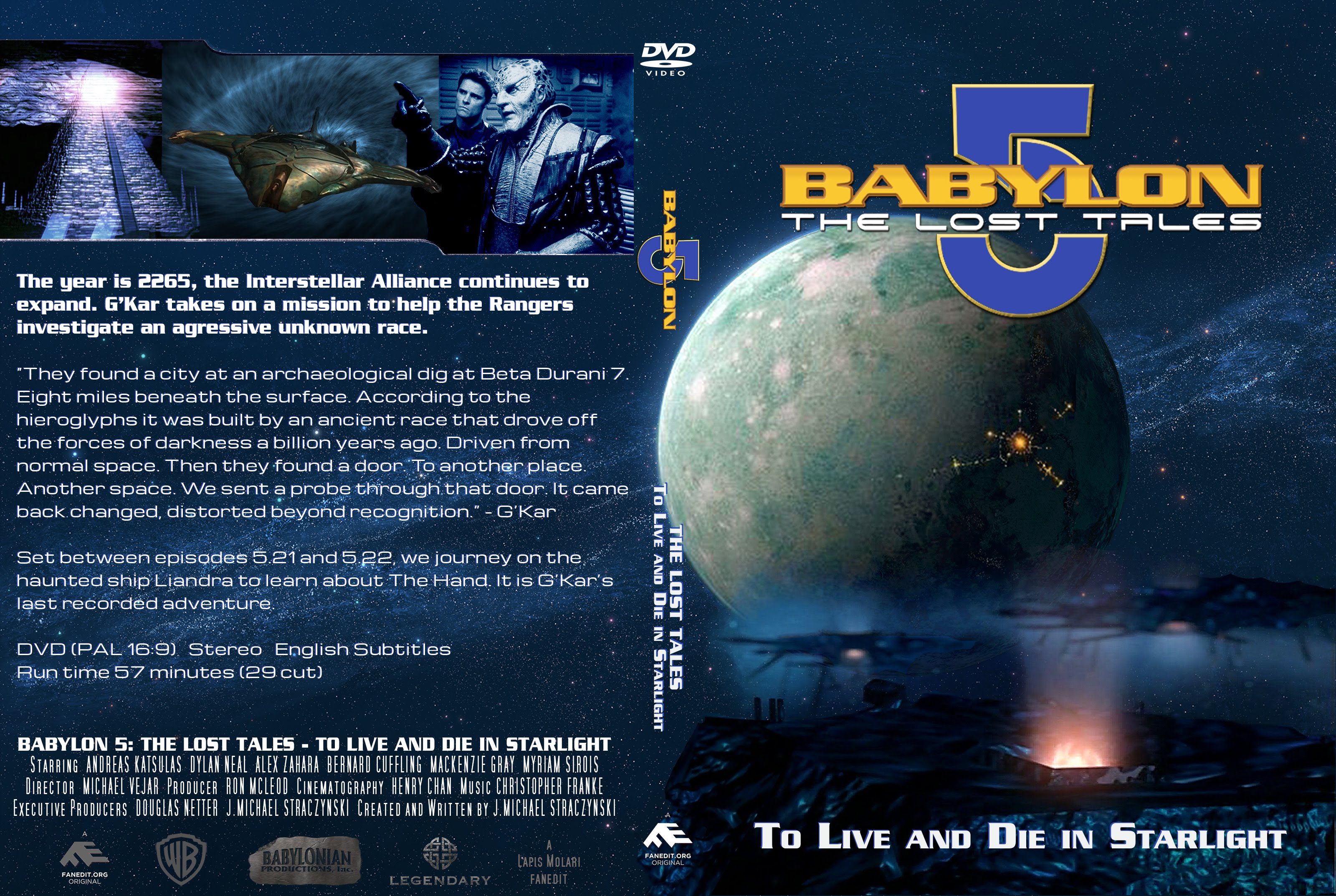 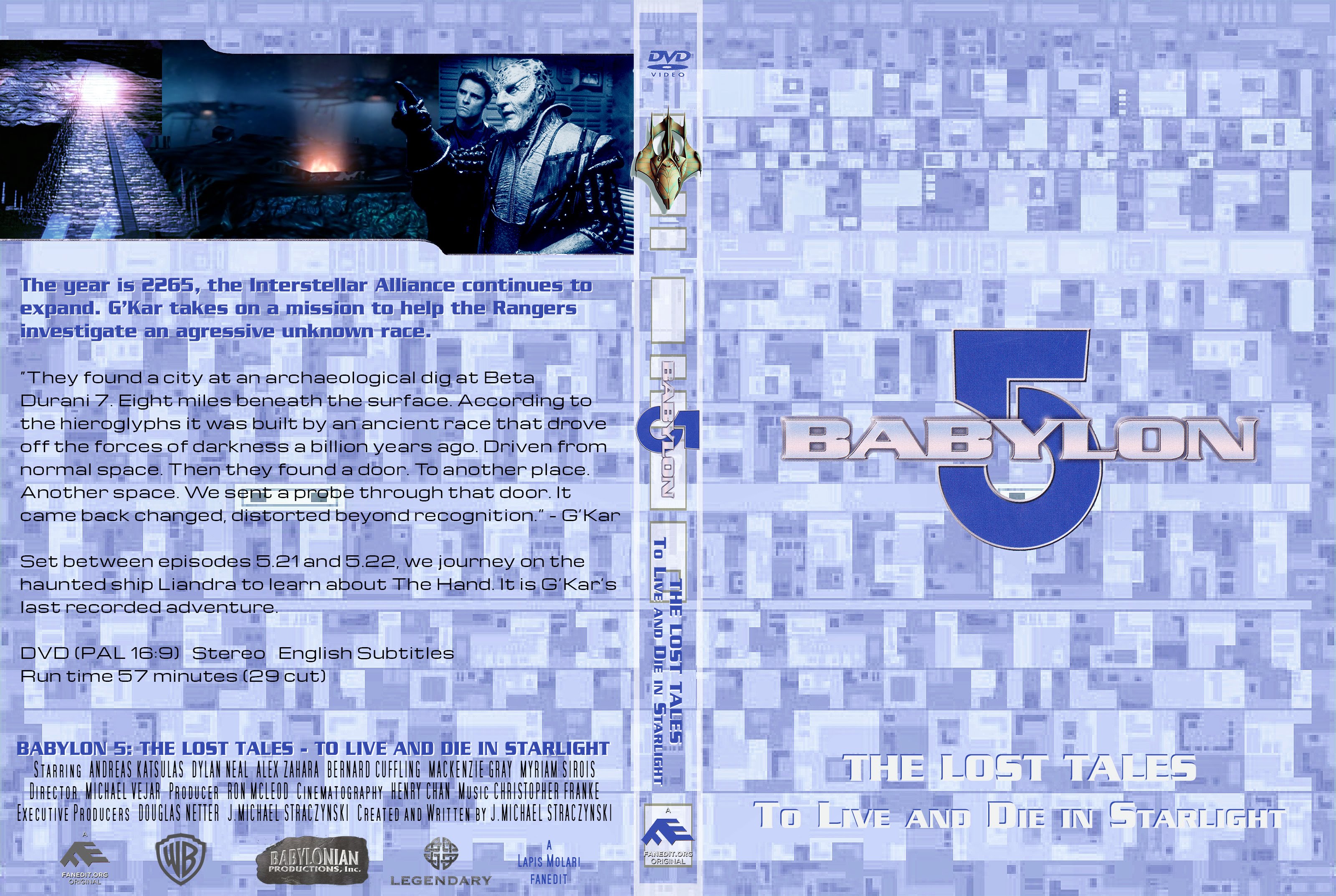 Thanks @"GelflingHand" for your feedback.

lapis molari said:
Version 2 for the cover. The floating objects on the previous cover kept bugging me. This looks calmer and more coherent. And the back cover is easier to read now.
Click to expand...

Nice work! Maybe desaturate the Liandra on the back to match the other images, and put quote marks around the G'Kar quote?

GelflingHand said:
Nice work! Maybe desaturate the Liandra on the back to match the other images, and put quote marks around the G'Kar quote?
Click to expand...

I tried to blue shift the Liandra in Photoshop and didn't like any of the results. It made it hard to recognize that you were looking at the spaceship. I did make her a bit smaller, consistent with the Liandra actually being a small ship.

This is a great idea!

This is my first edit using a stereo, mediocre bitrate, source. And boy is it a headache! No easy way to separate anything. To make it harder, the film score wasn't released on CD.

I need a break! I've been looking at Rangers too much.

If anyone is interested in giving this edit a critical test drive, please PM me.  :idea:
I think I'm done, but I'd love a second opinion on the overall pacing, audio transitions, and anything else that jumps out at you.

@"Zarius" , I'm trying to PM you about my B5 edit, but your mailbox is full. The system refuses to send my message. Let me know once you free up space (remember to empty your trash, I often forget that), and I'll PM you.

@"lapis molari"  Thanks for notifying me, I've freed space up

Just finished it. Great work if anything was missing, I wouldn't have noticed, everything made sense, pacing was tight, it just breezed past. Didn't detect too many weird transitions either.

Just finished it. Great work if anything was missing, I wouldn't have noticed, everything made sense, pacing was tight, it just breezed past. Didn't detect too many weird transitions either.
Click to expand...

This is crazy fast feedback! Did you start watching the minute I PM'ed you? I love it! Thank you.

Can you list timecodes of the transitions that felt weird to you? I'll take another stab at turning those into "didn't detect any weird transitions".

It was a relatively fast download, and I had free time, so yep, I fired it up almost instantly.

I think I heard something at 19:40, let me know if that was originally in the mix or not, it might just be my ear picking things up weirdly, but I'd like to be sure.

19:40? That's the captain talking to a Minbari > exterior shot of escape pods. I don't hear anything off. Did you mean a different time?

I thought I heard something with the music, but if you don't think there's a problem, it may have just been me.

Zarius said:
I thought I heard something with the music, but if you don't think there's a problem, it may have just been me.
Click to expand...

I certainly trust your ears, but I don't know your equipment. I've noticed e.g. that VLC on my Windows 10 is too forgiving when checking for imperfect audio transitions. I use Subtitle Edit for final sound check, exactly because it's not a perfect player: smaller flaws aren't smoothed over in the player.

Including @"memoryblau" 's eagle-eyed observation of the overscan lines. See white line in this pre-crop image. 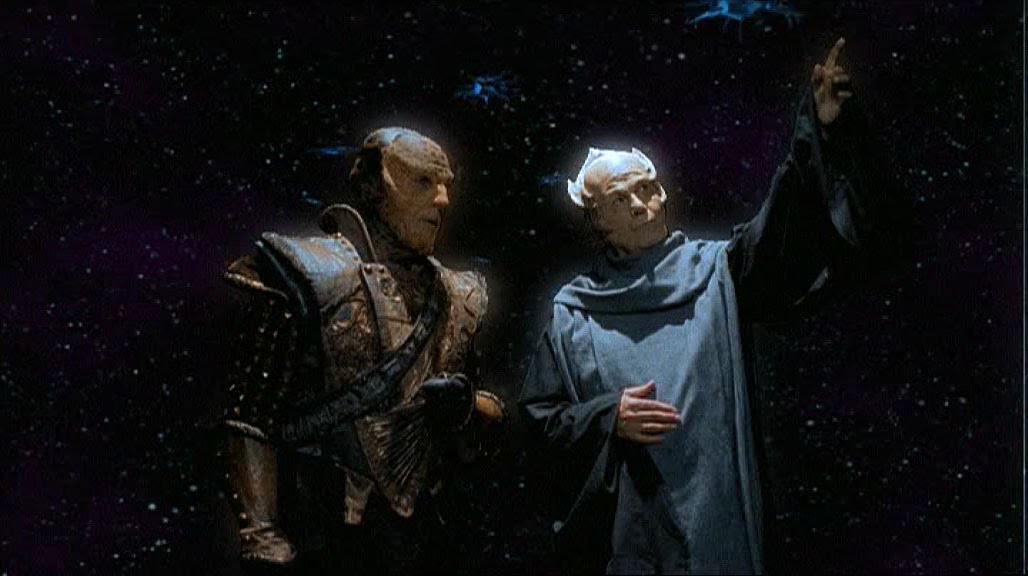