River of Souls has a great premise: Is death really the end, and how disastrous are the consequences if you're wrong? Add a Soul Hunter and examples of primal human nature. Add guest-stars Ian McShane, before Deadwood fame, and Martin Sheen, before West Wing fame. This could have made a stellar episode!

At movie length, however, it feels stretched. And tonally off: RoS has more cheap jokes than any other B5 story. The goal of this edit is to:
1) cut the cheap laughs,
2) tighten the pacing, and
3) replace the closing music with Season 5's closing theme. JMS says in the commentary that he loves the funky music, but it never worked for me. It's replaced with the rock-cover version of the Season 5 theme.

While only 3 minutes are cut, the improved focus and pacing give the feeling that more was cut:
- Opening: trim Klaus' back-talk.
- Cut "not die for your whispers", shift assistants as cutaway shot.
- Replace disappointing TNT opening title with Season 5 opening titles, trimmed to avoid double-listing the actors.
- Trim holo-pimp to be less annoying.
- Cut hostility between Bryson and Garibaldi during meal.
- Trim Bryson with orb.
- Trim Zack with pimp.
- Cut Garibaldi's and Bryson's hostility at room door.
- Cut Zack's cough when the Soulhunter arrives.
- Cut lawyer in Captain's office (at 48 minutes).
- Cut pimp mentioning his lawyer to Zack and Garibaldi (at 1h12m).
- Trim Captain holo jokes.
- Multiple small trim in the second half for pacing.
- Dub Season 5 theme (rock cover by Heropoint) over end credits (the original music can still be heard on the Commentary track).

Some gags around the holo-brothel are trimmed or cut, but the gist of it remains. JMS is right on the money when he says that the holo-brothel just goes to show that, no matter what the invention, man will find a way to have sex with it.

The commentary track by JMS, director Janet Greek, and Tracy Scoggins is retained (trimmed to fit the edit's length). 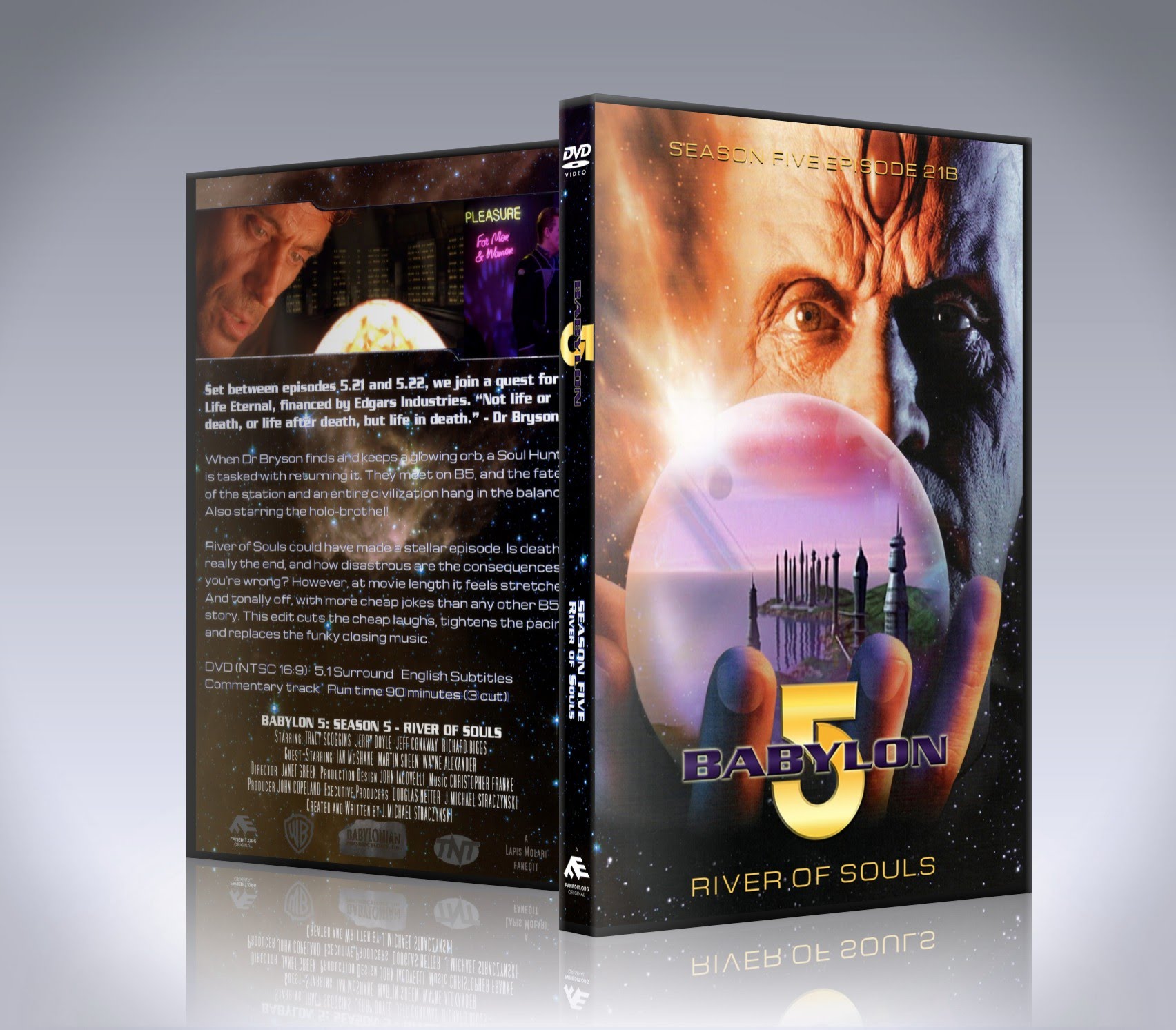 The longer original encounter gave the impression that JMS had bad experience(s) with lawyers in the 1980s and here was his chance to make them sound like caricatures.

By making the holo-pimp less of a sleazy stereotype, we can enjoy the humor of the scene better. Password: fanedit.org

The opening titles of TNT's B5 movies are a blink-and-you'll-miss-them disappointment. They look like a TNT intern asked "Ehm, shouldn't we have opening titles in these new B5 movies?" To which the answer might have been "Oh... yes. But we're out of time and money. Why don't you make something before the end of the day?"

To remedy that, River of Souls gets the rousing Season 5 opening titles. Trimmed to prevent duplicating the actor cards. The music is trimmed to fit (yes, I made cuts in Franke's theme), the commentary track is expanded with JMS' relevant comments on the s5 titles (taken from s5e20).

Nice job. Reminds me of old tv intros that did the same thing just to get the thing aired faster.