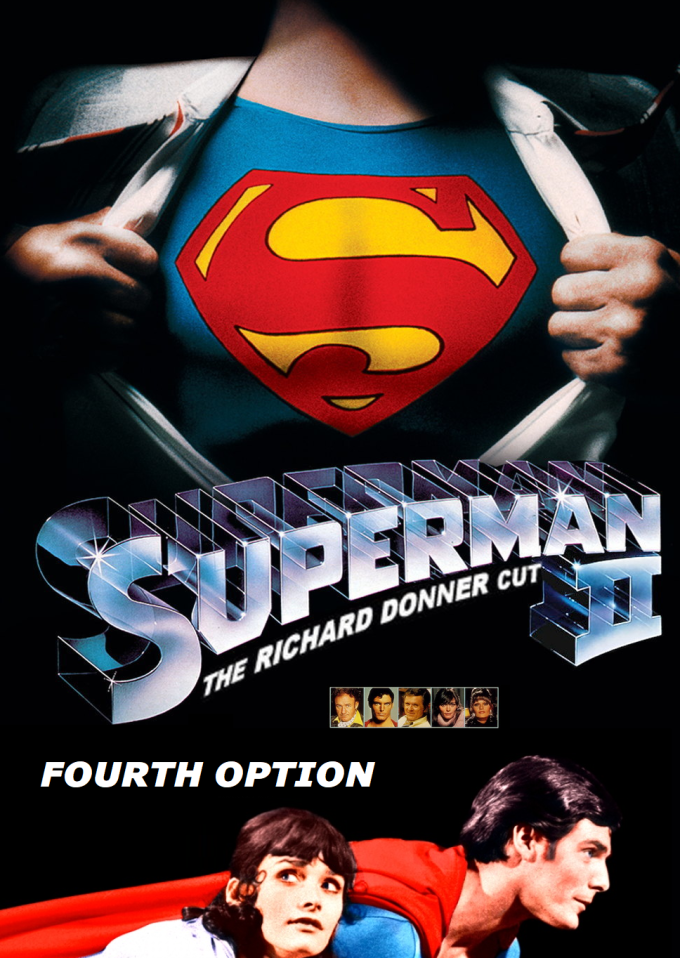 Inspired partially by a scene from  the ending of the Superman II redux by @"booshman" , this "fourth option" edit allows you to view the Donner cut of Superman II in almost it's unaltered entirety with yet another alternative outcome, one that does not include the time travel, amnesia kiss, or even the heartbreak of a Lois/Clark break-up. I've grown up a Lois/Clark fan all my life and am a huge fan of their relationship in the comics, and they've never walked out on one another there. They're one of the strongest, most durable married couples on the printed page and I want my movies reflecting that godammit!

Because it's April Fools Day (and for future April Fool's occasions), I decided to include the "Superman II as originally shot and intended to be filmed" credit at the beginning of the movie rather than do away with it, that way you can trick people into thinking this is indeed the story the director wanted to tell or surprise them with the fact that it's a fanedit!

Zarius said:
They're one of the strongest, most durable married couples on the printed page and I want my movies reflecting that godammit!​
Click to expand...

I know your pain.

This edit is up up and away on ifdb now:

Awesome edit. Really nails the tone of the Donner movies and removes the more annoying/unnecesary elements. My favorite edit of Superman II so far. Thank you for this.

Jax20 said:
Awesome edit. Really nails the tone of the Donner movies and removes the more annoying/unnecesary elements. My favorite edit of Superman II so far. Thank you for this.
Click to expand...

Thanks very much. Just shows how the trimming of only a few minutes can make all the difference to a film. Glad you liked it.

Bumping this to you guys know I've gone in and tweaked the original release slightly. The new special edition contains the following changes

1. Lex and Tessmarcher's arrival at the fortress now takes place while Lois and Clark are sleeping together

2. When Lex activates the crystals in the fortress, Jor-El immediately begins talking about the Kryptonian criminals. No "trees" poetry. Toilet gag is still included.

3. Clark destroying the fortress restored. There is no break-up speech. They share a kiss and we crossfade to the Daily Planet.