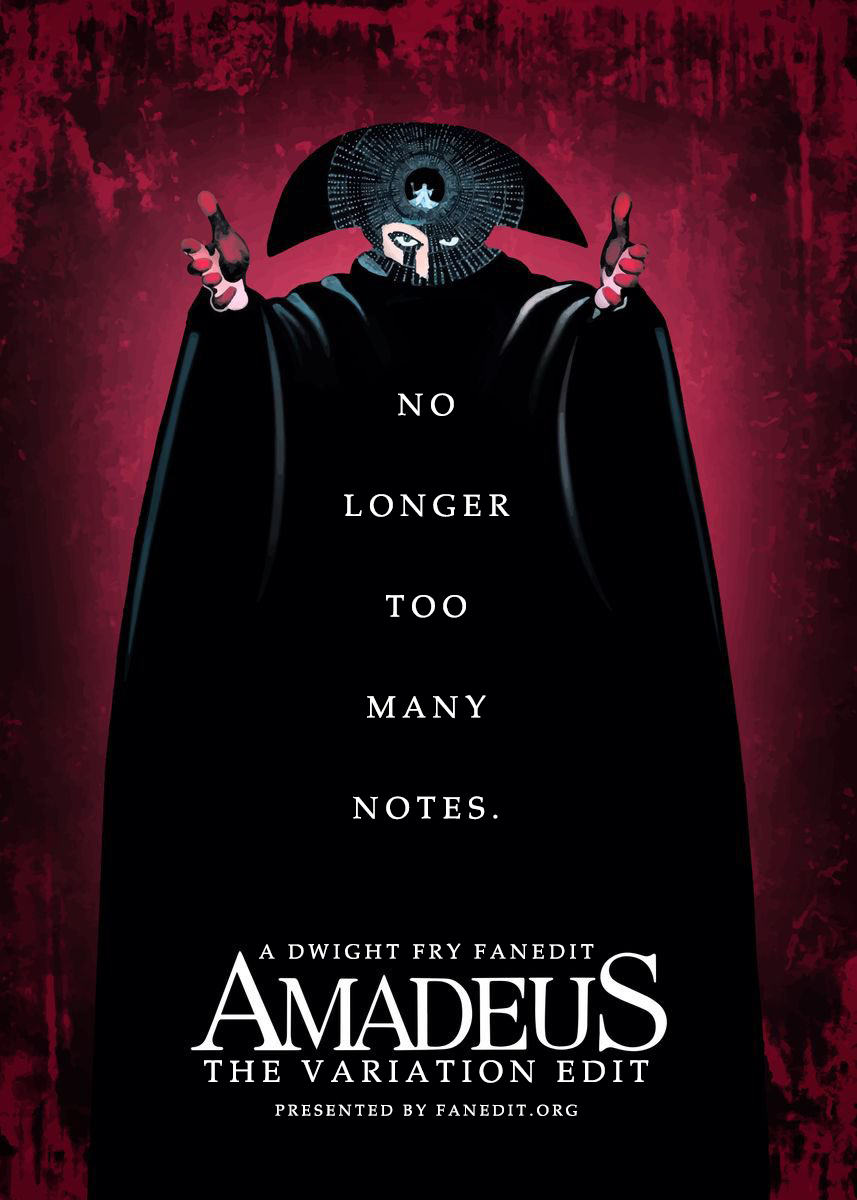 This is pretty much a hybrid version of the 1984 theatrical cut of Amadeus and the 2002 Director's Cut. Consensus, with which I agree, is that the former is far superior to the latter, and that most of the new material adds nothing but running time and destroys the pacing. However, those who defend the Director's Cut do so on account of the extended scene featuring the full arc of Constanze's meeting with Salieri and the subsequent humiliation, painting the character in a completely new light. I myself am ambivalent on the subject: the scene is valuable but sometimes I tend to prefer the shorter version from the theatrical cut, which results in her being the one character who sees through Salieri and is aware of how nasty he really is, without having to experiment it in full. In any case, this edit is intended for those who desire to have the full Constanze segment integrated into what's otherwise almost exactly the theatrical cut. I also left in the short scene of Salieri praying Mozart away, which I think should always have been in the film, due to the ironic echo it has in the following scene via the Archbishop's reply.

The idea for this edit came from Reddit user RandomDigitalSponge aka WellesRadio, who posted asking if such a cut existed, and I decided to do it myself, if only as an excuse to revisit one of my favorite films ever. Very special thanks must go to @TM2YC , who made the superb HD reconstruction of the theatrical cut, by far the best version of the film available today, and was kind enough to let me use some of the material from that edit, as my attempts to recreate it from scratch were not nearly as successful.


- Added FE.org logo at the start.
- Removed CGI Warner Bros. logo. It's a 1984 film, and modern logos in those always look jarring to me.
- Used TM2YC's version of the title card, customized for this edit, and of the supporting cast credits sans Kenneth McMillan.
- Cut DC shots of Salieri telling the priest about his first meeting with Mozart.
- Cut the Emperor's line asking about Mozart. Left in part of the shot to approximate how the scene plays in the theatrical cut, but the scene opens on the Emperor listening to the reply.
- Cut the extra DC part of the Il Rapto del Serrallo stage scene after Katerina leaves, and the subsequent dressing room scene. All it does is reiterating what we just learned.
- Cut whole Michael Schlumberg segment.
- Cut DC extra shots of Mozart welcoming his father.
- Cut DC extra shots of the partygoers laughing for longer after Mozart's Salieri parody.
- Cut drunk Mozart asking Schlumberg back for work. Used the audio of TM2YC's version for the transition to get rid of an unwanted voiceover.
- Added acknowledgements (WellesRadio and TM2YC) to the start of the end credits.
- DC end credits scroll used, but tweaked in Photoshop to remove cast credits for Kenneth McMillan, Cassie Stuart, and Rita Zohar, neither of whom appear in this edit.
- Removed final CGI WB logo, for the same reason as above.
Already available, in both a 17.1GB version and a 5.7GB one. Both files have optional English and Spanish subtitles.
You must log in or register to reply here.
Share:
Facebook Twitter Reddit Pinterest Tumblr WhatsApp Email Share Link
Top Bottom