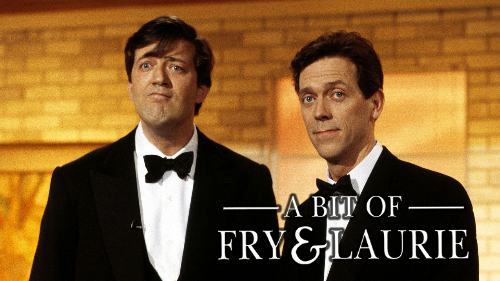 I've owned the boxset of early 90s sketch show "A Bit Of Fry & Laurie" for a number of years but have only watched it all once (FYI: This is Hugh Laurie from 'House' and Stephen Fry from 'The Hobbit'). Despite me loving so many of the sketches (Almost on the same level as 'Monty Python') there just isn't enough truly great material across the whole 12.5 hours, to make rewatching them appealing.

So I've finally done what I've been meaning to do for a while and create a couple of DVDs with just the best bits. Two infact, one DVD for S1&2 and one DVD for S3&4. Happily there is around 2 hours of solid gold comedy in both (So if you know your maths, that's about 8.5 hours removed ;-)). I've also made the sketches menu-selectable, something that is sadly not an option on the official DVDs.

This may be a project that only interests me but I'll share it just incase there are any other Fry & Laurie fans here.

Here are a few general changes:

- All but two of the opening/closings are retained (Obviously)
- All the spoof "Vox Pops" are removed. They are quick fire gags that don't have the re-watchability of the full sketches
- I have not included any of the "Tony and Control" sketches as I never found them funny
- None of the "Dammit John!" sketches are included as I feel they are only funny through repetition and if I couldn't include them all, I thought it better not to include any
- All fades to black and other assorted transitions removed. The sketches just quickly flow into the next one. Additional laughter and/or applause was added when needed, to smooth over the numorous new edits
- The sketches mostly feature in broadcast order but I've often re-ordered them for variety of staging, subject and length
- Some running gags like the "Man who thinks he's stolen their sketches" or the "Snearing critics" have been stretched out across the whole run, rather than being confined to the single episodes
- The original 'Erich Wolfgang Korngold's 'The Sea Hawk' music has been restored to the "Tony of Plymouth" sketch (It was removed from the DVD for licensing reasons and the sound in the sketch was ruined)*
- All of the spoof "Chat show" format from the 4th series is gone

I did comment recently about me sometimes not watching my own projects :-D. But this is made to be re-watched on a monthly basis... I know I'm gonna watch the sh*t out of it! 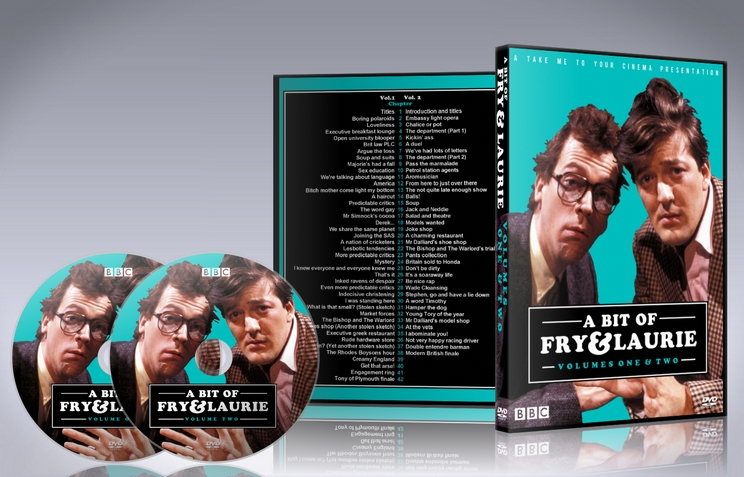 * Here is the "Tony of Plymouth" sketch restored with the original broadcast audio (And the DVD image)...

Definitely interested in this! I am a big fan of their work together, and I'm really looking forward to seeing what you've done

Great Idea this......I always enjoyed Fry and Laurie in the Blackadder Series, Jeeves and Wooster and less so in A bit of Fry & Laurie but as got older I became to enjoy there sketches more and more. Having a 'Best Of' is a interesting idea and i look forward to giving this a spin.........Cheers.

Glad there are a couple of fans here ^ .

Both Volumes/DVDs are available now and I've just listed the edit on IFDB.

Nice. I've been meaning to check this series out. Looks like I'll have to buy that set, then watch this version.

Tony of Plymoth should appear on Question Time

Both DVDs are now available at the other place.

I've had it for a while, but not watched it yet. (also have Alfresco and not watched it yet, but will probably go with The New Statesman after I finish the Bottom live shows) I dunno whether to watch it as-is first or this creamy version. At any rate, nice to see it here. Thanks for upping the funny quotient here.

Ripplin said:
I've had it for a while, but not watched it yet. (also have Alfresco and not watched it yet, but will probably go with The New Statesman after I finish the Bottom live shows) I dunno whether to watch it as-is first or this creamy version. At any rate, nice to see it here. Thanks for upping the funny quotient here.
Click to expand...

'New Statesman' is fantastic, not as good as 'Yes Minister' but still. Heard 'Alfresco' was good but not seen it myself.

I probably won't watch the original DVDs again now I've got this "best of" but I do suggest watching the originals once, as there is some funny stuff you'll miss due to repetition (I pretty much only included one version of each sketch). Also you'd be missing out on the many "DAMMIT JOHN!!!" sketches I didn't include.

TM2YC said:
'New Statesman' is fantastic, not as good as 'Yes Minister' but still.
Click to expand...