Deadline reports that Richard Gere is being courted to star in the upcoming The Best Exotic Marigold Hotel sequel, tentatively sub-titled Age of a Smarmy Yet Charming American.

In other news, a The Best Exotic Marigold Hotel sequel is apparently being planned. The surviving characters from Part One are expected to return. Also confirmed to reprise her role as Gere's wife is Julia Roberts. Crossover shared universes! (Okay, not really.)

what? this really really really doesn't need a sequel. I enjoyed the original, but don't need to see more. Plus Richard Gere is an automatic reject.

What is this? It's not April 1st yet.

terrible. lazy Hollywood cashing in on a successful film. This isn't that surprising when you take a look at the money side of things, but as far as stories go, this is dumb.

Gere and Roberts will want more than the $136M gross.

I gave the OP a +1 for the hilarious thread title.

The Roberts part was a joke.

I think this could well make for a very decent Redbox rental like the first, but I gotta say that I'd really love it if it pulled cinema's biggest-ever genre shift, and the characters pulled off a crazy heist.

TV's Frink said:
I gave the OP a +1 for the hilarious thread title.
Click to expand...

I thought this was going to be about another fast and furious sequel, no really. Maybe that was Gaith's plan all along. I catch on pretty slow.


Aw, c'mon, Throw, you wouldn't want to see this gang pull off a heist in Bangkok? Complete with a The Rock as his F&F guy cameo? 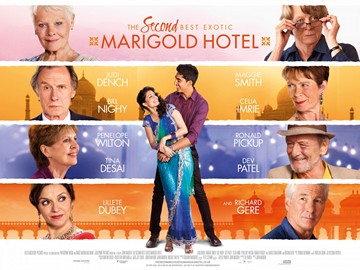 As critics have noted, the story basically operates on sitcom-level plotting and misunderstandings, but just about all those issues get resolved a half-hour before the movie ends, and the jokes dry up even before that. And in that last half-hour, we get... very little. Anyway, Gere is fine, but his character is kind of creepy.

Despite being a box-office success, albeit not as much as the first, the director has said that this is it for the series, mainly due to the age of the cast. Just as well. As for this sequel, it could use some serious fan edit liposuction to remove a good 40 or more minutes. Just hanging out with the awesome cast and beautiful sights is again delightful for a while, but... yeah.